Variety the Children's Charity to Expand ‘My Bike’ Initiative

Next up: adaptive bicycles for more children with disabilities throughout Pennsylvania — and in West Virginia, too. 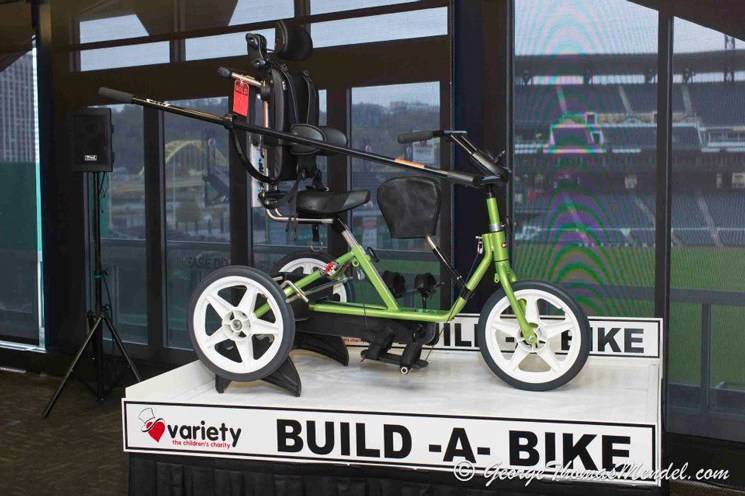 Last November, Variety the Children's Charity launched its My Bike program, which provides adaptive bicycles for kids with disabilities, to ensure that no child misses the opportunity to go riding. Special bike features may include the addition of a third wheel for added stability or buckles on pedals to help keep feet in place.

The My Bike program will continue to grow: Variety announced at its annual gala that 75 more cycles have been added; this development will allow for the program to expand its reach in Pennsylvania and start aiding kids in West Virginia, too. Also at the event, Andrea Carelli, co-chair of My Bike, received the Variety Advocacy Award for her efforts to get the initiative up and running; the funds she donated at the program's inception were used to purchase the first cycle.

Thus far, My Bike already has impacted the lives of more than 350 children with disabilities.

For more on the program, check out this recent episode of WQED's "Pittsburgh 360" program; the Variety portion begins at 11:20.

The term endangered is generally associated with species — as in those cute mammals that are near extinction.

But what about some of the artwork on display at a local museum. Ever consider that?

As part of a campaign presented by the Center for Conservation of Art and Historic Artifacts, you — yes, you — can help save a pair of local artifacts that are listed in the state's Top 10 endangered list. (Wow, that was a mouthful, huh?)

How can you assist? Visit PATop10Artifacts.org by 11:59 p.m. to vote for, donate toward or spread the message about the following items:

By voting, donating or sharing information on social networks, your campaign of choice gains a point; the campaign with the most points is deemed the People’s Choice Winner. All organizations that meet their target fundraising goals can begin preserving the relics.

Congrats to the talented James Wolpert, a former Carnegie Mellon University student who moved to Los Angeles to pursue his dream of being a world-class crooner. After surviving this week's knockout round on “The Voice,” Wolpert is one step closer to that dream. He’s made it into the final 20 and received compliments from judge Adam Levine.

Now the real fun starts. Wolpert will have to prove himself with live performances starting on Monday.