The Strip District is within walking distance, Heinz Field is a stone’s throw away and the view of Pittsburgh’s downtown skyline is an urbanite’s dream.

Nancy Lynches has loved every place she’s lived: Mount Washington, Edgewood, Sewickley—even southern California. But none has suited her quite like downtown Pittsburgh. “I looked for five years,” she says. “One of my dearest friends from high school is a real estate agent, and I dragged her everywhere—Squirrel Hill, Shadyside, Oakland.” As lovely as those neighborhoods are, her thoughts kept returning to downtown.

Decades ago, straight out of high school in West Mifflin, Lynches signed on to her first job in downtown Pittsburgh. She took to the energy of city life instantly. But it wasn’t until last summer when she moved into a brand-new unit at Piatt Place that the Golden Triangle finally became her home.

Today, she revels in walking just a few blocks to her office in Oxford Centre, where she is the branch manager and senior vice president of investments at Wells Fargo Advisors. “During the blizzard, I walked to work. I felt a little guilty,” she says, knowing that while others struggled on icy roads, “I just put on my snow boots.”

She and her husband, David Marrangoni, who is the vice president of marketing at Baierl Automotive, enjoy walking to the Strip District for breakfast on weekends. They walk to Steelers games, Penguins games and the theater. “We come out of the opera, and it’s like, ‘We’re home!’ This is too cool.”

Lynches says Piatt Place’s small size—which occupies just the top three floors at 301 Fifth Ave. on top of the old Lazarus department store building—makes it feel more “like a small town” than a towering high-rise. Neighbors chat at the on-site fitness center and drop in for visits. Friends from elsewhere around Pittsburgh often come by before or after going to dinner or a show. “I’m not always having a party, but often someone comes over for a drink,” she says. “There is so much more social energy here than anywhere else.” 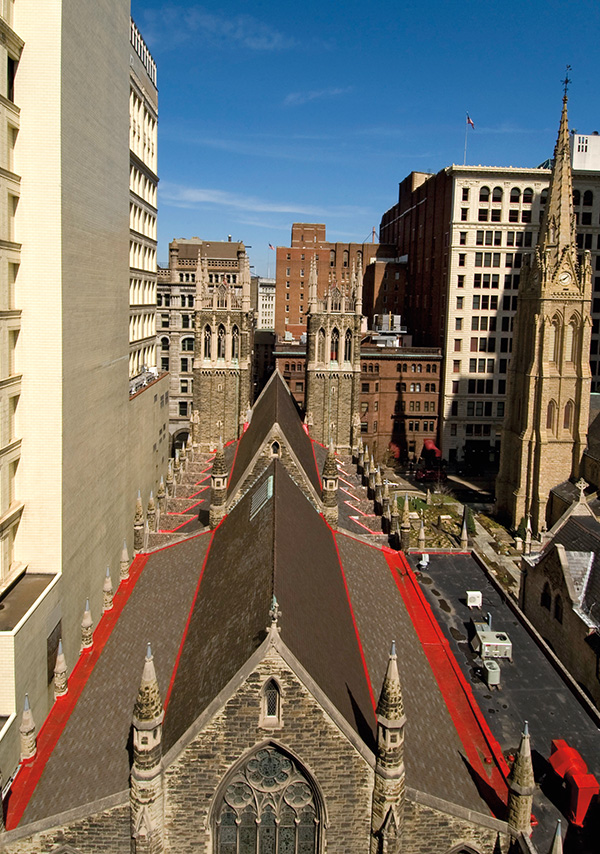 City life, of course, isn’t perfect. Gas stations and supermarkets aren’t exactly on every corner. But the lifestyle has become easier since Right by Nature opened in the Strip, Lynches says, “and you learn things like, ‘Hey, CVS has eggs. Mancini’s Bakery has pasta and sauce.’” But the couple usually drives to the suburbs to shop on weekends.

Another challenge: Upscale dining abounds, but places such as “Subway, The Pita Pit or the little Chinese restaurants are not open in the evenings because they cater to the business crowd.”

In choosing her location, Lynches wanted a large terrace for cooking outdoors (not all buildings allow that) and craved a view of more than just tall buildings. It wasn’t easy, but she found a unit with an ample terrace overlooking the spires of Trinity Episcopal Cathedral. “You almost could be in some European city,” she says of the striking view.

Next came the challenge of limited storage space. The couple opted for a three-bedroom condo then redesigned it as a two-bedroom with a storage room. Taking advantage of the 10-foot ceilings, they installed kitchen cabinets that extend to the ceiling. And they eliminated clutter: “This is 75 percent of the space we had in our last house,” Lynches says, so some things had to go. But “it felt good to let go of stuff.”

And to balance the sleek, contemporary design of their downtown home, Lynches and her husband recycled furniture from their suburban residence in Sewickley.

Downtown living, Lynches admits, isn’t for everybody. Even she gets wistful talking about missing the sight of leaves turning golden in the fall. But after years of searching and months of designing and building, Lynches has finally found her dream home.

This article appears in the May 2010 issue of Pittsburgh Magazine.
Categories: Style