The rooster, which had become a neighborhood nuisance, had been on the run for several months. 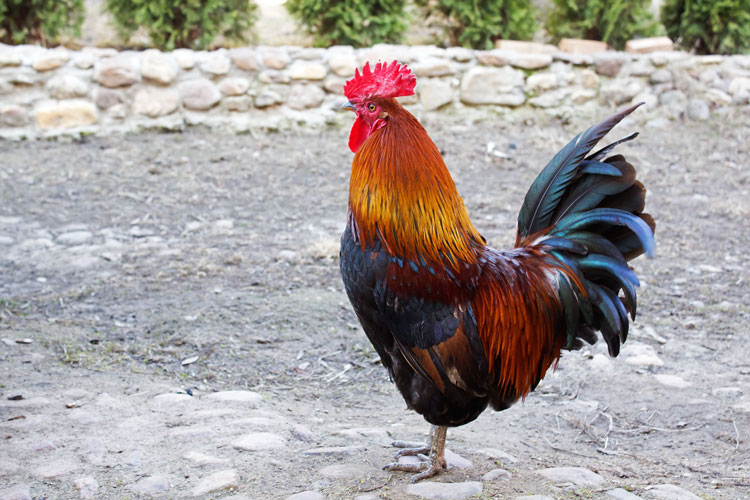 A noisy rooster named Rudy, who likes to start his day around 4 a.m., is moving from Pittsburgh’s Hill District to St. Louis after his well-publicized weekend capture.

The mischievous rooster (similar to the one pictured above) had for months been squatting on the corner of Wylie Avenue and Robert Street, violating city code dealing with urban agriculture. Animal Control officers several times attempted to capture him but Rudy always managed to make a deft getaway.

Frank Cantone, who runs St. Louis Chicken Rescue, learned about Rudy through news reports and drove to Pittsburgh over the weekend to see if he would have any luck attempting to nab the wily fowl.

Their first attempt, on Saturday night, failed when the rooster climbed into a tree beyond the Cantones’ grasp, KDKA-TV reported.

Sunday morning, with fresh snow on the ground and — vitally — a hen by their side, Cantone and his daughters tried again.

“Roosters are like men. If they see a pretty woman or a pretty hen, they will chase her,” Cantone told KDKA.

The hen proved effective; Rudy was spotted on the ground. After a brief chase, Felicity was able to scoop him up.

Cantone admits that Rudy is one tough bird.

While he may have lost his title as Avian King of the Hill, Rudy may have a second career as a social media star. Cantone plans to create Rudy’s own Facebook page when they return to St. Louis.

In the wake of a heated election, maybe “love is all we need.”

Pittsburgh-native Margot Bingham, who we profiled in our April issue, is teaming with various New York City musicians to produce “Feel Good Studios.” The YouTube channel aims to spread the love by covering what entertainment entrepreneur Scott Dunn describes as positive, uplifting and socially relevant music.

Songs include covers of hits from Bob Marley, John Lennon, Whitney Houston and others.

“Our culture is experiencing such a divide and we believe these classic songs can once again reunite our community,” says Dunn.

Three videos have been uploaded with more on the way. You can see them all here.