Wedding Day disasters are nothing new in Pittsburgh. 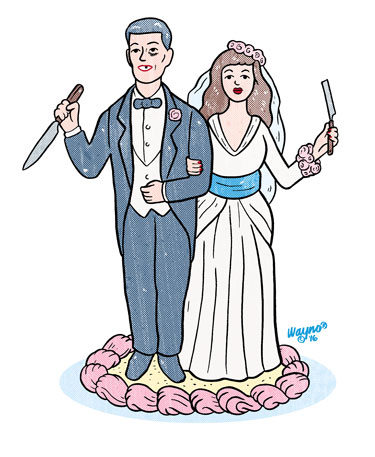 While no one can spin a tale from the days of yore quite like Sophia Petrillo of “The Golden Girls” fame, let me give it a shot.

Picture it. Canonsburg, 1886. The occasion is a joyous one. Charles Cochran, a school-desk seller whose office is on Smithfield Street, and Lizzie Dunlap, the daughter of a wealthy farmer, are set to be married. The myriad guests are assembled in the church. The groom is at the altar with the minister. Here comes the bride.

Dearly beloved. We are gathered here … to announce that the bride and groom have been married for a year, and I officiated at the ceremony.

According to “Pittsburgh Daily Post,” this is exactly what happened, and reportedly, the guests were stunned into silence but recovered quickly to congratulate the pair who were “delighted at the astonishment they had created.”

Why they married a year earlier, and how they hid it from their families? Your guess is as good as mine because that information wasn’t shared. What was shared? The bride’s mother was reported to have become “somewhat indignant.”

That’s likely a gross understatement because if I did that to my mother, she would have flown to the altar carried aloft by bats from hell and screeched at me in a voice so horrifyingly loud the actual gate to Hades would have slammed shut in fright. You think I’m exaggerating, but I’m as serious as a Cap & Cheese.

The Cochran/Dunlap “wedding” of 1886 is just one of the many unusual wedding stories I found in the archives of Pittsburgh’s newspapers — stories such as these:
Today on Jerry Springer…: Picture it. Pittsburgh, 1854. “The Pittsburgh Gazette” reports a “gentleman” named Ralph Hutchinson left his wife and eloped with … wait for it … HER MOTHER. He was arrested and brought before the mayor, but his current wife, the daughter, refused to press charges and he was released to her.

I imagine she also was “somewhat indignant.”

Saddest wedding advice ever: “The Post-Gazette” ran a celebrated advice column by the renowned Emily Post, who in 1940 received a letter from a 27-year-old widow who wished to remarry in a double ceremony with her sister, a maiden bride. The widow asked Post how to properly present such a wedding. Post responded in part with, “My answer to this is that your parents send out conventional invitations to your sister’s wedding, and that no mention be made of yours.”

Most violent end to a wedding reception: In 1904, the “Pittsburgh Weekly Gazette” reported that a Polish wedding reception on Liberty Avenue ended in bloody fashion when 40 guests, men AND WOMEN, participated in a fight involving knives and razors. Three people were taken to the hospital with one victim “slashed about the head and face with a knife.” I will never rest until I know what they were fighting about. I hope it was pierogies.

Most humorously reported violent end to a wedding reception: In 1909, a Slavic wedding reception on the North Side ended in a “lively raid” when police arrested 24 men “who were celebrating … with a free-for-all fight.” Free-flowing beer brought about some disputes in which “bottles, chairs, clubs and stones began to fly through the air.” I don’t know what a “lively” raid looks like, but I hope the band played on as it was happening.

Most hellish woman scorned: Poor Moick Hnatojko, who in 1909 was celebrating her wedding to John Hlywiak at the rear of their South Side home. Festivities were in full swing “with silver dollars being tossed in the air” when a constable arrived and inexplicably arrested the groom. At the police station, Moick wailed as she was torn from her new husband’s arms and taken home in a “fainting condition.” It came out that the groom previously had been engaged to his cousin and was told he needed to write to the “old country” to get permission from their families to marry. While waiting for word from home, he fell in love with Moick and married her instead.

In revenge, on the day of his wedding, the jilted cousin/fiancée went to the police and accused him of assault, forcing him to spend his wedding night in jail.

It appears she was … say it with me … somewhat indignant.

This article appears in the February 2016 issue of Weddings.
Categories: Bridal Buzz