The Lawrenceville pinball cafe offers new and classic games for you to play solo, or (as we were surprised to learn) in competition with a friend. 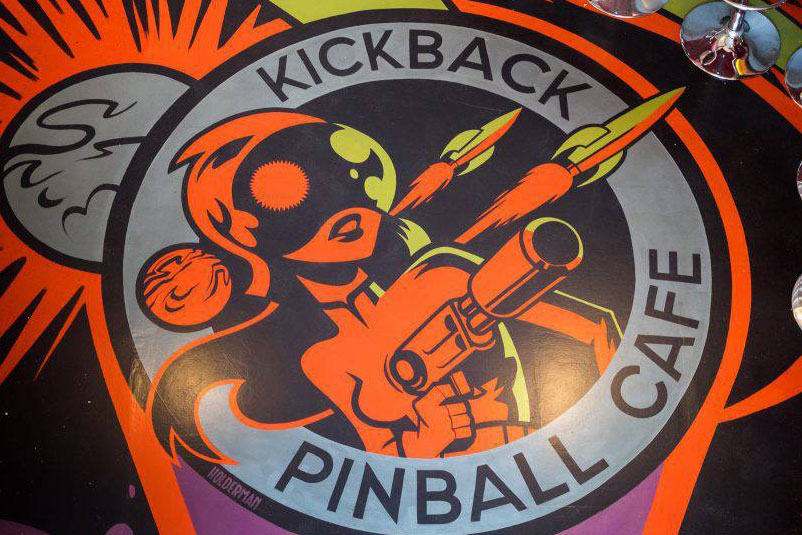 A seismic revelation was presented to me last week.

A post-dinner wander had led me, my girlfriend and another couple into Kickback Pinball Cafe on Butler Street. The couples divided up; they tried their luck at the Batman machine, we faced off with Deadpool. (Apparently, superheroes get pinball machines. We moved on to Iron Man later.) On our end of the room, she played a round, then I dropped in my quarters. Then I glanced back at our companions and the Caped Crusader.

They were playing a two-player round. You … you can play two-player pinball.

Not one flipper per person (though you could try that if you wanted); you put in two games’ worth of quarters, then go one ball at a time, vying for the top score.

I went 34 years without knowing that was a thing. And I’ve spent a lot of time in arcades.

To me, this significantly opens up the merits of pinball as a joint activity; until that moment of enlightenment, I only saw the silver-ball sport as a solitary activity, the kind of thing to while away some time as you waited for this or that. But now, it’s like mini-golf or bowling. It’s for friendly competition. This changes things.

In any case, whether you’re alone or with a flipper rival, Kickback is an excellent place to spend some time. Downstairs, a ring of newer games — the latest, such as the aforementioned titles and a striking “Munsters” creation, boast full-video displays — surrounds a cafe counter, where you can order a variety of hot and cold coffee drinks, shakes and sandwiches.

Upstairs, older machines dating back to the early days of the game line a loft space. This is where you can really lose a couple of hours, plunking 50 or 75 cents a pop down on a familiar favorite, learning the ins and outs of the ramps and bumpers. A Gen-X or Millennial player who bummed around the arcades of their youth will certainly recognize some of the immortal titles up here, like “Medieval Madness” and “Fish Tales.” (Don’t skip the surprisingly addictive “Popeye Saves the World,” though.)

Several of the games at Kickback, including a few brand-new machines and a few old-school choices apiece, take advantage of an app payment system called PayRange; you can load credit onto your account and pay for games virtually. There’s actually a small discount, and a loyalty system, through the app, so you’ll save a bit over coins. (You can also pay for game tokens at the coffee counter with your credit or debit card, if you prefer.)

The atmosphere at Kickback is undeniably inviting; it’s a thoughtful, well-designed space that makes you want to linger. The smoky, low-light arcades of our youth will always have a space in my heart; places like this, however, are absolutely better than their ancestors.

Seriously, though: Never knew you could play two-player games. Was this just me? Did literally all other people pick up on this at, like, age 8? I’m losing so much nerd credibility.