Undercover: ‘Watch the Doors As They Close’

Passionate writer Karen Lillis’ latest work is funny and full of musings from a relationship that has ended. 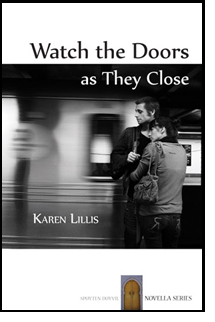 Watch the Doors as They Close
by Karen Lillis; Spuyten Duyvil; $10

Karen Lillis is one of the strongest advocates of Pittsburgh literary culture you are likely to encounter. A New Yorker by way of Virginia, Lillis moved to Pittsburgh in late 2005. Since arriving, she's become a fixture in the scene, attending and organizing readings, documenting small-press doings on her blog and creating the Small Press Pittsburgh website (which even provides tips for writers visiting the city, such as low-cost hotel accommodations).

With all that she does on behalf of Pittsburgh wordslingers, it's easy to forget that Lillis is also a very fine writer herself. Take, for example, Watch the Doors as They Close, the latest entry in the Spuyten Duyvil Novella series. The book, which tells the tale of a love affair that's ended, is arranged as a series of journal entries in which our narrator tries to reach a place of peace and understanding about Anselm, the man who left her.

At once a confession and an investigation, Watch the Doors as They Close documents an intense affair in retrospect. The book explores how the young woman deals with the absence of Anselm from her life, namely by obsessively recreating him in the pages of her journal by way of anecdotes, a spooling out of his family genealogy, copious lists of the things he hated (“birds, boxer shorts, mornings, ham, girly girls, ballet, the smell of mint, humidity”) and cataloging his ex-girlfriends as though she was curating a museum exhibition.

Lillis is funny and heart-wrenching in her portrayal of a person struggling to understand where it all went wrong, balancing anger and forgiveness sometimes in the same breath. It is possible to sum up Watch the Doors as They Close in a single word: human. And that is the finest thing I can say about any great work of art. 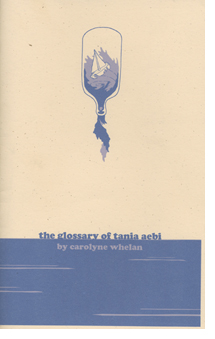 Between 1985 and 1987, teenager Tania Aebi circumnavigated the globe alone, becoming the first American woman and the youngest person to do so at the time. Prior to her solo voyage, Aebi was a New York City bicycle messenger. She recounted her landmark adventures in her memoir Maiden Voyage, which poet Carolyn Whelan uses as her entry point into the mind and soul of Aebi.

Arranged as a dictionary of sailing terms – anchor windlass, jib, sextant and so on – The Glossary of Tania Aebi imagines in brief, almost fragmented verse Aebi's journey around the world and into her own being. We experience her confusion as an inexperienced sailor on an almost existential level in the poem "Lost": “somewhere in the world, my Monitor wind vane is / not registering. I feel abandoned. I am off the coast of / someplace, but every place looks the same.”

Whelan's poems are spare, even austere, with nary a word wasted. The terminology of sailing frames defines Aebi's world, providing a structure to safely move her across the water and into her own self. The experience of a young woman at sea becomes a metaphor for the insignificance we can sometimes feel in our less-dramatic lives on dry land.