Undercover: 'Their Life's Work: The Brotherhood of the 1970s Steelers, Then & Now'

“Their Life’s Work …” is a necessary read for anyone with an interest in the Steelers and professional football. 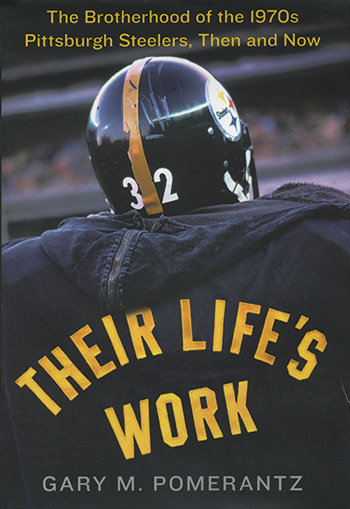 Watching the Pittsburgh Steelers this season has been an exercise in frustration. Injury after injury after injury. And that was just the first game! Is the team in a period of decline or one of rebuilding? Depending on the game you’re watching, it could be either.

It makes this writer long for the days of the legendary Steel Curtain. My earliest Steelers memories are of watching Mean Joe Greene smash through opposing linemen and, after the whistle blew, seeing Greene continue to stomp on his enemies. Will we ever see the likes of that team again? Listen to the music of the names — Jack Lambert, Frenchy Fuqua, John Stallworth, Franco Harris, Dwight White, Rocky Bleier, Ernie Holmes. That’s not a team; that’s more like Mount Rushmore. But as time continues to creep in its petty pace, the men who once looked as unbreakable as the steel for which they were named must succumb to age.

Chuck Noll, Steelers head coach from 1969-1992, had many sayings in the locker room. One that stuck over the years, which he often used when he felt the men were not playing up to their potential, was “your life’s work.” As Gary M. Pomerantz succinctly puts it in his excellent new book, “Noll was saying there would come a time, even for future Hall of Famers, when the game would end and the rest of their lives would begin. What will you do then?” “Their Life’s Work: The Brotherhood of the 1970s Pittsburgh Steelers, Then and Now” is the story of what happened next for these legends.

First Pomerantz provides the team’s history. Starting with The Chief and his acquisition of the squad in 1933, Pomerantz briefly takes the reader on a tour through the years of losing seasons until Noll’s 1969 arrival and the bedrock of the team’s wonder years. Pomerantz, once a sportswriter for “The Washington Post,” composes his prose in an unadorned, punchy style that fits the subject at hand. His coverage of the Super Bowl years — four championships in six seasons between 1974 and 1979 — puts the reader on the field and in the locker room.

While not quite the fly-on-the-wall team coverage outlined in Roy Blount Jr.’s seminal “About Three Bricks Shy of a Load,” Pomerantz’s book is every bit as essential — perhaps even more so because he takes us with team members after they walked away from football. It’s here that Pomerantz distinguishes himself.

For each success story examined, including John Stallworth’s multimillion-dollar contracting company and Franco Harris’ tireless charity work, there are also tragedies. The heart of the book, much like that of the team in its glory days, is Mike Webster. The indefatigable center was an unmovable rock on the field; however, once his football career ended, rootlessness and confusion took over his life because he suffered from a neurodegenerative brain disease after years of head-on collisions.

“Their Life’s Work …” is a necessary read for anyone with an interest in the Steelers and professional football. There are a great many pleasures to be had in the company of these men — in the tales of their youth and now in their later years. What may surprise you, as it did me, is just how moving the story of the 1970s Steelers remains.

This article appears in the January 2014 issue of Pittsburgh Magazine.
Categories: Arts & Entertainment, Things To Do