Undercover: 'The Odds' by Stewart O’Nan

Unemployed and upside-down on their mortgage, a struggling couple heads to a casino with their savings in a duffel bag. 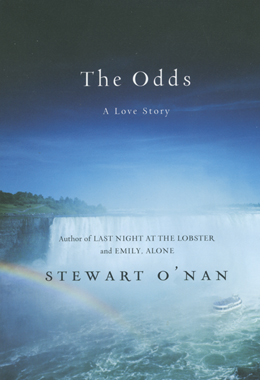 The odds of a marriage lasting these days aren’t necessarily great. The odds of Marion and Art Fowler, the couple at the heart of Stewart O’Nan’s slim novel The Odds: A Love Story, holding their marriage together are even worse. Unemployed and upside-down on their mortgage, they concoct a last-ditch plan to right their financial course: They book a bus to Niagara Falls for Valentine’s weekend, and with their freshly liquidated savings stashed in a gym bag and a “foolproof” system, they plan to win back their home at the roulette tables. Desperate times do indeed call for desperate measures, and while Marion is not nearly so sanguine about the plan, she goes along with Art for what she believes to be the last go-round of their crumbling marriage.

O’Nan’s prose warmly describes the Falls in the chilly clinches of February, taking in the sights and sounds — the hokum of wax museums and barrel riding daredevils as well as the naivete of new lovers and the gimlet-eyed ruminations of the sorely disappointed. Outnumbered by newlyweds on this most romantic of weekends, Art and Marion travel separate emotional courses in their company. Art believes he can win back Marion’s heart, even after the pain caused by his recently ended affair with a co-worker. Marion, hiding her own attempt at adultery, remains unconvinced: “Marion watched the lucky couple leaning in and whispering, laughing and touching, kissing for the camera. How young they were, how new. Today they were celebrities, set apart like royalty. She remembered the feeling and felt sorry for them, knowing it wouldn’t last.”

The Odds: A Love Story is a brief book that carries within its pages deep reservoirs of emotion. It is a very adult book, but considering its subject matter, it is never bitter and almost always surprisingly funny.  And sometimes that’s the best we can hope for in life and literature. 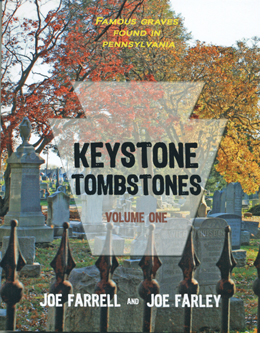 Apparently to be dead in Pennsylvania is to be in very good company. Farrell and Farley, a duo that smacks of a vaudeville comedy team, go merrily road-tripping across the commonwealth digging (not literally — more so in the beatnik fashion) the graves of the state’s favorite sons and daughters — or at least some of the more interesting characters who call the Keystone State their final resting place.

Farley notes in his introduction to Keystone Tombstones: Volume One that the pair originally planned on traveling the Lincoln Highway, and writing a book about their adventures and the sights seen and absorbed along the way — but his wife and her book group quickly nixed the notion. After reading famed sportswriter Red Smith’s classic collection of columns regarding the recently deceased, “To Absent Friends,” Farley spit-balled the new concept: cemetery tourism. “Of course, the first person I went to was my wife, and she thought it was a great idea. To what extent the fact that there are no bars in graveyards influenced her, I can only guess.”

Farrell and Farley are good traveling companions, curious and eager to unearth good tidbits of gossip and pocket history lessons. For our purposes, it’s the western interred that prick up the ears: congressman Dapper Dan Flood, riddle master Frank Gorshin, voice of the Bucs Bob Prince and wiggy weirdo of pop art Andy Warhol, just to name a few. As grave as their undertaking may be, Farrell and Farley never falter in being entertaining and informative. I even got a little choked up when they visited Myron Cope’s grave and found it adorned with a Terrible Towel.