Author Marcus Rediker tells the story of the Amistad by returning the focus to the Africans themselves. 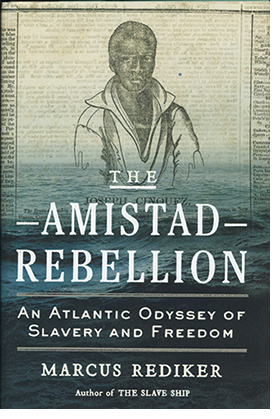 The Amistad Rebellion: An Atlantic Odyssey of Slavery and Freedom
by Marcus Rediker
Viking; $27.95

The Amistad Rebellion is the most famous successful slave uprising in American history. On July 2, 1839, slaves being transported from Sierra Leone to Cuba rose up against their captors and — armed with cane knives — took control of the ship. The slaves, led by Joseph Cinque, ordered the vessel’s navigator to return them to their homelands, but instead he piloted the ship north along the American coast, where the ship was captured near Long Island. The detainees were imprisoned in New Haven, Conn., where their famous trial took place. Eventually the case reached the Supreme Court, which in 1841 ruled in favor of the rebellious slaves and ordered them freed. In a country that wouldn’t see the end of legalized slavery for another 25 years, the ruling was nothing short of a landmark.

University of Pittsburgh history professor Marcus Rediker is the author of several books on Atlantic maritime history, including The Slave Ship: A Human History (2007). Rediker’s latest work, The Amistad Rebellion: An Atlantic Odyssey of Slavery and Freedom, acts as a counterpoint to the tragedy, horror and hopelessness documented in his earlier book. The story of Amistad has been told before in books and, of course, Steven Spielberg’s film of the same name, which garnered several Academy Award nominations. Those previous accounts of the rebellion and court case, however, told the story from the perspective of the Americans involved. As Rediker notes, “The drama of the courtroom has eclipsed the original drama that transpired on the deck of the schooner. The American actors — abolitionists, attorneys, judges, and politicians — have elbowed aside the African ones whose daring actions set the train of events in motion.” His book returns the focus to the Africans themselves.

During their 27 months in Connecticut, the captives met many thousands of people and were able to tell not only the story of the uprising aboard the ship, but also relate their life stories, which in turn appeared in detailed newspaper accounts, abolitionist pamphlets and court documents. Rediker takes full advantage of this wealth of information, creating clear portraits of the leaders of the uprising — Cinque, Faquorna, Moru and Kimbo — as well as the other captives.

The history of Amistad may have been told before, but in The Amistad Rebellion, Rediker tells the story from the point of view of the people at its center, and for the first time, readers are given the full account of the bravery and sacrifice of people who, in the intervening years, have become more symbol than flesh and blood human beings. The Amistad Rebellion is a true accomplishment. 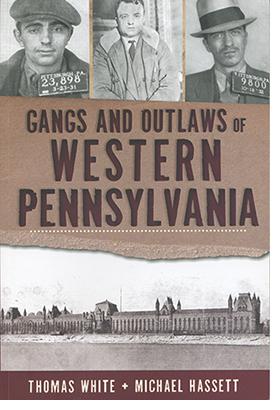 Gangs and Outlaws of Western Pennsylvania
by Thomas White and Michael Hassett
The History Press; $19.99

Crimes of a smaller, more local variety are at the heart of Gangs and Outlaws of Western Pennsylvania. If you’re looking for tales of shoot-outs, prison escapes, daring robberies, murders and kidnappings, then you’ve come to the right place. “[W]e chose to focus on the more brazen outlaws and gangs that tended to commit violent and sometimes public robberies (in the style of John Dillinger). These were the kinds of outlaws that led local historian C. Wallace Abel to label the area the ‘Wild, Wild East.’”

White and Hassett do not disappoint either. Don’t let the slim page count fool you — there’s a body count here high enough for a James Ellroy epic. The authors do a fine job of not only providing biographies for these nefarious felons, but also of sorting out fact from myth and supplying even-handed (but no less lurid) accounts of local legends like the Biddle Boys and The Flathead Gang.

We’re also treated to a few lesser-known criminals, like The Cooley Gang, which robbed and tortured its way across Fayette and Somerset counties, and Irene and Glenn, the Keystone State’s own Bonnie and Clyde. It’s a real page-turner in the best spirit of the old-style police gazettes.