Rudy Dicks’ latest work is a welcome addition to Steelers literature — a book that focuses on the dark-horse could-have-beens of the pre-Super Bowl era. 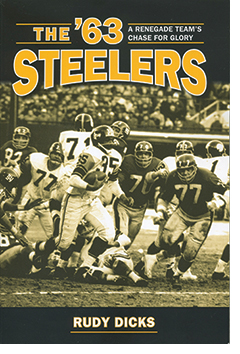 Pittsburgh was not always the City of Champions. As difficult as it might be to believe, there was a time when our beloved, perennial Super Bowl-contending Steelers were as woebegone as the Pirates are today. “The Chief,” aka Art Rooney Sr., started up the club back in 1933, and watched as the team underwhelmed opponents and football fans alike. The dynasty that we all know and love wouldn’t rear its ugly, bruised kisser until 1974.

Rudy Dicks’ The ’63 Steelers: A Renegade Team’s Chase for Glory is a welcome addition to Steelers literature — a book that focuses not on the glory years, but on the dark-horse could-have-beens of the pre-Super Bowl era. These Steelers were “a team of rejects, drinkers and brawlers, low on skill but high on pain tolerance.” Dicks takes us through that season, when the ragtag team was one game away from playing for the championship. He does an admirable job of providing the play-by-play, describing each wobbly pass and crunching defensive stop. Dicks also incorporates the biographies of the players — men with iconic soubriquets like Clendon Thomas, Ernie Stautner and Big Daddy Lipscomb.

The author engages in a little personal and cultural history along the way: Dicks includes nostalgic asides, recalling boyhood games of football played in suburban yards among friends. He also pairs the season with national events (particularly the Kennedy assassination) to signal the greater changes taking place in the country. 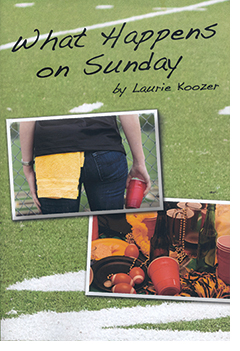 What Happens on Sunday
by Laurie Koozer
L. Koozer; $14.95

When I picked up the debut novel from local scribe Laurie Koozer, I had one of those “Why didn’t I think of that?” forehead-slapping moments. Koozer rather ingeniously sets her novel during the Steelers’ 2005 Super Bowl run, with every game of the season used as the narrative focal point of each chapter.

Her cast of characters, principally six women at various stages in their lives, is connected to the team’s fortunes in one way or another. Patty, a divorced mother of two, sends provocative underwear and notes of encouragement to a different player every week, while Angela is a high-school senior who has been branded by her family as a football curse.

Then there’s Shannon, who tends bar and is finding it increasingly difficult to hide her attraction to her sister’s boyfriend, and Megan, who’s spiraling downward from too much drinking and meaningless sex.

The characters cross paths, intersecting in often surprising ways, as they root for the Steelers, tailgate and party — or simply watch the games with family. Koozer juggles her characters expertly, and gives each one a distinctive and sympathetic voice. It’s common knowledge that the Steelers have one of the largest female fan bases in the NFL. It’s about time someone explored that. I’m glad it was Koozer.

What Happens on Sunday is a wonderful novel. And I still can’t believe no one has structured a novel around a Steelers season before. 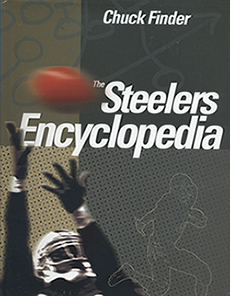 It happens every game: One of your buddies makes some innocuous comment regarding Steelers history, and suddenly everyone is up in arms. Perhaps your pal has mistaken Johnny Blood for Johnny Zero, or maybe you’re convinced he’s full of it for claiming a former Steeler sat on the Supreme Court.

Well, you (and the rest of Steeler Nation) are in luck. Chuck Finder’s The Steelers Encyclopedia is the perfect guide to have at the ready next time you need to settle an argument before half-time ends. A giant compendium of stats, player biographies, schedules and photos, this book should be in every serious fan’s home.

And just in case you’re wondering, Byron “Whizzer” White was the Steeler who went from the sideline bench to the highest bench in the country.