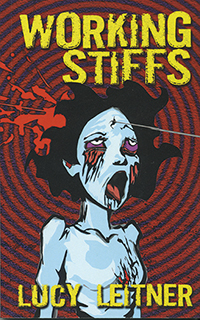 If I could attend one Halloween party thrown by an author, I think the one to go to would be at Lucy Leitner’s place. As the author of Working Stiffs (the fourth book in horror house Necro Publications Fresh Flesh series), Leitner seems to be having a lot of fun with her story. Where McGreevy retreats to a position of gothic self-awareness whenever he feels a smile coming on, Leitner revels in the brain-chomping craziness of her zombie apocalypse.

Working Stiffs is a sort of Shaun of the Dead for the East Carson Street milieu. Marshall Owens is a former meth dealer who turned his life around and created Pro-Well, a pharmaceutical company located in the heart of Pittsburgh’s moonshine mile on the Mon. Owens is cleaning up the streets, too, by kidnapping the panhandlers, runaways and punks; he injects them with his private stock of zombie juice and chains them to the Pro-Well conveyor line as flesh-eating scabs. Naturally, this army of deadheads gets loose and runs amuck, much to the delight of Tom Savini groupies everywhere.

Zombies are on the loose in the corporate offices of Pro-Well and on the streets of Pittsburgh, inviting Leitner to indulge in quite a bit of satire. For instance:

“They entered the bar in a parade of slow-moving slaves to Sundays, passing by his stool, slight groans escaping from their gaping mouths. All their faces held the same vapid expression, a vacant look focused above the bar. Steelers fans.” 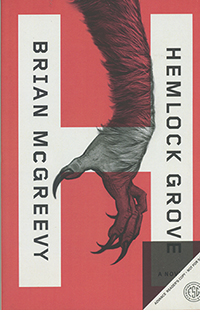 In Brian McGreevy’s debut novel, there’s a murderous beast loose in the small town of Hemlock Grove, Pa. Once the site of a prosperous steel mill, Hemlock Grove is now home to the White Tower, a mysterious biotech firm whose bizarre machinations may or may not be at the center of the brutal killings. McGreevy knows his horror tropes — werewolves, creepy castles, corpse reanimation — and deploys a veritable necronomicon of these old-school devices, often with a winking twist; for example, a character who bares more than a little resemblance to Frankenstein’s promethean creature is cutely christened Shelley.

Hemlock Grove follows teenage boys Peter Rumancek, a gypsy werewolf comically unable to keep his hirsute condition a secret from anyone, and Roman Godfrey, an emotionally unstable brat with somewhat vampiric tendencies, as they conduct their own investigation into the killings. Their friendship is rendered in a distractingly schizophrenic fashion; one moment Hemlock Grove reads like a farcical bromance dressed up in Dracula’s cape, and the next, it’s as queasily overwrought as a daytime soap.

McGreevy’s masterstroke may be his understanding of the frisson created by our post-industrial economy, in which shuttered steel mills decay adjacent to the antiseptic enterprises of corporate tech firms. There’s a rich vein of horror there ready to be tapped.

Hemlock Grove feels like the first bite of an ongoing series of books, as McGreevy displays enough verve and talent to warrant future installments. The book’s also getting the TV-series treatment, with episodes streaming on Netflix early next year.