"Rudolph" and "A Musical Christmas Carol" shouldn't have any trouble putting you in the holiday spirit. 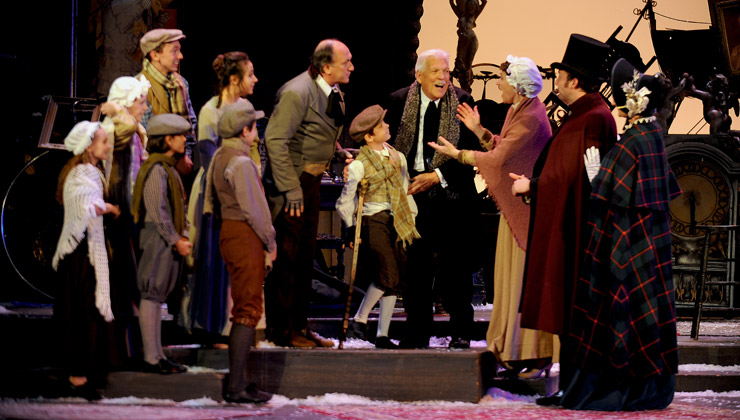 DOWNTOWN’S DICKENS TRADITION RETURNS TO THE BYHAM
What is it about Charles Dickens’ “A Christmas Carol” that endures from one generation to the next as a holiday classic? Perhaps it’s the hope that any Scrooge, no matter how sinister, might show up with a turkey on Christmas morning. Perhaps it’s the undoubtedly creepy, ghost-story aspect of the tale (because everyone loves a little Halloween chaser around December). Or maybe it’s the flexibility of the story — whether told with comedy, with heart or with Muppets, the tale works.

Through Wednesday, the Pittsburgh CLO presents its long-running take on the classic, “A Musical Christmas Carol,” at the Byham Theater, Downtown. The cast, led by local favorite Tom Atkins as Ebenezer Scrooge, features a long list of standout regional performers, many of whom have reprised their “Carol” roles for years. Get your tickets now (shows are expected to sell out) and see why Pittsburghers keep returning to see Tiny Tim again and again.
(101 Sixth St., Downtown; click here for showtimes and tickets)
— Sean Collier, PM Associate Editor

“THE FORCE AWAKENS” LIVES UP TO THE HYPE
Tonight’s public rollout of “Star Wars: The Force Awakens” certainly is the most culturally dominant movie event I’ve encountered as a critic. The fervor with which the series’ dedicated fans — and, obviously, moviegoers in general — have approached the film’s release is paralleled in recent memory only by the 1999 launch of the last “Star Wars” trilogy. Can a film stand up to this amount of hype? Can a 135-minute movie not only satiate legions of long-suffering fans but also deliver on years of media focus, more than $100 million in pre-sold tickets and enough tie-in merchandise and marketing material to envelop the Death Star? To put it simply: Yes. “The Force Awakens” is the movie you’ve been waiting for. Get a full review in this week’s edition of After Dark!

’TIS THE SEASON (FOR CLAYMATION CLASSICS)
Speaking of holiday trips downtown: Thanks to PNC Broadway in Pittsburgh, you won’t have to dig out the VHS tapes to enjoy Rudolph the Red-Nosed Reindeer. A new cast will portray the beloved characters for the local theatrical debut of Rudolph the Red-Nosed Reindeer the Musical. Starting at 7 p.m. Tuesday,, all of your favorite claymation characters will come to life at Heinz Hall. Directed by Jeff Frank and First Stage, the production will feature the songs you know and love from the film for a kid-friendly, musical evening.
(600 Penn Ave., Downtown; through Dec. 27; click here for showtimes and tickets)
— Lauralei Kraski, PM Editorial Intern

IN THEATERS: Believe it or not, there are other movies coming out this weekend, too, including the Tina Fey and Amy Poehler comedy “Sisters” and yet another “Alvin and the Chipmunks” sequel. But the biggest release of the year — if not the decade — is “The Force Awakens.” While some shows sold out weeks in advance, most local theaters are showing the epic on as many screens as possible, so you should still be able to find a ticket if you’re flexible on the showtime.

Wear your best Viking costume and head to Seven Springs Mountain Resort Saturday, where you can party to summon Ullr, the Norse God of Snow. (No, I’m not kidding). Click here for all the info. — S.C.

This article appears in the December 2015 issue of PMWeekend.
Categories: Things To Do