Plus, stop and smell the roses - and wine - at Phipps. 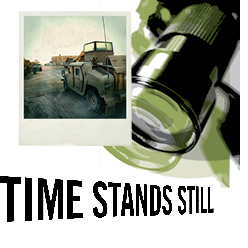 Two Can’t-Miss Plays Kick Off the Season
As actors return from summer stock, directors return from their quaint getaways and audiences return from outdoors, the theater season begins anew. Two of Pittsburgh’s top companies have put together headline-grabbing season openers to get you back in the theater. Time to grab tickets, call a babysitter and make some dinner reservations.

City Theatre kicks off its year with the towering Broadway hit Time Stands Still by Pulitzer Prize-winner Donald Margulies. The play, helmed by artistic director Tracy Brigden, concerns photojournalists in war and love, and has drawn uniform raves from New York critics. Meanwhile, underground powerhouse Off the Wall Theatre revives its 2007 hit Shaken and Stirred. Following this revival in Off the Wall’s Washington, Pa., home, the production will move off-Broadway for a one-week run.

After Dark: Pablo Francisco at the Improv–Still Time to Win Tickets!
Much to the dismay of vaudeville nostalgists, impression-based comedy is very firmly out of vogue in stand-up circles. Unless, of course, you’re going to see Pablo Francisco. Francisco, a still-rising star based in Arizona, revives the art of imitation by making his voice into an impressively broad toolbox. He can do sound effects, beatbox, ape musical styles and accurately conjure up the voice of just about any celebrity you can name. What’s more, he can usually do it all at the same time, constructing elaborate scenes incorporating all of those elements. Pablo will be at the Pittsburgh Improv this weekend and After Dark has your chance to win tickets! But enter now because time’s running out. Get the details in this week’s After Dark!

Stop and Smell the Roses—and Wine—at Phipps
Quick–don’t think about it too hard–what were you two favorite subjects in high school? If your answers were history and science, then get to Phipps Conservatory this weekend. Today marks the opening of the conservatory’s annual Fall Flower Show, and in addition to the natural wonders Phipps is known for, they’re taking a stroll down memory lane. In anticipation of the major renovation and expansion slated for next spring, rare documents and images from the archives will give visitors the chance to compare the current Conservatory to incarnations over the Oakland institution’s 118-year history. And while we’re talking about Phipps, grab your tickets now for “Wines Under Glass: Passage to India,” a can’t-miss fundraising soiree slated for next Friday, Oct. 21.

In Theaters This Weekend
New films coming to Pittsburgh this weekend include a pair of unlikely ‘80s remakes in Footloose, somewhat alarmingly made by MTV films; and The Thing, which is technically a prequel and not a remake of the John Carpenter classic, but close enough. Also, debuting this weekend are the bird-watching comedy A Big Year, with Steve Martin and Owen Wilson; and Nicholas Cage and Nicole Kidman in the home-invasion thriller Trespass. PM Film Editor Sean Collier will appear on the 102.5 WDVE Morning Show Friday morning to review The Thing and Trespass. Sean enjoyed Trespass and is going into his screening of The Thing the same way he approaches every horror remake: quietly praying that they didn’t screw it up too much. Tune in to 102.5 FM for Sean’s reviews!

More Events
Follow Alice and the White Rabbit down the Rabbit Hole and into Wonderland this Saturday at the Father Ryan Arts Center's third annual Art on the Rox event. All of your favorite characters from the famous Louis Carroll novel will be present, including a Mad Hatter photo booth. READ MORE.

It's time to honor man's best friend this Saturday at Grandview Park. Bring your favorite four-legged creature to the annual Grandview Park Bark and have them show off their skills in the agility course, or one of the many other activities taking place. READ MORE.