Only one local legend can survive. 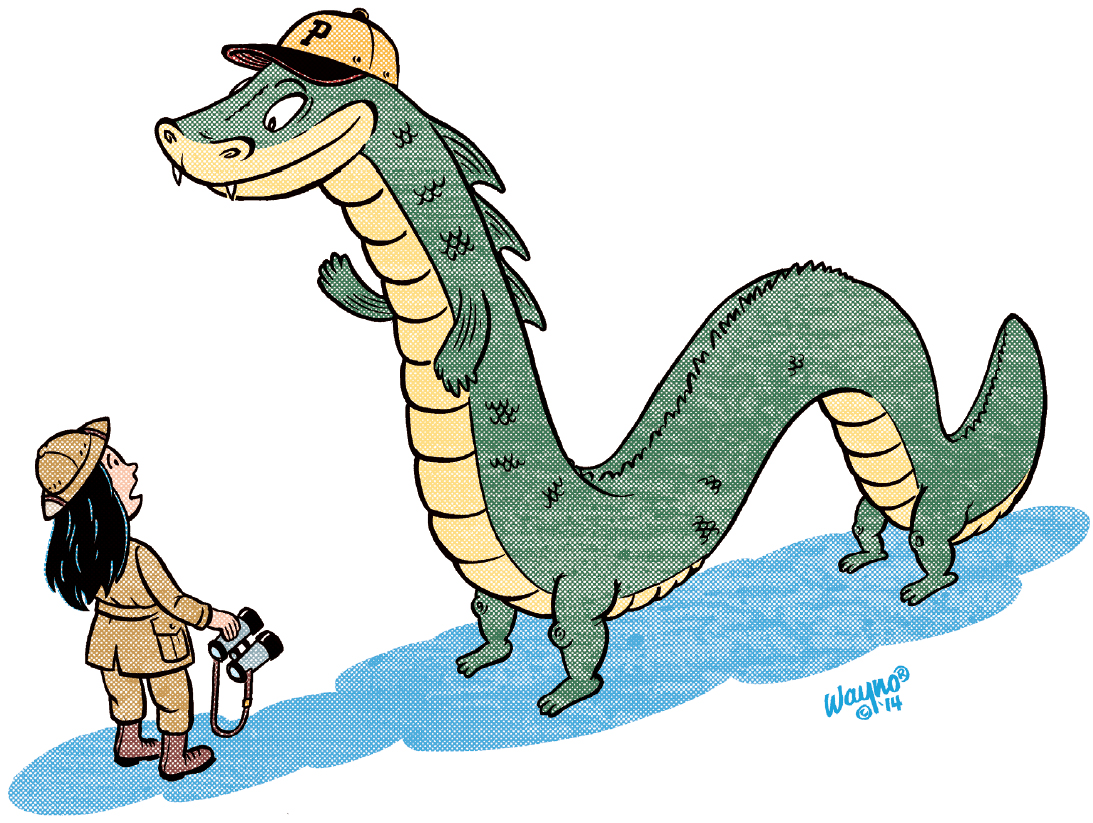 Fact: The Pittsburgh Tunnel Monster exists. There’s no other explanation for why Pittsburghers are filled with trepidation and an innate instinct to abuse their brakes at the sight of the car-eating, man-pulverizing tubes. I’ve long argued that we should mount “Here be dragons” signs at the mouths of these deadly beasts to warn out-of-state drivers that they’re about to enter the portal to final doom.

What about the other mythological Pittsburgh creature, the Monongahela Monster? What of the ancient whispered lore of a terrifying monstrosity living in the Allegheny, Ohio and Monongahela rivers? What of the tale as old as time of a creature lurking in the murky depths of our waterways, hungry . . . waiting . . . salivating . . . and probably putting fries on top of victims before swallowing them whole?

I’ve done the research, and it’s not comforting: Accounts of this behemoth date to the days before Europeans set their land-stealing toenails in the “new” world and continue right into the 21st century.

The Native Americans of present-day West Virginia and western Pennsylvania shared fireside stories of a river monster capable of cleaving a man in two with one snap of its powerful jaws. Swallowing children in a single gulp. Dragging deer down the riverbanks, where they are later drowned, crushed and ingested in minutes.

It may have a name: Ogua.

Which I believe is pronounced “Dear God Almighty, NO!”

The description varies from account to account, but I’m going to share what I’ve learned. Hold on to your Terrible Towels; it’s about to get interesting.

The Ogua may have been a 20-foot-long, 500-pound turtle-shaped creature capable of leaving the water on stout legs for short land excursions to attack deer and/or children. It could’ve been a monster that quietly lurked underwater near the banks of the rivers, awaiting a thirsty deer, which it would attack with its 15-foot-long tail, snag and drown. At which point — you guessed it — it would swallow the deer whole.

Other accounts refer to the water-dwelling Ogua as more “serpentine” in nature but with short legs that allowed it to move terribly fast on land, where it hunted prey . . . that it swallowed whole.

There’s one shady Internet report that states the creature had two heads. I’ve discounted that on account of a 20-foot deer-eating turtle sounding much more believable. Now, it’s possible that Native Americans invented the Ogua in an attempt to scare their young from getting too close to the river’s edge, where they could have fallen in. I mean, what’s more terrifying than being swallowed whole by a monster? NOTHING.

It’s also probable that the Monongahela Monster hasn’t a thing to do with western Pennsylvania and instead refers to the English ship “Monongahela,” which reportedly encountered, fought and bested a 100-foot sea serpent in 1852 off the island of Umnak in the Aleutians. That monster was 50 feet in diameter and had a 10-foot-long alligator-like head filled with about 100 3-inch-long curved teeth.

Perhaps we’ve mistakenly adopted this monster, thinking Monongahela referred to our river and not a ship a half-world away? Although it would be hard to confuse a 20-foot turtle with a 100-foot hybrid sea snake/alligator. That’s the weirdest sentence I’ve ever had published. Or maybe the Ogua was just a lost river alligator. That could explain the reports of people vanishing mysteriously from our riverbanks.

There is still so much to learn but, unfortunately, so little information. At this rate, I’ll never get my $64.99 Ph.D. in Cryptozoology from that totally legit Internet college. My thesis title: “Tunnel Monster vs. Ogua.” (Don’t steal that, SyFy. It’s mine.)

However, after eight hours of research into our city’s cryptid river monster using the scant information that is available, I’ve concluded the following: Ogua does exist, it’s terrifying and deadly — and it’s *spooky voice* a beast borne in HELL.

That — or it’s a really huge catfish.

Let’s find it, kill it and eat it with fries on top.

This article appears in the February 2014 issue of Pittsburgh Magazine.
Categories: From the Magazine, Hot Reads, PittGirl