PittGirl uncovers a shocking secret about her husband while on the Parkway. 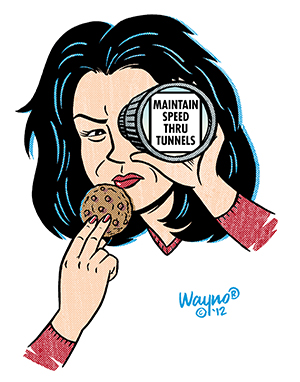 There comes a time in every married woman’s life when she takes a look at her husband with new eyes. Through a different filter. A lifted veil. She puts away the 50 mm lens and pulls out the 200 mm telephoto that wouldn’t make it past Heinz Field security on game day without a media pass. And she has to come to terms with what she’s seeing — something she noticed beneath the surface but never really put her head under the water to actually identify.

For me, that moment came in June, not long after our 12th anniversary. I lifted the veil, pulled out the zoom lens, plunged my head beneath the water’s surface and confronted the lurking monster.

My husband brakes for tunnels.

I appreciate your expressions of sympathy during my hour of darkness. He won’t admit it, which is unfortunately the first step toward recovery.

He can’t see it. When we’re in a tunnel, I point out that his speedometer has fallen to an exhilarating 40 miles per hour, whereas he had been easily going 70 prior to entering the tunnel.

He taps the speedometer and says, “Thing must be on the fritz.”

Now traveling slow enough to make out the individual tiles on the tunnel walls, I point out the line of cars behind us. He glances in the rear-view mirror and mutters about “tailgating jagoffs.”

Outside of a tunnel, he leans heavily toward tailgating slow drivers in the fast lane until I give him a scolding look. He’s no stranger to speeding tickets, and I have a sneaking suspicion that, when I’m not in the car, he drives like Dale Earnhardt, Jr. being chased down in the final lap at Talladega.

Yet inside a tunnel, he’s 98 years old, maneuvering an ancient Buick on a slow Sunday drive while muttering about “gosh darn daredevils.” I consider offering him a Werther’s and asking if he needs new tennis balls for his walker.

Then, in a flash, the light of day is cast upon the car, as we blast out of the tunnel now traveling at a mind-bending 35 miles per hour. And he is miraculously transformed. His right foot has gained 30 pounds and is forcing the accelerator down. His speed is quickly inching up until that “speed racing daredevil” who exited the tunnel a solid minute before us is now being treated to a closeup rear-view of our front bumper. At this point, my husband is saying things like, “If you’re going to go 55 miles per hour, get in the slow lane, abuelo.”

I open my mouth to once again try showing him what he isn’t seeing — that he is the tunnel monster.

But I shut my trap. There is no use. Like all tunnel-brakers, he can’t see it. And he won’t. He will not train the telephoto lens on himself.

Therein lies the problem, Pittsburgh: The tunnel-brakers aren’t scared of tunnels. They’re not claustrophobics. They don’t have tunnel-induced vertigo or solar-powered cars that power down when out of direct sunlight. They are simply blind to what’s in front of them (in this case, it’s their rapidly falling speedometers).

It doesn’t matter if PennDOT raises the tunnel roofs, widens the walls, enhances the lighting scheme or puts larger “Maintain Your Speed” signs with a few threatening exclamation points. My husband is solid proof that there’s no cure because these scourges upon Parkway traffic don’t realize they have a problem.

Our only way to cope is through acceptance, tolerance and possibly some local support groups for spouses of tunnel-brakers.

I’ll bring cookies, and you bring a couple boxes of good wine.  Red will do.

This article appears in the September 2012 issue of Pittsburgh Magazine.
Categories: From the Magazine, Hot Reads, PittGirl