Saturday Light Brigade, one of the nation’s longest-running radio shows, kicks off its third summer-concert series this month. 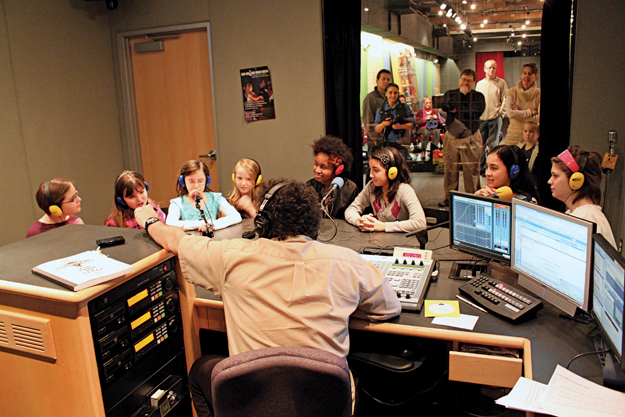 A group of young actresses from Gemini Theatre present a selection from their play, Charlotte’s Web.

It’s Saturday morning. Some Pittsburghers are still sleeping, but Larry Berger already spoke to a pair of brothers from Big Brothers Big Sisters of Greater Pittsburgh, introduced a budding mezzo-soprano and gathered background on a group of acoustic country musicians … all before lunch.

The six-hour program quietly begins at 6 a.m. with puzzles, weather reports, stories, music, the Saturday Stumper and call-ins from listeners. Berger is in the air studio chatting with callers on air. His wife, Rikki, the show’s executive producer, is next-door checking audience reactions.

During a recent show, in unrushed and casual mode, Berger interviews Nathaniel, an 11-year-old from Washington, Pa., and Joe Hareza, his Big Brother. Nathaniel loves math and football and has attended Steelers and Penguins games with his Big Brother; they discuss how Nathaniel pals around with Joe—even on some of his busiest days.

Berger then meets songbird Lydia Gibson from St. Vincent College. They discuss her hometown and her dreams of singing at The Met. Afterward, Berger introduces The Turpentiners, a band of acoustic musicians, and shortly after, the group’s twangy sound fills the studio.

SLB works off the air, too: Last year, the nonprofit guided eighth graders from Manchester Academic Charter School through a recording project. Students interviewed elderly North Side residents about their childhood. Moses Carper told two students that, as a kid, he earned $1 a day feeding horses on a farm located off of Perrysville Avenue. The collaboration produced Allegheny Voices, a 24-page publication complete with a CD. It also provided a rich experience for kids and seniors.

Berger draws out people’s stories with ease, like he’s been doing this most of his life. And in a way, he has: He created SLB when he was 16 years old and hosted it on WYEP-FM. After 25 years, he moved the show to WRCT-FM at Carnegie Mellon University. Berger also became affiliated with five other university stations, covering 15 Pennsylvania counties and parts of Ohio and West Virginia. 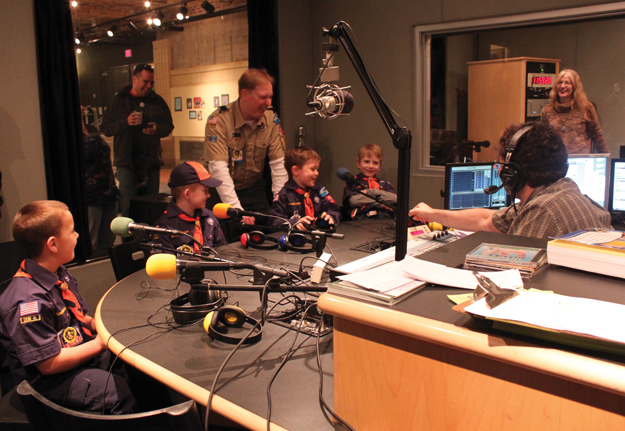 Throughout the years, SLB Radio Productions Inc. has grown into a corporation for kids, families, community organizations and schools. In 2004, SLB built a broadcast studio in the Children’s Museum of Pittsburgh.

The Saturday Light Brigade’s name grew out of a brainstorming session, says Berger. He wanted SLB to be a dynamic show that was “light-hearted” and full of ideas. One of the goals of the show was for it to provide “a sense of belonging as in a brigade.”

Berger believes that “belonging and a desire for respectful treatment is central to the human condition.” He also contends that “radio can be carried out in a way that fulfills these needs.” SLB’s world is “gentle, inclusive, trusting and approachable.”

Each Saturday, SLB invites the public into the studio to listen, watch performances and speak on the air from 10 a.m.-noon. Throughout the year, SLB conducts walk-up, in-studio radio workshops to introduce youths to radio broadcasting. The sessions promote verbal expression, listening skills and self-esteem.

Berger’s love of acoustic music doesn’t just permeate the SLB’s weekend show: During July and August, SLB participates in the Solar Concert Series outside every Wednesday at 12:15 p.m. Now in its third season, the performances are part of Pittsburgh’s first green concert series. Instruments are not plugged in. The sun powers the microphones and speakers.

The concerts take place in front of the Children’s Museum. Kids, teens, parents, students, seniors and businesspeople come to listen and grab lunch at the Children’s Museum Café and dine outdoors. Last year, Brad Yoder, a singer and songwriter, exchanged his guitar for a saxophone and started an impromptu “Name That Tune” game at a concert, prompting kids to shout “This Old Man” and “Pop Goes the Weasel” while identifying the songs. When Midge Crickett played cello, a fascinated 5-year-old got a chance to pluck and bow the strings. Musicians and the crowd had the opportunity to mingle after the concert.

“While musical genres at the concerts are varied and not mainstream,” says Berger, “you’ll almost always find children and adults dancing.”

To hear the show, TUNE IN TO:

This article appears in the July 2011 issue of Pittsburgh Magazine.
Categories: Arts & Entertainment, Things To Do