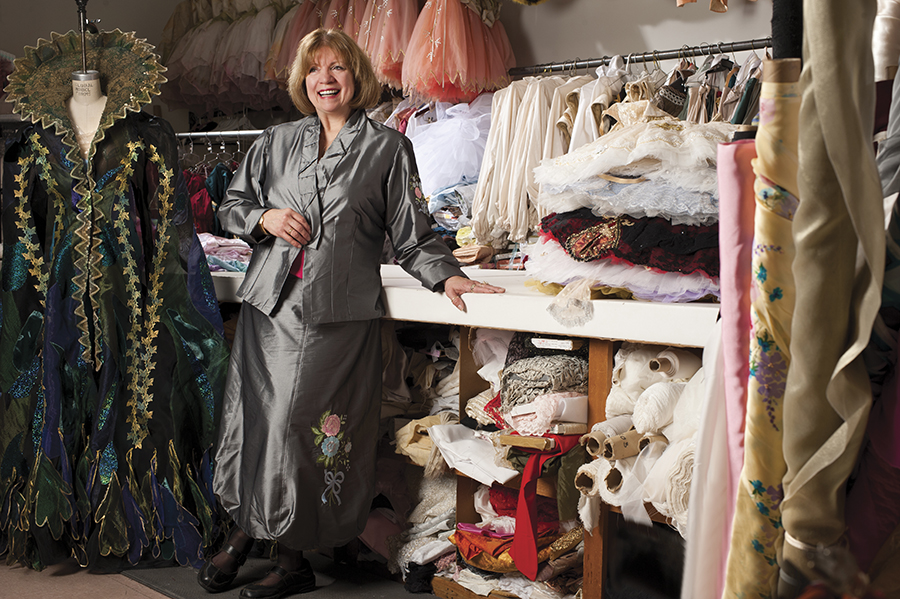 Inside a small back room at the Pittsburgh Ballet Theatre, Janet Groom Campbell is at it again. She’s sewing yet another costume for “Swan Lake,” this one an ivory tutu adorned with extra-shiny, diamond-cut Swarovski crystals.

“It’s the most sparkly swan costume I have ever made,” she says.

Coming from Campbell, that says a lot. The PBT costumier, who this season is observing 40 years with the company, has crafted more than 90 swan outfits — each one intricately constructed and decorated with feathers and sequins. But that doesn’t stop her from getting excited about making a glittering getup for principal dancer Christine Schwaner, who morphs into the Swan Queen in one of the most rigorous roles in ballet.

Campbell’s swan apparel is a small subset of the thousands of costumes she has whipped up from bolts of tulle, silk chiffon and Lycra inside the PBT’s Strip District headquarters. For all but the first four years of the company’s history, her creations have thrown a spotlight on the dancers’ arabesques, fouettés and leaps.

“Fabric has a mind of its own,” says Campbell. “You want the fabric to make what the dancer does look so much bigger.”

Her creations have wowed audiences for generations, but it’s likely that no one appreciates Campbell’s talents more than the artists she clothes.

“The costume is everything,” says Steven Annegarn, the PBT’s ballet master and former principal dancer. “You spend hours, weeks and years to get your body right. If it is covered by the costume, you lose everything. Janet works with us until it really fits. She is good about going back and getting it just right.” 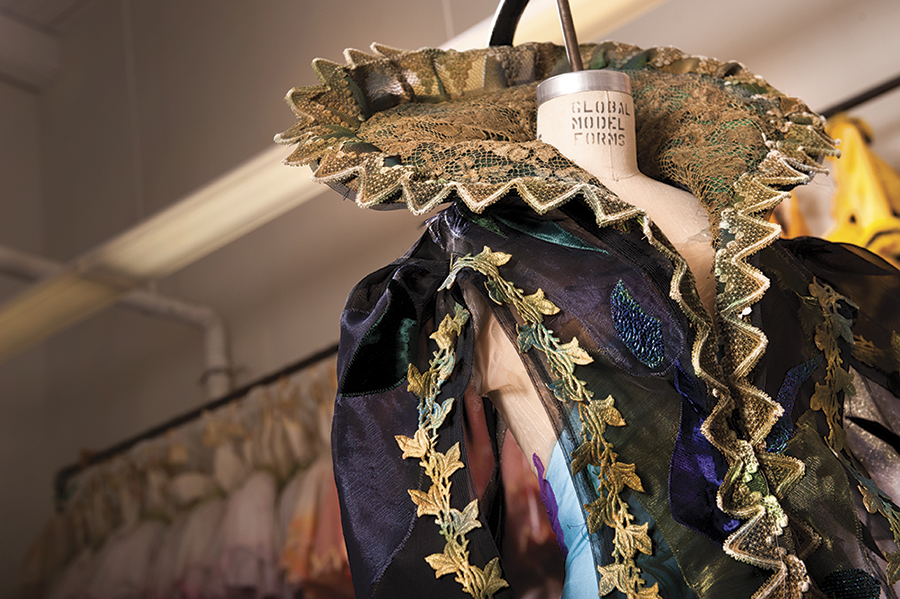 As costumier, Campbell has designed wardrobes for 27 ballets, including “The Mighty Casey,” “Corcovado,” “Lost and Found” and “Rodeo.” She and three seamstresses/stitchers working with her also bring to life the visions of other designers, including 50 costumes designed by Zack Brown for “The Nutcracker” in 2002. For that production, the PBT has 210 costumes — including duplicates of designs worn by snowflakes and other characters — of which 110 were built in the PBT Costume Shop.

Campbell constructed the title character’s wool gabardine suit to be impeccably tailored but flexible enough to allow vigorous leaps and turns. “We put Lycra facing on the sleeve so he could move his arms in every imaginable way,” she says.

Her job is not all sugar-plum-fairy sweetness. Consider the repairs she and her staff made this season to the rat costumes featured in the “The Nutcracker.”

“We replaced the rats’ bottoms,” she says in a conspiratorial whisper as a childlike grin spreads across her face. The faux fur and stretch-velvet jumpsuits, which were made years ago in a New York costume house, had holes where the tails poked through. The dancers’ acrobatic leaps further widened the rips — an indignity that dancing rodents should not endure. 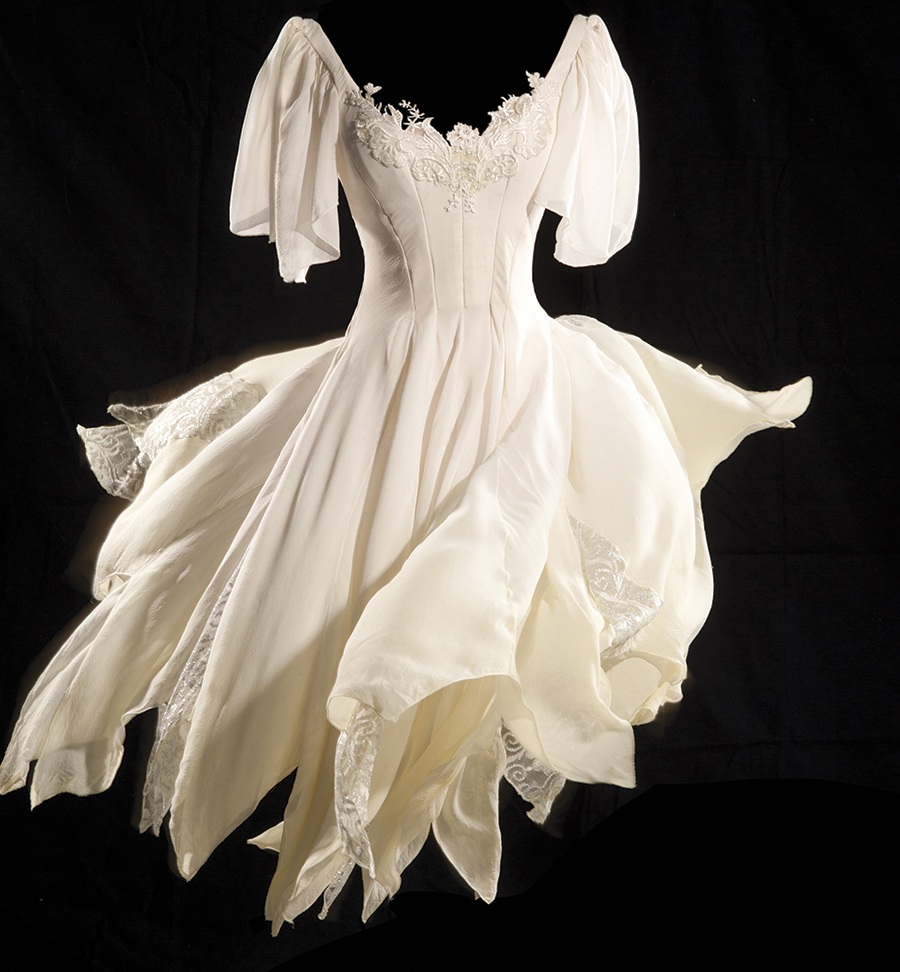 Daisy wore this dress in PBT’s 1987 production of “The Great Gatsby.”

Campbell and her team also conducted emergency surgery on the rats’ paws and light-up eyes. Last year, they replaced missing whiskers and fixed cracked teeth. “There is no rest,” she says with a laugh. “But if you take care of your costumes, they last forever.”

Artistic Director Terrence Orr says Campbell’s longevity with the company is a testament to her talent. “She has been around for 40 years, and that is a tribute in itself,” he says. “She understands how dancers work. Janet is great.”

Campbell, 60, always has loved to sew. As a little girl growing up in Coraopolis, she made elaborate dresses for her dolls and for herself. She studied fashion design at the Fashion Academy of Pittsburgh, where the receptionist, who also was an actress, told her the Pittsburgh Playhouse needed help with costumes.

A colleague soon recommended her to the PBT. At age 20, she arrived at the company’s headquarters on July 17, 1973, and she quickly moved up through the ranks. Within two weeks, she was named head stitcher. She became costume assistant within a year and company costumier by 1976.

Campbell is the only current PBT employee to have worked for company founder Loti Falk, whom she still writes to and visits in New York. “[Falk] was a dream come true for the company and the city,” she says. “We wouldn’t be here without her.” 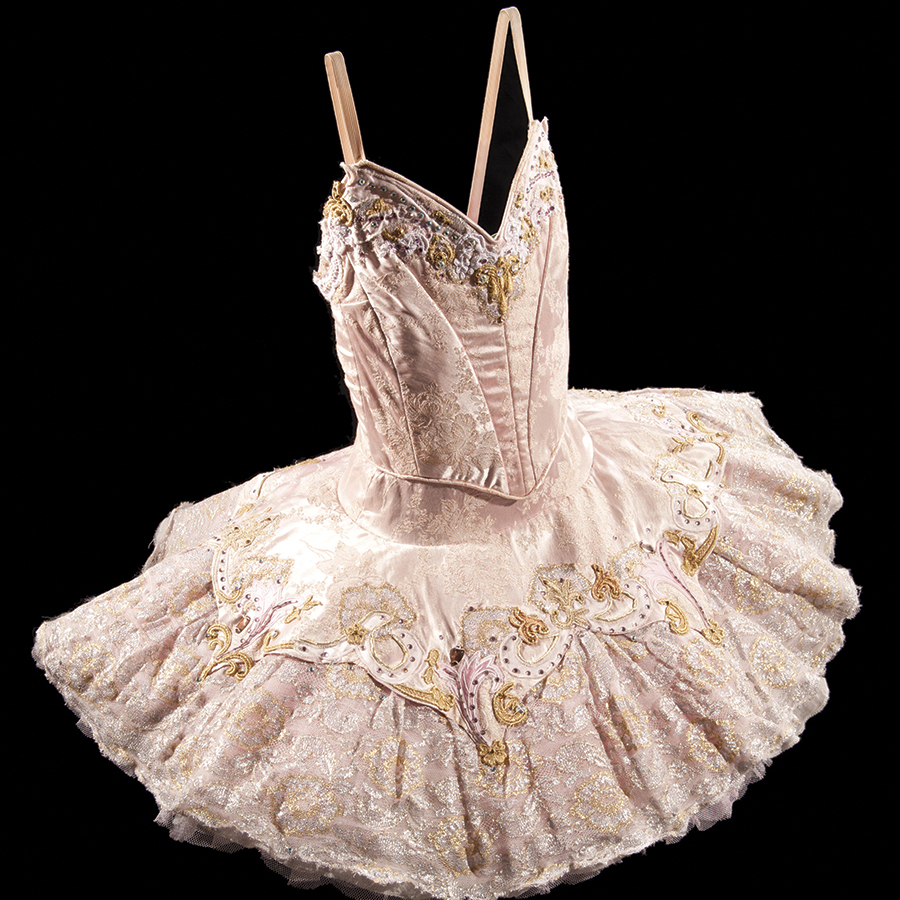 Campbell designed a classical tutu for the principal ballerina in George Balanchine’s “Theme and Variations,” which the PBT first performed in 1999.

When Campbell first arrived at PBT headquarters, she thought dancers would need loose costumes to provide room to jump and twirl. She quickly learned they move better in tight-fitting costumes that are not weighed down by fabric. She also knows that once a dancer sweats in a costume, it will feel looser.

Sometimes during a fitting, a ballerina will ask her to take out the garment.

“But look at yourself in the mirror,” Campbell will tell her. “You look drop-dead gorgeous.”

“The dancers love her,” says Katie DeCaria, costume assistant. “Sometimes the dancers are stressed. She is lovely and calming.”

It took Campbell two years to teach herself to make a tutu, an engineering feat that involves tacking down 10 to 12 layers of springy tulle so it collapses when the dancer leans into her partner.

“They are sort of magical,” she says. “That is why they are so hard to make.” She likens the process of flattening the voluminous garment so it can fit underneath her sewing machine needle to “wrestling a bear.” She also adds spiral steel bone casing to the bodice to support the fabric and allow the dancer to bend.

Campbell loves color and how it draws the viewers’ eyes to certain characters. During “The Nutcracker,” the audience instinctively watches Marie, who is wearing a light pink dress — the palest color on the stage. To create these effects, Campbell dyes fabric in a large vat — the same kind restaurants use to make soup.

Campbell is grace under pressure personified when something goes wrong. She and her staff are responsible for bringing costume accessories when the ballet goes on tour, counting and double-checking every crown and slipper. “You can’t buy a tiara at Kmart,” she says. 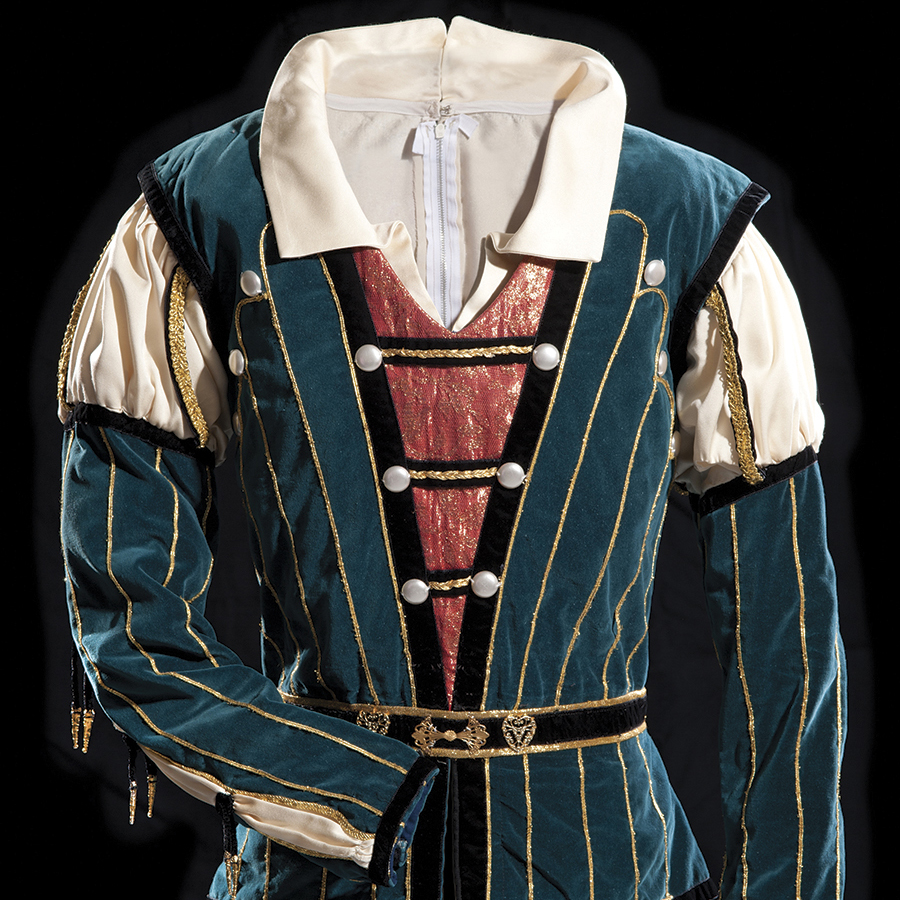 On one tour in the late ’70s, during a production of “Coppelia,” she forgot a hat for one of the soldiers. “Are you going to make it out of paper?” she recalls then-Artistic Director Patrick Frantz asking her.

“I don’t sew paper,” she replied. During her lunch hour, she rushed to a department store and bought fabric and notions to whip up a white hat with red trim and three silver buttons on the front. Frantz was thrilled.

In a 1975 production of “Romeo and Juliet,” she forgot the padding for Juliet’s portly nurse. “Everyone took their leg warmers and stuffed her,” says Campbell. Problem solved. 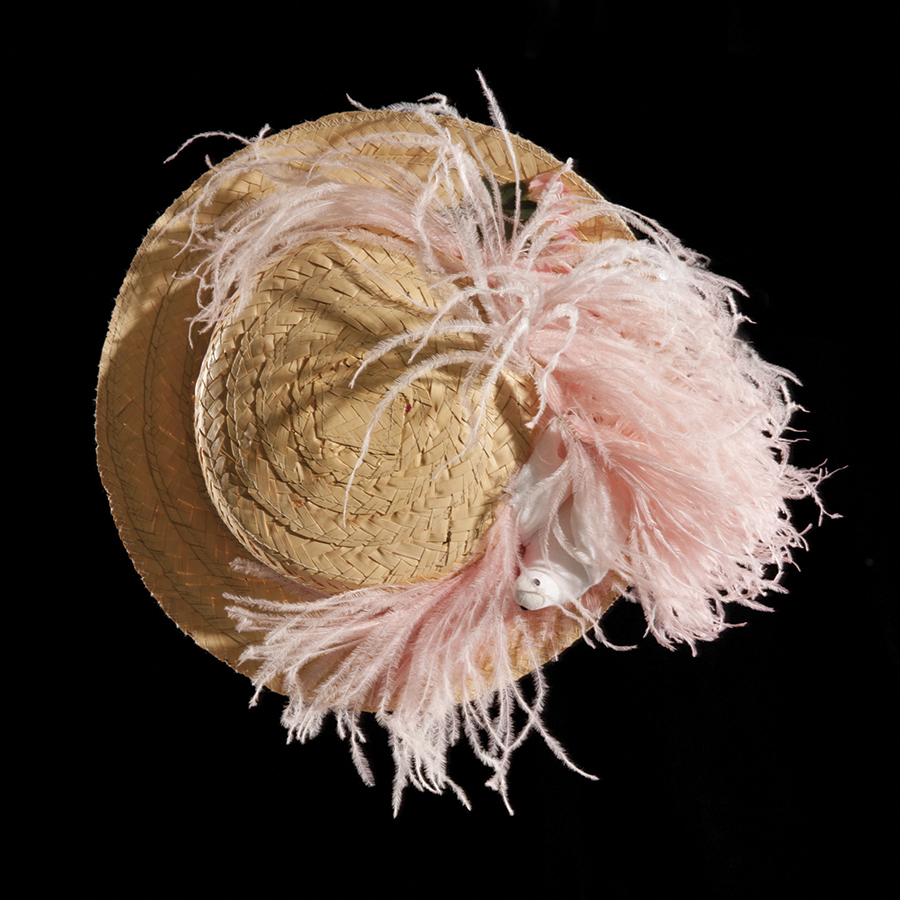 There also is the occasional wardrobe malfunction. During a late-’80s performance of “The Taming of the Shrew,” the dancer playing Bianca wore a silk pleated skirt. A male dancer swept her down on the ground, stepped on her skirt and ripped out the pleats. (“He had big feet,” Campbell recalls.) The ballerina ran off stage, crying. “I didn’t know whether to hug her or fix the skirt,” says Campbell. She opted for the latter, basting the garment frantically so its wearer could reappear on cue.

During the season, she alters costumes up until the 11th hour, taking notes during dress rehearsals and staying up half the night to make minor adjustments so that everything is just so for opening night.

“People don’t understand [that] it is extremely high-pressured,” she says. “You have to get it done. The show is on. When the curtain opens, everyone has to be dressed.”

This article appears in the April 2014 issue of Pittsburgh Magazine.
Categories: Arts & Entertainment, From the Magazine