“Trocking” Along: Living the Art-Filled Life in Pittsburgh

Patricia Sheahan’s home in the Brewhouse Art Lofts on the South side doubles as a gallery space showcasing her collection of art, antique finds and roadside treasures. 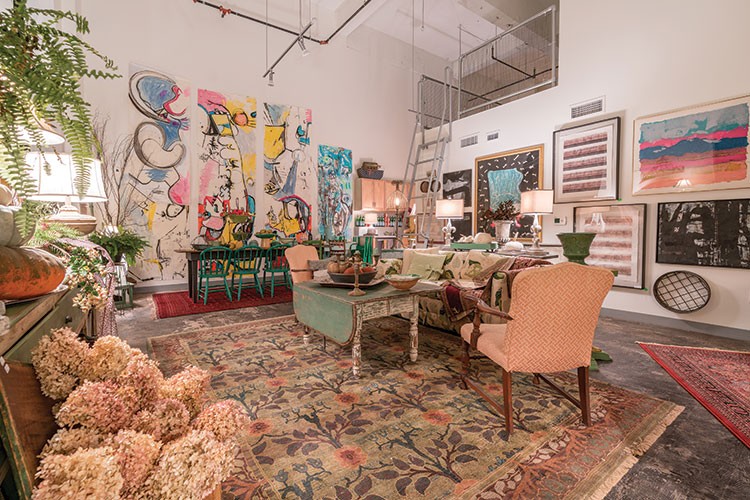 Patricia Sheahan is often on the hunt, at antique shops, estate sales, flea markets — even roadsides — in a quest for old furnishings and fixtures that she can repurpose into rustic hutches, art décor and household items.

“My challenge is that it has to fit inside a Mini Cooper,” she says with a laugh. “Otherwise, I have to rent a truck.”

Sheahan started collecting odd furniture pieces and antique throwaways about 50 years ago, when she and her husband, Jim Sheahan, moved to Pittsburgh. He was an adamant sports enthusiast — she doesn’t appreciate sports — so she found an activity of her own to do while he was engaged in his hobby. 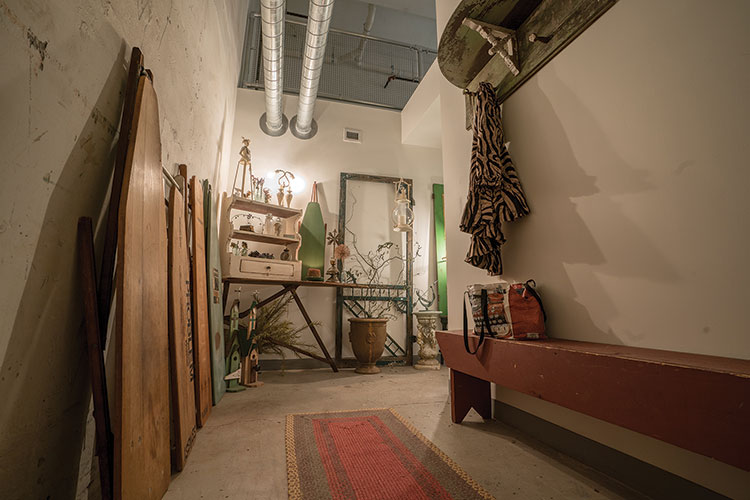 She resumed “trocking” — her term for antiquing — a pastime she enjoyed while living in Europe. “Every time I’m out and about, I look for the unusual, unique, eye-catching, story-riveting item to bring home,” she says.

Sheahan, 73, essentially lives in her own, ever-changing art installation. On an upper floor of the Brew House Art Lofts, natural light floods through tall windows overlooking a sea of rooftops and narrow streets; the high ceilings lend themselves to what Sheahan calls her “lofty ideas for living.”

The newly renovated Brew House Lofts building is located in the heart of the South Side and has its own distinctive history that dates back to the late 1800s, when it opened as a brewery under the Duquesne Brewing Co. There is an urban grittiness to living in the loft, which has a mix of affordable and market-rate apartments for the artist community and also includes a gallery and several studio spaces.

Sheahan happens to be a featured artist in the downstairs vitrion, where her installation, “Pop Des Tartes” sits in the large window display at the entrance. The installation features the re-use of materials as a metaphor for the years Sheahan spent as a self-described “Army brat.” 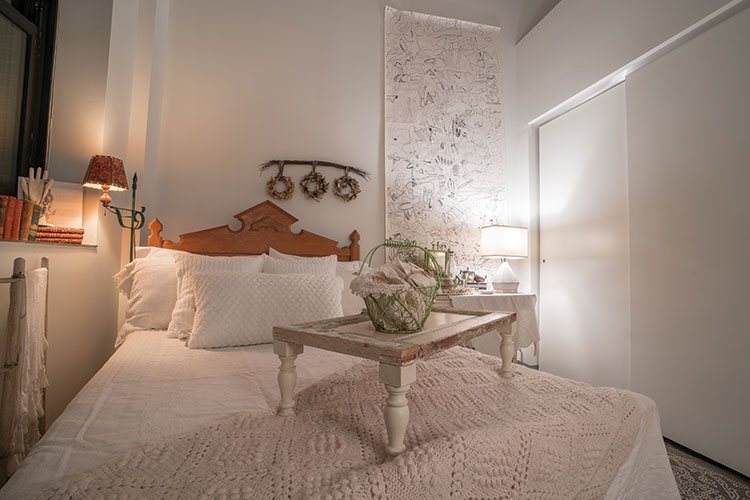 From Army Brat to Artist

Sheahan says her family moved often while her father served in the Army, living in everything from military barracks to a castle to a tiny two-bedroom apartment. Sheahan says she attended more than 30 schools — including one in a quonset hut — and went to classes in Frankfurt and Heddesheim, Germany, as well as a boarding school in Poitiers, France, because there was no high school near the area where her father was stationed.

Sheahan, who speaks German and French, says her mother and siblings only stopped moving when her dad received his final set of orders that took him to Korea. It was the only place they could not accompany him. 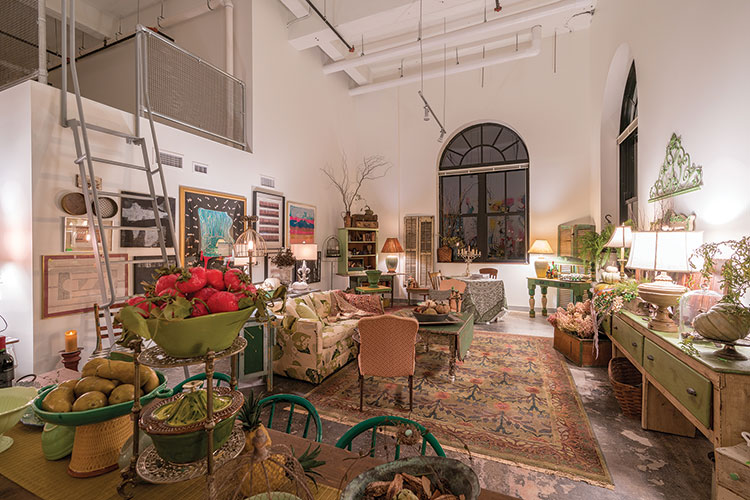 “I think that’s where I probably started looking at antiques and furniture with a different lens, because of what I was introduced to in my travels,” she says.
Sheahan collects and repurposes antique ironing boards that, while contributing to the décor, also make amazing tables. As an added bonus, they don’t cost much. One of Sheahan’s favorites, located in the living room, cost $25.

Several more line the wall in the foyer, greeting visitors in a succession of colors and patterns. The ironing boards were a past exhibition in the Three Rivers Art Festival, titled “Pressing Problems.” Sheahan says during the 24 years she spent as a school principal, she always kept ironing boards in her office. “My students would always say, ‘Dr. Sheahan, why do you have all of these ironing boards in your office?’ I would reply, ‘They’re for pressing problems, what’s yours?’” she says. 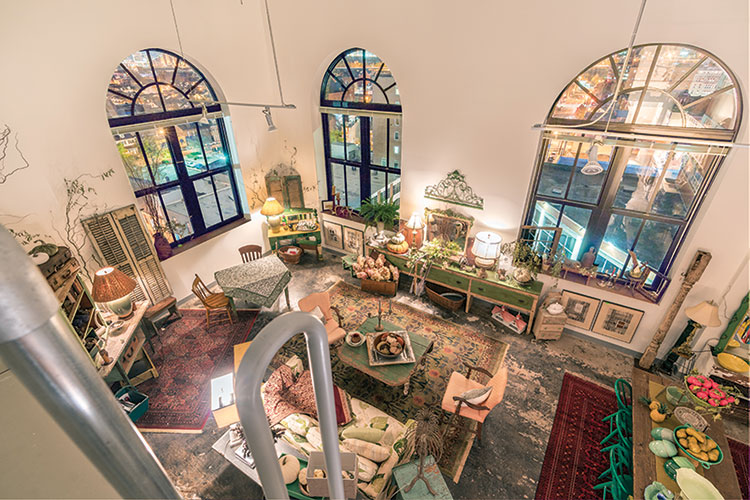 Now an adjunct professor at Duquesne University, where she teaches social justice through the arts, Sheahan says the eclectic pieces that fill her loft each have special meaning to her. There’s a black-and-yellow art piece gifted from Adrienne Heinrich, and a painting with floating fish by Mary Culbertson-Stark from her Carmel-by-the-Sea series. Artwork by Sarah Zeffiro, a young Pittsburgh artist who paints long panel papers, also contributes to Sheahan’s decor. Sheahan visited Zeffiro’s studio and says she fell in love with her brilliant panel papers. She asked to rent them while living in the loft and Zeffiro agreed.

In addition to artists, Sheahan is friendly with local antique shop owners and decorators. Becky Smith, who once owned the Wooden Bobbin in Ligonier, has helped Sheahan get items to her loft, such as a 12-foot library table that came out of a building at St. Vincent College and was going to be thrown away. Smith repainted the solid, dark-brown wood using Sheahan’s favorite blend of green and off-white hues. Sheahan also works closely with S&J Decorative Finishes co-owners Jeannie Oberdorf of Greensburg and Sharon Mitolo of Plum. They hand paint items that Sheahan finds, including — in a corner of the grand room — a screen Sheahan purchased for $40. She didn’t like the color and called on Oberdorf and Mitolo to paint it a brilliant, antique green patina.

“They are so talented in their artful endeavors,” she says. 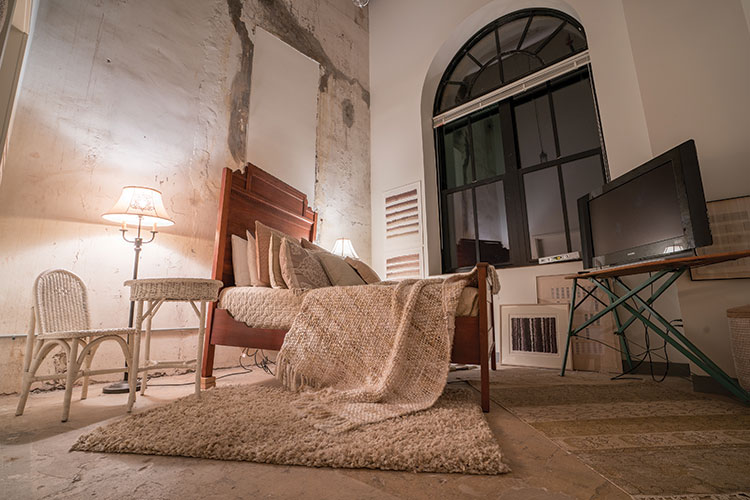 They also painted a chair, one of Sheahan’s roadside finds, into a checkerboard piece of art. Sheahan is nostalgic for checkerboard, a pattern that graces several of her pieces, including an ironing board. When she was growing up in Europe, she says many of the taxi cabs in Paris and Germany had that checkerboard effect.

“I’ve carried it with me all throughout my life,” she says.

Sheahan also has a sweet spot for chairs. Some hang on the walls, which in Sheahan’s opinion, is an excellent way to add architectural elements to a room.

Her one-of-a-kind pieces come and go rapidly. Price tags hang from items to be sold and rotated out for other treasures. Sheahan has a salon once a month, inviting people to browse her loft. She also has a small space in Leechburg called Market Street Antiques that allows her to trade out items from her loft and rotate new pieces in.
“It always looks different,” she says. “It’s constantly changing, depending on what gets sold, what I want to exhibit. It’s truly a living, rotating exhibition.”

This article appears in the January 2019 issue of Home & Garden.
Categories: HOME + Design