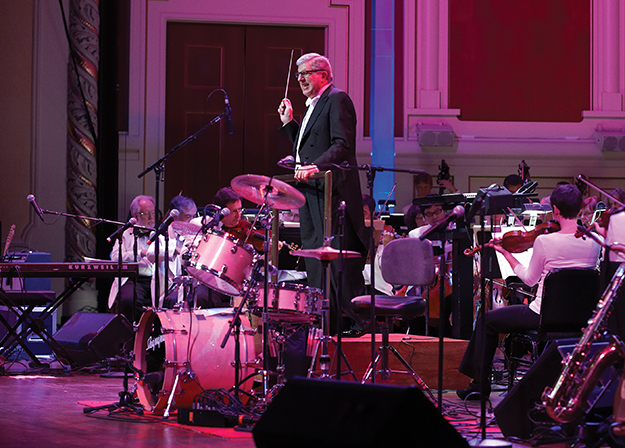 Marvin Hamlisch’s fanfare into pop-music culture was “Sunshine, Lollypops and Rainbows” in 1963, and at the time of his death this past August, he had just finished a film project, Liberace, as well as work on the musical production of The Nutty Professor.

In the interim, during a distinguished career spanning almost 50 years, Hamlisch made musical history, scoring more than 40 movies (among other musical feats) and earning Oscars, Golden Globes, Emmys, Grammys and a Tony. One singular sensation, Hamlisch even received a Pulitzer Prize for A Chorus Line. Who can forget this entertainer’s resurrecting Scott Joplin for The Sting or for enriching the pop-music canon with “The Way We Were.”

During his tenure, Hamlisch helped to raise the stature of the Pops, locally and nationally, not to mention its ticket revenues and attendance figures. His success didn’t go unnoticed elsewhere: He went on to replicate his Pops role in orchestras from Dallas to Seattle.

In a 1999 interview he did with me for PM, he declared his affection for Pittsburgh audiences over lunch at a downtown restaurant, noting, “New York and Chicago audiences give me the jitters.”

Hamlisch exuded what might be described as a Type A personality. And this was before iPhones. He was quick yet personable, confident without being cocky, polite while answering questions he had probably been asked countless times — and even inquisitive, also asking questions. He never revealed, though, any of the inner depth or melancholy sweetness that must have inspired music as hauntingly beautiful as his score for Sophie’s Choice.

Not only did Hamlisch connect to the audiences he loved here, but also to Pittsburghers themselves: During our interview, two young women were abuzz that a superstar was nearby. When he detected them on his radar, he motioned them over, greeted them and insisted they have a picture snapped with him.

Marvin Hamlisch died at the age of 68 on Aug. 6, which was, coincidentally, the birthday of pop-art legend Andy Warhol. There’s also some irony in that because, at our interview, he said he was color-blind (reds and browns) — but not yellow. His favorite flower was yellow freesia.

Yellow flowers, with their touch of sunshine, symbolize joy and friendship. He gave both to Pittsburgh.

To learn more about the legacy of Marvin Hamlisch, visit marvinhamlisch.com.