Tres Rios Has Potential, But Hasn't Distinguished Itself Just Yet

The tacos-and-tequila bar and restaurant on the South Side doesn't do anything wrong, exactly, but has room to grow. 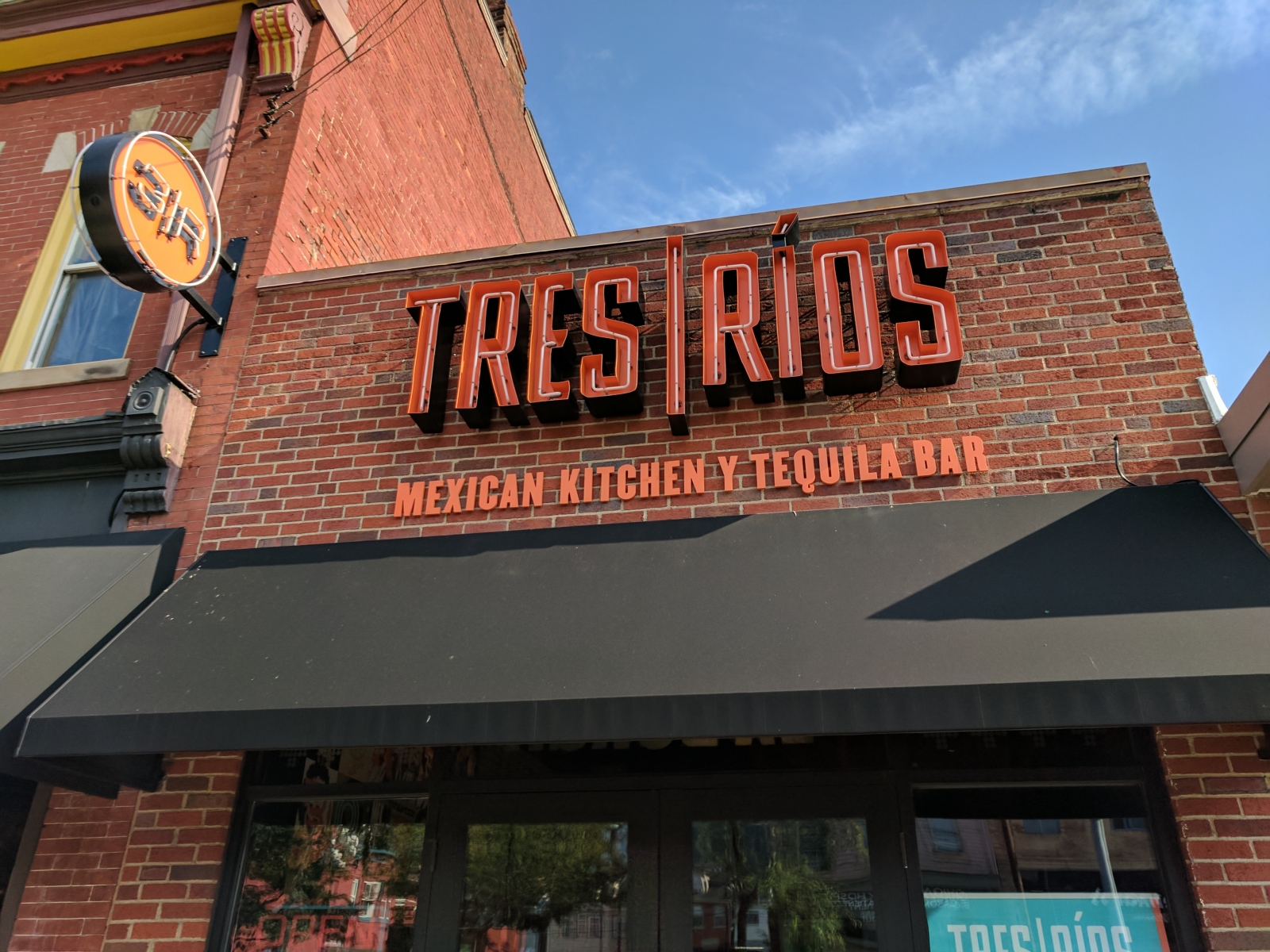 Getting into the taxonomy of cocktails is uncertain ground at best, but briefly: Not everything is a margarita.

This sort of indignity was visited upon the martini 15 years ago. A martini is a glass of cold gin with a preferably microscopic amount of vermouth; a bit after the turn of the century, that definition was popularly revised to “gin or vodka with stuff in it.” A technicolor dreamcoat of cocktails appeared on the menus of bars — usually the sort of bars with uncomfortable chairs — from coast to coast, all called “martinis” for no discernible reason.

Something similar is happening to the margarita at the moment. A margarita is a lot of tequila, a bit of triple sec and some lime juice. But at Mexican-themed bars and restaurants across the country, any cocktail with tequila and something citrus-y is forced to carry the margarita name.

I was considering all this while sipping the signature Elderflower Rosemary Margarita at Tres Rios, a new-ish bar and restaurant on Carson Street. There was definitely tequila in it; at moments, there seemed to be a hint of lime. But the elderflower taste was firmly in control of the proceedings, despite a splash of jalapeño syrup and the presence of some unidentifiable flora — it looked like pine needles, but it couldn’t have been (right?) — on the rim of the glass.

Let me be clear: It wasn’t a terrible drink. It wasn’t a particularly good drink, either, but it was serviceable. But it’s not a margarita. Nor are several of the other variations present on the Tres Rios menu, including the Winter Pear Margarita (which doesn’t even bother with lime juice).

I bring up this misclassification not to be pedantic — OK, not only to be pedantic — but because it’s a nice representation of the Tres Rios experience as a whole. Everything I’ve tried here, food and beverage alike, has been perfectly fine. Good enough drinks, decent food. (One dish, the empanadas appetizer, was actually quite good.) Yet there’s nothing particularly authentic about the place — authenticity being hard to find among the current crop of trendy-taco joints — and, like the unnecessarily complex beverage I drank, Tres Rios is just trying too hard.

Latin pop music seeps through the speakers at Tres Rios, while stylized, Warholian images of Frida Kahlo and mid-century luchadores adorn the walls. Is it a commodification of culture or pure-minded tribute? I’m not the one to make that call, and admittedly, nearly all similar restaurants embrace such iconography. (Points once again to Bakersfield for going with a more accurate western theme, by the way.) But it is definitely all a bit cloying.

The same goes for the menu; the cocktails riff on standard recipes like the margarita and paloma while Mexican beers and Spanish and Argentinian wines accompany the de rigeur microbrews. Dishes based on yucca, pato tacos and flavorful barbacoa add some variety to the offerings.

It’s good. It’s all good enough. I haven’t had anything here I didn’t like, and (while the rancheras on the soundtrack are occasionally a bit much) it’s a fine enough place to hang out on the South Side.

But, unless you are very badly craving a taco and a Tecate and happen to be within 50 yards of the front door, I’m not sure Tres Rios distinguishes itself from the pack in any meaningful way; while there’s nothing to hate about this place, I can’t think of anything to love, either.

I think they can figure it out and move forward; keep refining the dishes slightly, stop trying so damn hard with the atmosphere and focus on cocktails that are good, not just fancy. With some tweaks, Tres Rios could eventually ascend to a place among the better Carson Street haunts.

As long as they get the pine needles out of my drink.