The Arbor Day Foundation and the Toyota corporation awarded $500 to plant ginkgo trees behind the university’s U. Grant Miller Library. 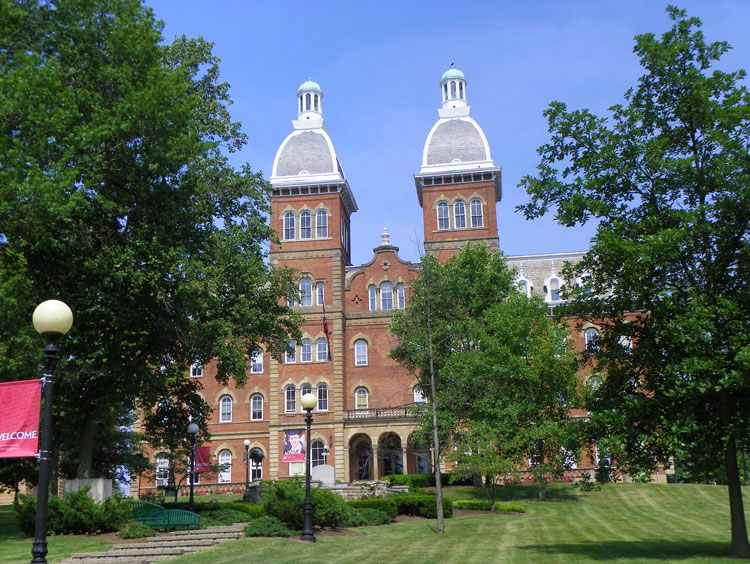 WASHINGTON & JEFFERSON GETS GREENER
As a result of being named one of the Tree Campus USA winners last year, Washington & Jefferson College received a grant to plant. The Arbor Day Foundation and the Toyota corporation awarded $500 to plant ginkgo trees behind the university’s U. Grant Miller Library. Students from Washington High School helped 25 W&J students from a botany class plant the trees this past Friday. For Jim Mirage, manager of the W&J Campus Arboretum, and biology professor Jason Kilgore, the ginkgo trees are a welcome addition to the campus. “One of the goals of the W&J Campus Arboretum is to diversify the trees on campus,” Kilgore, also the curator of the arboretum, said in a news release. “As gymnosperms, ginkgoes are medium-sized trees that have not changed much over the last 250 million years and produce characteristic fan-shaped leaves that drop in the winter. They will fit quite well next to the library and will be useful for teaching.”

SETON HILL CELEBRATES INAUGURATION OF 10TH PRESIDENT
Though Mary C. Finger began her tenure as Seton Hill University’s president in June, the school will celebrate her inauguration as its 10th president on Friday. Before becoming president of Seton Hill, Finger spent nine years as senior vice president for advancement at DePaul University, the largest Catholic university in the country, in her hometown of Chicago. Michele M. Ridge, chair of the school’s board of trustees, said that experience was key for Finger to excel as Seton Hill’s president. "Mary Finger’s professional and personal history shows a deep commitment to Catholic higher education,” Ridge said in a statement. “… Finger has demonstrated her commitmen t to the ideal that [Seton Hill], in the words of Elizabeth Ann Seton, ‘helps fit our students for the world in which they are destined to live.’” That commitment will materialize on Friday as Finger receives the presidential medallion from Sister Catherine Meinert, provincial superior and president of the Sisters of Charity of Seton Hill. Events planned for the week leading up to the inauguration include the planting of two trees on campus to honor Finger and the relationship she will help to develop with Greensburg. The ceremony is set to take place in the university’s Performing Arts Center in downtown Greensburg; it is open to the Seton Hill campus community or by invitation only.

BUSINESS AS USUAL: SUMMER WORKSHOPS RETURN TO EDINBORO
For the third consecutive summer, Edinboro University will bring high-school students from across the state and country to its campus for an in-depth, five-day look into the business field. Presented by the Edinboro School of Business, the Xavier and Tina Williams Summer Youth Business Academy offers workshops, field trips and social events on topic such as management, finance and college planning for students enrolled in grades 8-10. The program ends with the presentation of a student-created business plan that solves a common societal problem. Judges will select the best plan at the culminating awards ceremony, where each student receives a certification of achievement for completing the program. Each selected participant for the program will receive scholarships from the university to cover the $895 cost. The academy will run July 12-16, and students are required to stay in the residence halls on campus. Interested students can apply online.

FELLOWSHIP FOR CMU PROFESSOR
Carnegie Mellon University professor Alessandro Acquisti has been named to the inaugural class of the Andrew Carnegie Fellows by the Carnegie Corporation of New York. Acquisti, a professor of information technology and public policy at the Heinz College at CMU and co-director of CMU Center for Behavioral Decision Research, is one of 32 fellowship recipients. His fellowship — which could provide up to $200,000 in funding from the Carnegie Corporation for research — will examine the effect that greater access to data has on economic growth, equality and discrimination.

This article appears in the April 2015 issue of Great Minds.
Categories: Great Minds