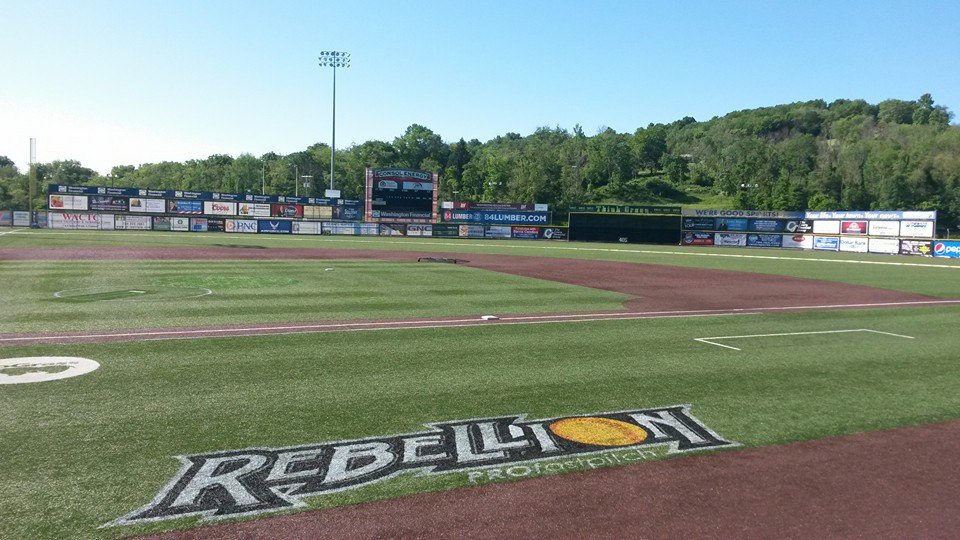 TOP-TIER SOFTBALL DEBUTS IN WASHINGTON, PA.
Boasting a roster of former Olympians and elite Division-1 talent, the Pennsylvania Rebellion women’s fastpitch softball team will take the field in front of a hometown crowd for the first time this weekend. The new team, one of four in National Pro Fastpitch (the only pro-level U.S. women’s softball league), will make its home at Consol Energy Park, also home to the Washington Wild Things.

Players to watch on the Rebellion roster include shortstop Jenn Salling, who represented Canada in the 2008 Olympic Games, and pitcher Sarah Pauly, a 10-year veteran with two Olympic trips under her belt. For fans of the game, it’s a rare opportunity to see the sport at its highest level; for sports lovers in general, it’s a great excuse to get out to beautiful Consol Energy Park. With tickets starting at $5, a Rebellion game makes for a fine family outing as well. The Rebellion will take on the Florida-based USSSA Pride tonight through Saturday at 7:05 p.m. and Sunday at 5:05 p.m.; for a full season schedule (fireworks night is July 25!), head to rebellionprosoftball.com.

INVESTIGATING PITT’S UNDERGRAD DESTINATION
Those of us who attended institutions other than the University of Pittsburgh have very few opinions about the collegiate bars on and around Forbes. We’ve popped in and out of one or two before, but we’ve never truly given a chance to any of the junior-and-senior year landmarks where generations of young Panthers have learned what drinks they prefer. This is a hole in our local bar knowledge that should be at least partially filled. What kind of a nightlife experts can we be if we’re omitting the stretch of Pittsburgh where the most drink-happy demographic gets the most drink-happy? Also, we were in the neighborhood, and Hemingway’s is open for lunch. See how this Oakland landmark stands up to the Bar Exam in this week’s edition of After Dark!

FREE CONCERTS AT THE FRICK COULDN’T BE MORE DIVERSE
No matter who’s playing, the First Fridays at The Frick series makes for an easy, lovely summer evening: Arrive early (starting at 5:30) to put together a picnic dinner with fare from The Cafe at the Frick, grab a spot on the lawn and enjoy a great performance for a $5 suggested donation. The fascinating feature this 20th anniversary season is the impressively wide range of music offered, as the series follows an indie-to-tamburitza-to-jazz trajectory. The series kicks off tomorrow night with a set by Meeting of Important People; the WYEP favorites will take the stage at 7 p.m. Later in the summer, look for acclaimed Croatian string music performer Jerry Grcevich and his Tamburitza Orchestra on Aug. 1 and the Sean Jones Quartet on Sept. 5.

IN THEATERS: The acclaimed bestseller “The Fault in Our Stars” gets all the headlines this weekend, as the big-screen adaptation starring Shailene Woodley and Laura Dern will drive legions of readers to the multiplex. Less buzzed-over is the Tom Cruise sci-fi epic “Edge of Tomorrow.” PM Film Editor Sean Collier will appear on the 102.5 WDVE Morning Show tomorrow at 7:15 a.m. to review “The Fault in Our Stars,” which was filmed here in Pittsburgh — though it’s set in Indianapolis, and there’s nary a bridge in sight. Tune in to 102.5-FM or DVE.com to hear Sean’s reviews!

This and every Sunday through Aug. 24, get up early and head to Market Square for a little weekend serenity. Yoga in the Square gets stretching at 10 a.m.

Grab a ticket for Saturday’s matchup between the Pirates and the Milwaukee Brewers and you’ll get to experience a postgame Fan Jam Concert by The Goo Goo Dolls. Tickets and info here.