Looking for the best spots to watch the 2016 U.S. Open? We have vantage points from every hole. 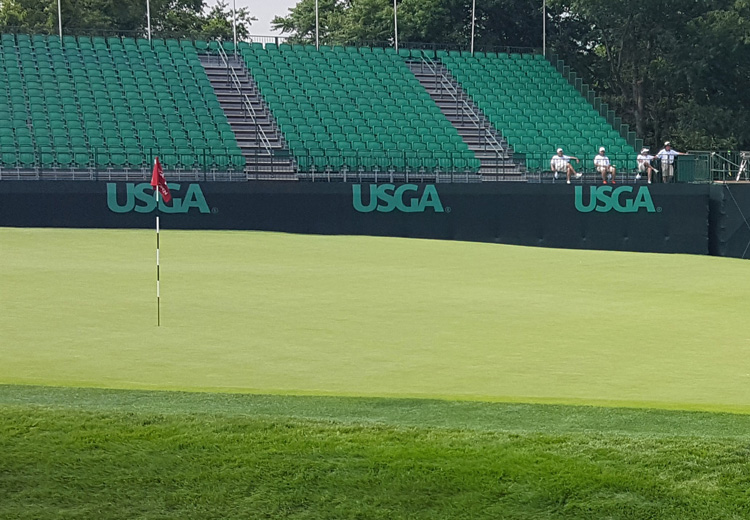 Golf-watching veterans know that the grandstands are always the marquee spot for viewing, especially when it comes down to that 72nd hole at the end of the championship round. Yet, how about for the fearless, foot-traveling fans?

Unless you’ve been here before, finding the best spots to watch your favorite golfer(s) can be difficult. Don’t worry about trying to cram into the grandstands, we have your best vantage points at the 116th USGA U.S. Open covered.

I recommend keeping an eye on the pairings and tee times of your favorite golfers because a few of these spots may be crowded come later rounds. My advice, get to the Open early and if you find a spot you’re happy with — stick with it and enjoy the show.

Hole No. 2
Where to watch: Corner of putting greens, left side facing grandstand
This particular spot opens up to views of both the greens at the second hole and the starting-tee at the third hole. For fans wanting to match multiple pairings this might very well be one of the best spots on the course. Despite being early holes, there’s not too many other locations where fans can be this close to both putting and driving action. A quick spin towards your left opens up a fantastic view of the fairway on No. 3. 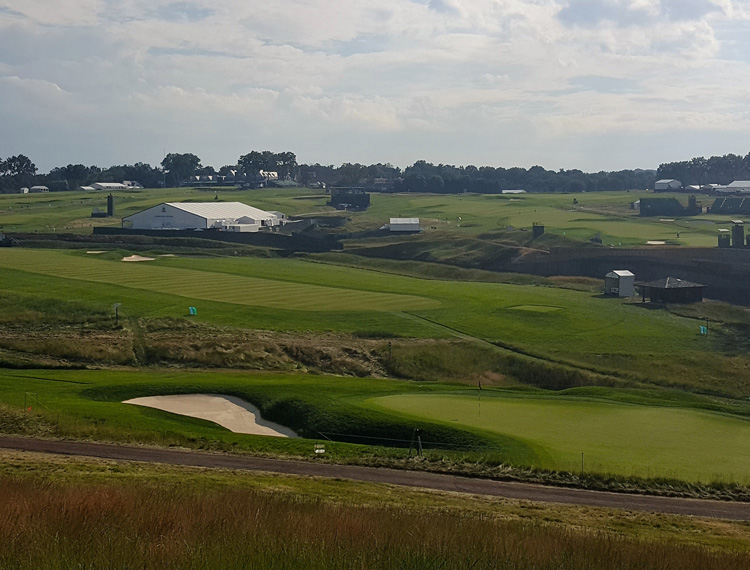 Hole Nos. 3, 4, 5, 6 and 7
Where to watch: Just behind the grandstand at No. 3 on footpath below the putting green
As you walk up towards the grandstand on the third hole, verve left behind it. There’s a little pathway just below the hole’s putting greens that gives spectators not just a breath-taking view of the opposite side of course but also views of four different holes in-play. Facing the green, nylon barricade fans will be able to watch players on the fairway on the 4th, the putting green on the 5th, the fairway at the 6th and the tee off on the 7th, This particular spot may not have you up-close to all the action, but the ability to watch four different pairings at once is intriguing. Not to mention, with just a few extra paces back up the foothill fans can catch players’ futile attempts at a birdie on the 3rd. 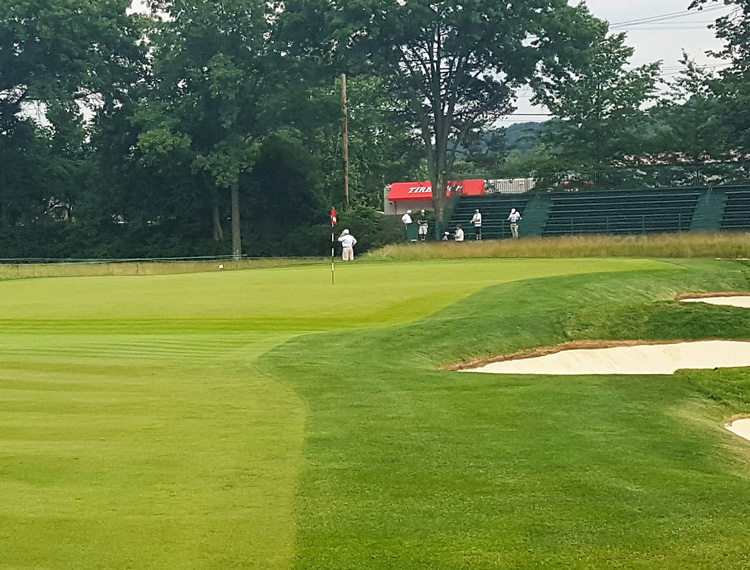 Hole number 8
Where to watch: Middle of fairways and putting greens on No. 8, left of the grandstand facing USGA scorecard
The fourth most difficult hole on the course according to the United States Golf Association (USGA). Why not take advantage of a vantage point that offers a look at each facet of action on this troublesome hole? Take the inside skywalk (third to the left on the course map), and, as soon as you cross over the Pennsylvania Turnpike, you’ll be facing the fairway the 8th. Concession stands will be to your left and the grandstands to your right. I recommend continuing straight ahead, where you’ll be able to watch the flight paths of players’ drives, watch their mid-game approach on the fairway and still have a terrific view of the putting green. It’s all-in-one vantage point for the last play of inward holes.

Hole No. 10
Where to watch: Corner of the 10th’s fairway near USGA leaderboard
You might have to trek through some rough to get to this spot, but it is worth the hike. The Champions Pavilion will be directly behind you and a USGA leaderboard will be to your right. The opening hole of the inward nine is a phenomenal spot to watch players’ tackle their mid-game trials and tribulations. The tenth hole may only be a par-4 and rated USGA’s 11th most-difficult hole on the course, but only 63 percent of players actually hit and land on the fairway of this hole due to its aggressive slopes. This allows fans a perfect venue to watch players dig themselves out of the rough and get a first-hand look at the rigor the contestants face while playing Oakmont. 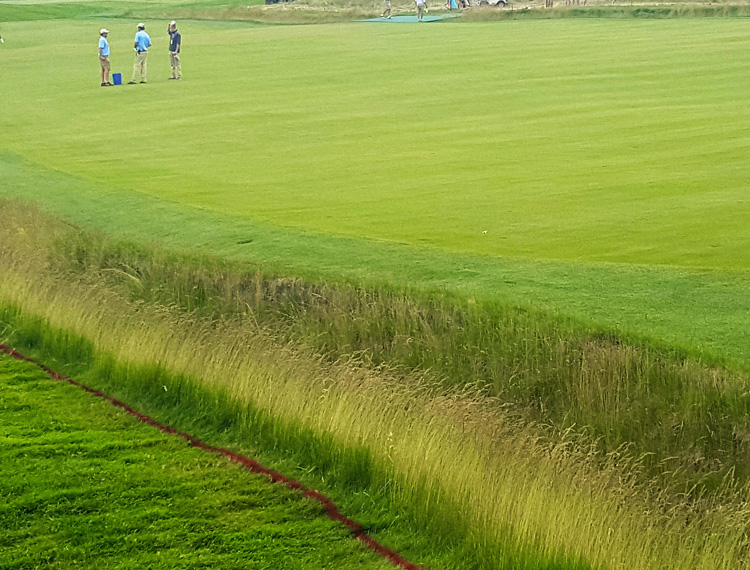 Hole No. 12
​Where to watch: Corner of the 12th in front of volunteer hospitality tent
On the opposite end of the Champions Pavilion is a first-aid station and the volunteer hospitality tent. Fans will notice a fantastic location just north (and a little bit towards the left) of the hospitality tent to watch players’ frantic strokes as they try and overcome the brutality of one of course’s two par-5s. Spectators will have a splendid view of both the fairway and a great sight of the hole’s putting green.

Hole No. 13
Where to watch: Directly behind the 13th’s starting tee
This is a bit of an odd one due to its untraditional view. Walk past the grandstands at No. 12 and stay left near the turnpike’s sound wall, then place yourself directly behind the starting tee at the 13th. It may be a bit of an abstract view, but it may also be some of the closest action fans can get to on foot. Spectators can nearly reach out and touch the starting tee green. The ability to watch players’ swing at such close proximity while having a perfect view of each drive’s flight path is priceless.
**NOTE on right side of No.13 fans can watch both the putting green and fairway by positioning themselves in front of the Palmer Suites** 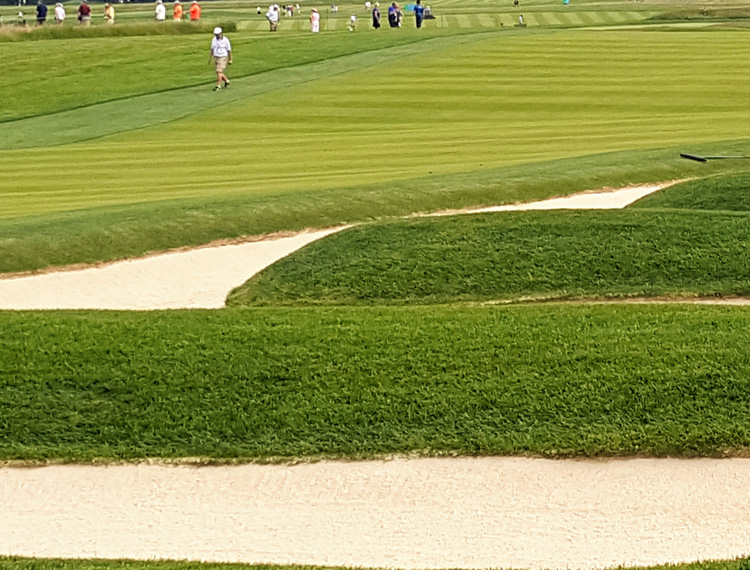 Hole No. 14
Where to watch: The sand bunkers at No. 14
This spot has two perks. One, it offers a captivating view of the course’s outward holes across the turnpike, and two, it grants one of the nicest views of hazard-play. Station yourself in front of one of the six massive sand bunkers near the left side of the fairway and watch as players try to outsmart the speedy slopes of No. 14 (a par-4). It may be rated by USGA as the course’s easiest hole, but as many of us know anything can happen at the U.S. Open — especially at Oakmont.

Hole No. 16 and 17
Where to watch: Right side of the grandstands at  No. 16
There’s a tiny little foothill sandwiched between the hole’s grandstands and the media tower at the 16th. Shimmy your way in there and you’ll have a terrific view of both fairway play and a clear shot of the putting green. In addition, a quick 180-degree turn will allow you a look at how players are handling the uphill challenge on the 17th.

Hole No. 17
Where to watch: Middle of Fownes Village at  No. 17
Make your way up the right-hand side of the 17th opposite of the grandstands. I recommend marching your way up to the crest of the hill; this reveals a captivating view of both the fairway (which 44 percent of players’ reach) and the right bunker, where 16 percent of players’ shots land while playing this hole. While this location is a great for watching mid-game play it also offers a solid vantage point of the putting green. 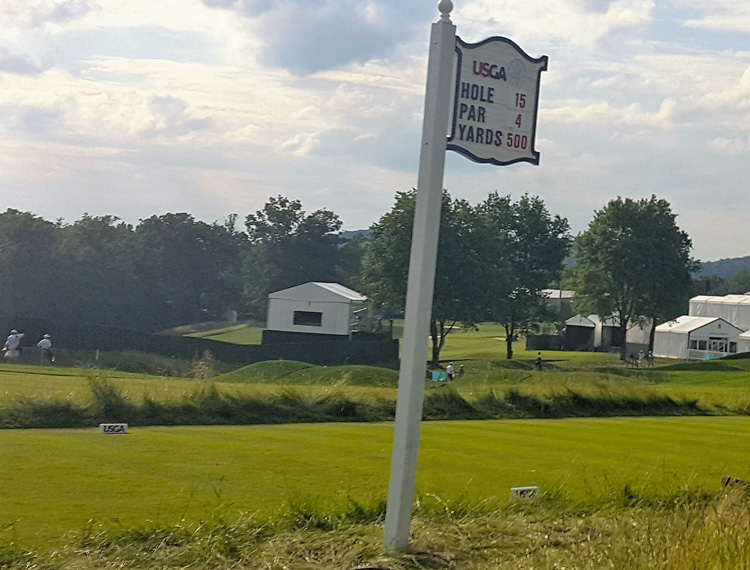 Holes No. 14, 15 and 18
Where to watch: Corner of the greens at  No. 18
This might be a little tricky to get to. Fans will have to maneuver past the hectic crowds near the clubhouse and two crossing-sections of course before finding a small inlet between hole Nos. 14, 15 and 18.  Each of the corners in this grassy island offer a unique view of the adjacent holes. The left side offers fans a look at the crowded putting green of Oakmont’s 18th, while the right corner opens up to a surprisingly great view of the greens at the 14th and the starting tee at the 15th (similar to the viewing style at hole Nos. 2 and 3). For fans who don’t want to spend the entirety of their day walking, this might be one of the best destinations for late-round action. But be wary of the lack of shade here and make sure to bring your sunblock.

Holes No. 1 and 9
Where to watch: Flagpole at No. 9
Tons of fans will line up on the opposite side of the 9th, but if you can wiggle your way next to the flagpole you’ll have one of the best views on the course. A grand vantage point directly in front of the clubhouse and the putting green on nine, an earshot away from tee-off at No. 1 and one of the best landscape views of the entire course. From here you can see Oakmont in all its scenic glory with views of the entire course save holes Nos. 16-18.