Planning a move? Here's where to look if you'd like to go out without getting any wheels involved in your journey. 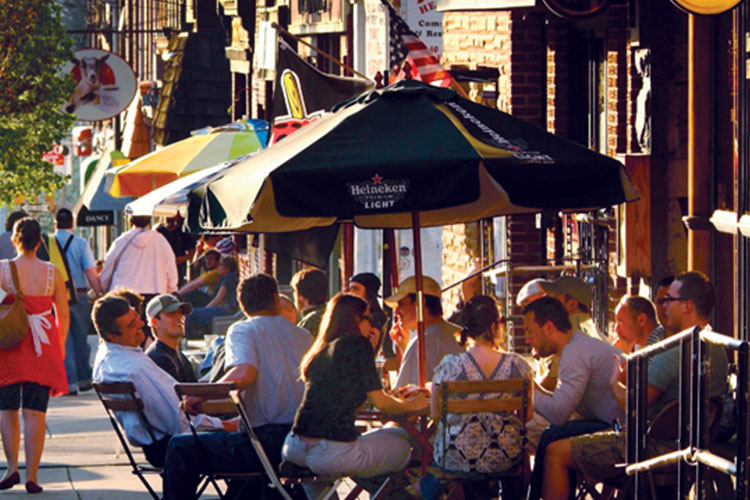 I spent most of my 20s hopping between neighborhoods. I took up residence in Squirrel Hill, Friendship, Edgewood, Wilkinsburg and Bethel Park (note to everyone: Bethel Park is very, very far from everything) before ending up in my current headquarters on Mount Washington. I’m growing quite fond of my mountaintop home, and I think I’ll stick around for a while — but I learned a few things in the midst of all that house-switching.

One: If you have doubts about whether or not the heat is going to work, the heat is not going to work. Two: The line between “it has old-school charm” and “most of these walls are in danger of imminent collapse” is razor-thin. And three: The ability to walk to bars and other nightlife destinations is paramount.

The biggest impediments to spontaneity in one’s evening are often logistical: “How are we getting there? Where do we park? Who’s going to play designated driver, or are we getting an Uber? When are we supposed to meet everyone? Is a bridge closed?” From there, it’s a slippery slope to “I’ve got a bottle of whiskey here, let’s order pizza and play Cards Against Humanity.”

But a neighborhood that allows you to walk easily and quickly to a variety of bars (and, ideally, some entertainment) removes all those blockades and encourages spur-of-the-moment outings. And if you’re fortunate enough to have relatively few other considerations when evaluating potential residences, choosing a place based on the stuff you can get to without the use of gasoline isn’t a bad way to evaluate.

Behold, then: My Top 5 Neighborhoods for Nightlife. (You’ll note my own Mount Washington is not included; there are things I can get to, but there’s too much untapped potential along Grandview and surrounding streets as of now.) Like your spot better? Email me and let me know why.

5) South Side Flats
I couldn’t not include Pittsburgh’s permanent nightlife magnet on the list; the South Side is still packed with bars, restaurants, theater, live music, events and much more. In 2016, though, the frequent response to that suggestion is a hearty “Yeah, but you have to live on the South Side.” Pick a spot a bit farther down towards the South Side Works complex and you’ll get a considerably quieter experience, add a movie theater to your walkable destinations and — vitally — always be within steps of a drink at Acacia.

4) Downtown
The idea that there’s plenty to do Downtown is relatively new — and the suggestion that anyone should make the choice to move there was once unheard of. As we’ve documented in the print edition of PM extensively over the past few years, however, the makeup of Downtown is changing dramatically. Find an apartment in the Golden Triangle and you’ll put yourself within a few blocks of destination bars and restaurants including Butcher and the Rye and Meat & Potatoes, nightly entertainment throughout the Cultural District (including more and more affordable options) and be right at home for massive events such as the Three Rivers Arts Festival.

3) Central Lawrenceville
Lawrenceville is probably the presumptive number-one destination for those looking for on-foot nightlife, and for good reason. Plenty of bars, plenty of food and — perhaps more than anywhere else — plenty to do at spots including (but by no means limited to) Hambone’s, Row House Cinema, Spirit, Belvedere’s and Cattivo. The only reason Lawrenceville isn’t higher on the list: Living here is quickly becoming prohibitively expensive. Pay the rent within a few blocks of Butler Street and you won’t have much cash left over to go out. If you can swing it, though, you’ll never want for stuff to do without a drive.

2) North Side
Do you know how much people agonize over getting to the North Shore? Hundreds of dollars for parking passes during Steelers games and concerts. Hour-long backups for major events. Schemes involving multiple “T” transfers, incline rides and Gateway Clipper voyages. Leave these people in the dust by putting yourself within walking distance of Heinz Field, PNC Park, Stage AE, Rivers Casino and many more (including cultural destinations such as The Andy Warhol Museum, the Mattress Factory and City of Asylum). Furthermore, as long as you don’t mind adding an extra 10 minutes or so to your stroll, you have all of Downtown available to you without ever setting tire inside a garage.

1) Bloomfield
If you’re in or near the heart of Bloomfield, you have a wider variety of destinations within walking distance than anyone in the city. Along Penn Avenue, favorite, long standing dives such as Armand’s and Bloomfield Bridge Tavern invite you to hang out for cheap, while a variety of grub, from burgers to Thai, will take care of dinner. There’s almost always music at Howler’s and frequent events at Pleasure Bar, Sonny’s and other spots. Perhaps most importantly, from here, you can easily hike to a number of other busy neighborhoods — Lawrenceville and Garfield quite easily, the Strip District and East Liberty with some time and even Downtown if you’re determined. Move to Bloomfield and buy a sturdy pair of sneakers and you’ll start seeing your weekly gas expenditure diminish; move to Bloomfield and buy a bike and you can pretty much sell your car.