Our list of the 10 best things to do in Pittsburgh this month. 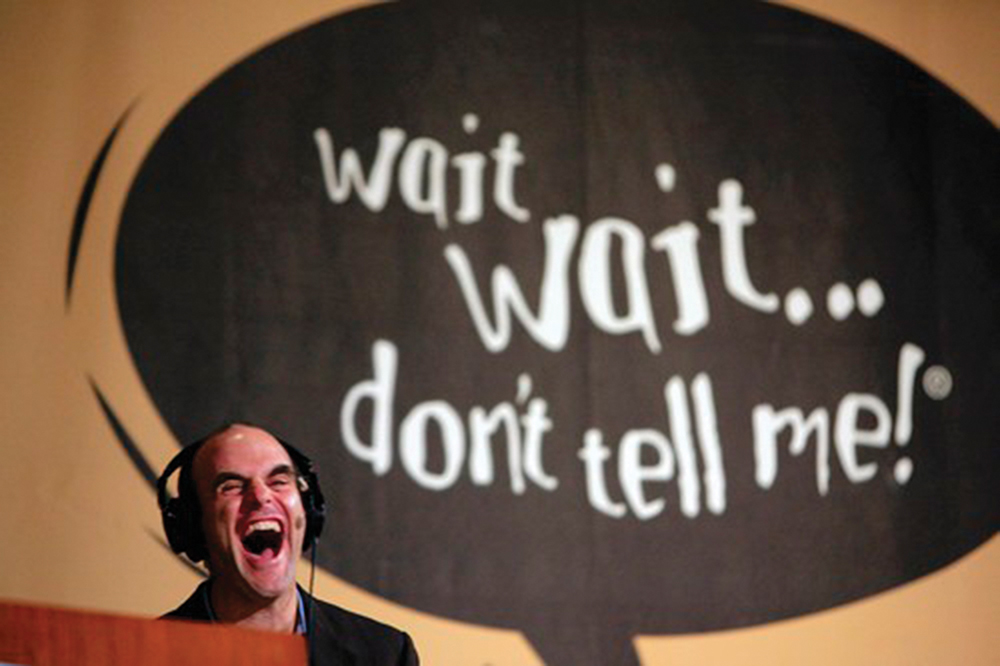 Video Made the Radio Stars
May 2
The best part of NPR’s “Wait, Wait … Don’t Tell Me” is that it sounds like a game show, but it’s really just a bunch of comedians riffing about the weekly news. Of course, most listeners haven’t had the chance to join the live studio audience at WBEZ-Chicago, so they’ve never seen Peter Segal and Carl Kasell in real life — until now. For one night, WBEZ will “beam” its video broadcast to various movie theaters across the country, including local Cinemark locations. Paula Poundstone and Mo Rocca will no longer be disembodied voices; you can watch their antics occurring in real time. And while you’re at it, see how many trivia questions you can answer correctly at the Robinson Township, Frazer Township or Monaca cinema.

Laugh It Up
May 4
The name says it all: Laughter is the Best Medicine. Want a second opinion? Then spend an evening with Post-Gazette cartoonist Rob Rogers, one of the most celebrated illustrators in the region. Glancing at his prescient panels in the op-ed pages, you might never guess that Rogers was trained as a classical artist. Today, he uses whip-smart humor and vivid drawings to explore issues and ideas in our ever-complicated world. Leave it to the Pittsburgh Psychoanalytic Center to take all this funny business seriously: Rogers’ presentation benefits the center and its range of mental-health programs.

Now Hear This
May 6
When a playwright pens a new script, thespians salivate with anticipation. For new works, one of the most exciting phases is the “staged reading,” where actors read a draft to an audience for the first time. The August Wilson Reading Round Table is a series of stripped-down performances that showcase rising (and risen) dramatists. This month’s edition is The Way to Summer, written by Nadine Bernard and directed by Tracey Turner. Find out what happens when a Jewish activist and a Zulu man try to fight apartheid in South Africa.

Sketchy Situation
May 11
The Pittsburgh Sketch Crawl is more than a casual stroll through the Cultural District. It’s more like a creative pentathlon — six hours of walking, discovering inspiration and jotting sketches onto paper. The leader of these intrepid artists is Rick Antolic, an illustrator who specializes in realism. Antolic will guide you through downtown’s scenic parks and plazas, and offer expert advice to improve your drawings. This all-ages event is designed for skilled draftsmen and amateurs alike.

Walk This Way
May 11
It’s the easiest thing you can do: Put one foot in front of the other — then repeat. But sometimes the mere act of walking can change lives. Tunch & Wolf’s Walk for the Homeless is a massive migration of caring individuals, whose registration fees benefit the Light of Life Rescue Mission. This easy little promenade along the North Shore is the brainchild of Tunch Ilkin and Craig Wolfley, veteran Steelers and beloved NFL broadcasters. As the economy teeters, homelessness remains a pressing concern — and no aid is more pleasant than a stroll along the river, followed by a bevy of free food.

Viva the Seattle Sound
May 12
At one point, Soundgarden was the face of grunge: Long hair, flannel and heads thrashing over their guitars. Almost two decades have passed since the band’s album Superunknown took over airwaves and record stores — and the members endured a bitter late-’90s breakup. But now they’re back, recording songs, making music videos and playing at Stage AE. You may never relive the days of mosh pits, but you can pick up King Animal, the first Soundgarden record released since the 2010 reunion.

Story Time
May 15-19
Why is the sky blue? From where do the seasons come? Why do the mosquitos buzz in people’s ears? In every corner of the globe, myths and folk tales attempt to explain the mysteries of everyday life. African Pourquoi Tales is a celebration of origin stories, taken from across the African diaspora. As part of the Pittsburgh International Children’s Festival, Pourquoi mixes traditional fables and music, thanks to master storyteller Charlotte Blake Alston. Hear age-old narratives from as far away as Africa and as nearby as the American South.

Rocking On
May 19
As ’80s music got louder and stranger, REO Speedwagon remained remarkably calm and sweet. Songs like “Keep on Loving You” and “Can’t Fight This Feeling” are endearing ballads about love and relationships, heavy on the harmonies and heartwarming piano. It’s only natural that Speedwagon would be listed on a springtime-concert bill with Styx (known for hits like “Come Sail Away”) and Ted Nugent (“Cat Scratch Fever”).

City Slickers
May 20
City Theatre will be wrapping up another successful season, which can mean only one thing: The opulent City Theatre Gala & Auction is upon us. Attendees include regular subscribers and donors, as well as the artists and staff who create the company’s extraordinary shows. Silent and live auctions will add suspense to the evening — bid well, and you may walk away with a coveted prize. This year’s rock ‘n’ roll themed gala takes place in the East Club Lounge of Heinz Field, which offers one of the finest views of the city.

Hard-Wear
May 31
In the spirit of creative recycling, the Hard Hats and High Heels Fashion Show, organized by Habitat Humanity of Greater Pittsburgh, takes a mountain of used material (textiles, rubbish and other found objects) and converts it into elegant outfits. Presented by Macy’s, this show combines catwalk couture (designed by Art Institute of Pittsburgh students) with sustainable thinking. Add food, cocktails and music at the DoubleTree by Hilton Downtown Pittsburgh, and this benefit for the Veterans Build home program may never go out of style.

This article appears in the May 2013 issue of Pittsburgh Magazine.
Categories: Things To Do