The 10 best things to do in Pittsburgh in October. 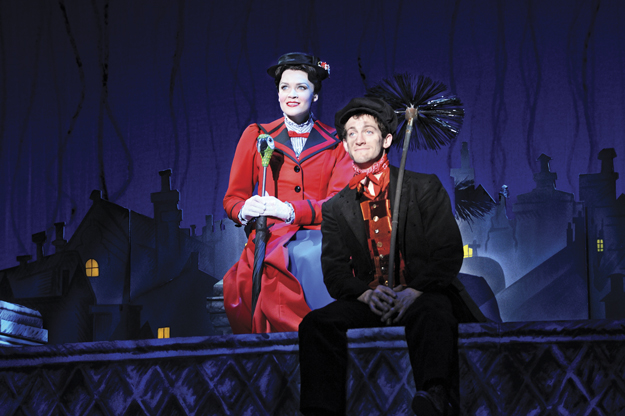 Supercalifragilisticexpialidocious!
Oct. 16-21
Mary Poppins has come a long way since P.L. Travers penned the original children’s book in 1934 — but whether you love the movie or the Broadway musical, a few things stay the same: Miss Poppins arrives with the wind, she carries a carpet bag, and everybody sings and dances — and learns important life lessons. This updated stage production includes a host of new songs, dance members and stagecraft — plus, a revised script by “Downton Abbey” creator Julian Fellowes and collaborator Cameron Mackintosh. With its enormous cast and breathtaking scenery, this touring Broadway show is one giant spoonful of sugar.

Samoan Splendor
Oct. 26
When you think about it, “Polynesia” conjures some romantic visions: swaying palm trees, flower leis and hula dancing. Steeler superstar Troy Polamalu invites guests to Polamalu’s Polynesian Luau, an opulent homage to Pacific food and culture. The luau promises a traditional island feast with Polynesian entertainment along with a live silent auction. It’s hard to say how authentic the occasion will be, but no matter: The event benefits the Harry Panos Fund of the Pittsburgh Foundation and the Troy Polamalu Football Camp. And forget that it’s October: For once, Hawaiian T-shirts are recommended.

The End is Nigh
Oct. 27
How do you celebrate 20 years of Halloween super-parties, especially when this one’s your last? The Evaline Halloween Party has become a national legend, partly because it takes place in an “ordinary” house outfitted with themed rooms, tents full of food and libations, and a full-fledged wooden rollercoaster (one of only a few privately owned in the country). In the past, party planners found inspiration in the board game Monopoly! as well as 2001: A Space Odyssey and other inventive works. This year’s theme is (what else?) “The End of Everything.” How will the Evalinians advance Armageddon? Get there early and beat the round-the-block lines to find out. Costumes are a must.

Lots of Art
Oct. 6-7
Mt. Lebanon is prettiest in the fall, and when the air turns crisp, it’s time for the annual Art in the Park. But this time, because the crafters’ bazaar takes place on pavement, it’s been temporarily titled “Art in the Park-ing Lot.” Vendors and collectors favor the market, partly because it provides a chance to stroll down Academy Avenue (aka Mt. Lebanon’s Rockwellian commercial center). Every variety of ceramics, jewelry, painting, sculpture, multimedia and fiber art is available. What’s more, the market, which benefits Mt. Lebanon Rotary projects, coincides with Plein Air Mt. Lebanon, a gathering of professional painters who roam the neighborhood to inspire their latest landscapes.

Some Enchanted Evening
Oct. 25-Jan. 20
“Maria.” “Shall We Dance?” “If I Loved You.” Together, Richard Rodgers and Oscar Hammerstein II created some of the most memorable songs in Broadway history. Several of those ballads come from canonical shows, like South Pacific and The King and I. Other musicals, like State Fair, are far less famous. “A Grand Night for Singing” collects 30-plus Rodgers and Hammerstein songs, which are conceived in a book by Walter Bobbie. Presented by the Pittsburgh CLO, “A Grand Night” revives the 1993 Broadway hit, nominated for two Tonys.

Super Natural
Oct. 12-13 & 19-20
What would happen if you combined the best parts of fall (leaves, cider, crisp air) and the best parts of Halloween (nocturnal walks, pumpkins)? You’d get Bump in the Night, a family-friendly evening in the woods. Instead of ghosts and ghouls or tricks and treats, families will find short night walks, sing-alongs and a meeting with a nocturnal animal. You can even carve your own jack-o’-lantern to take home. As the Frick Environmental Center’s naturalists will demonstrate, there are lots of bumps in the Pittsburgh night, but they’re nothing to be afraid of.

Off the Wall Theater
Oct. 12-27
There you are, a cutting-edge biophysicist at a major conference. You look up from your presentation notes to see a mysterious woman wearing a yellow bikini. Are you facing dementia, or does an even creepier twist await? Sharr White’s The Other Place is both a thriller and powerful drama about science, life purpose and the aging brain. Catch this riveting Pittsburgh premiere by newly relocated Off the Wall Theater.

Hop to It
Oct. 16
Craft-beer culture has taken Pittsburgh by storm (see our cover feature, starting on page 81, for evidence), so it’s no wonder that so many ’Burghers want to try fermenting their own. Most people start with kits and makeshift casks in their basements, but once they’ve muddled through a few recipes, they’re ready to consult some experts. Brewmaster Bill Moore of Lancaster Brewing heads up this month’s Craft Beer School, a one-night seminar on the art of beer making, thanks to the Pittsburgh Cultural Trust. Hosted by Tony “The Beer Man” Knipling, Moore’s tutorial will guide amateurs through the process of malting, milling and mashing the perfect frothy beverage. Nosh some hors d’oeuvres and sip some samples — this might be the most fluid learning process there is.

A Rich Bouquet
Oct. 20-21
In the entire botanical world, orchids are among our most beloved flowers — delicate, colorful and shaped like supernatural butterflies. The Fall Orchid Festival celebrates these wondrous plants with displays and a market — but you can do much more than take home a potted specimen: Thanks to the Orchid Society of Western Pennsylvania, you can also attend lectures on how to properly raise these wondrous plants. Learn from the experts how the species blooms and flourishes, and how to keep them alive through overcast Pittsburgh winters. Don’t have a green thumb? This two-day festival is designed for enthusiasts and amateurs alike.

One Love
Oct. 16
Mylan WTT Smash Hits is one of the quirkier events of 2012: It’s a tennis tournament — featuring Andre Agassi, Stefanie Graf, Andy Roddick and other Wimbledon legends — but the event is hosted by Sir Elton John and Billie Jean King. Weirder still, it takes place in the Petersen Events Center, which isn’t exactly a probable venue for racket courts. At first glance, you might wonder what “Mylan” is (well, it’s a pharmaceuticals company headquartered in Canonsburg). The occasion raises money for the Pittsburgh AIDS Task Force and the Elton John AIDS Foundation. Whether you’re a tennis fan or not, charities don’t get cooler than this.