Jackie Ormes was born in Pittsburgh in 1911. Her father was killed in a car crash in 1917, and when her mother remarried in 1918, Jackie moved to Monongahela, Pa., where her stepfather had a dairy farm. After graduating from Monongahela High in 1930, Jackie began working as a proofreader and occasional reporter for The Pittsburgh Courier, the nationally distributed African-American newspaper.  Her wit, cleverness and drawing skills eventually led to her creating several regular cartoons for the paper, starting in 1937.

Although she moved to Chicago in 1942 and did some work with another newspaper there, her longest running characters — including the brave and smart Torchy Brown, a sassy little girl named Patty-Jo and the always well-dressed Ginger — remained regulars in the Courier from the late 1930s through the mid-1950s. 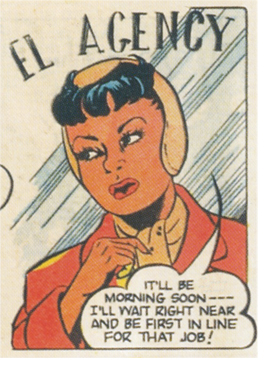 Ormes created a number of pinup-ready female characters — like this paper doll of Torchy Brown, which often appeared beside her weekly strip with various “Torchy Togs” to cut out and place on the doll.

These shapely women often shared many of Ormes’ own qualities: her hairstyle, sense of humor, eyes and commitment to making things better.

In addition to being in love with the dashing Dr. Hammond, Torchy was a crusader against industrial pollution and its effects on ordinary people, nearly a decade before Rachel Carson wrote Silent Spring.

Ormes’ cartooning career ended with the last single panel of “Patty-Jo & Ginger” in 1956, but she remained active in Chicago’s African-American community until she passed away in 1985. Her legacy is obvious at theormessociety.com, an organization dedicated to supporting black female comic creators and promoting the inclusion of black women in the industry.

Doll collectors also know Ormes because of the Patty-Jo doll modeled after her long-running, spunky character in the Courier. Prized by collectors, Patty-Jo dolls were produced from 1947 to 1949. They were some of the earliest African-American girl dolls, many with faces hand-painted by Ormes herself.

This article appears in the February 2012 issue of Pittsburgh Magazine.
Categories: Rick Sebak