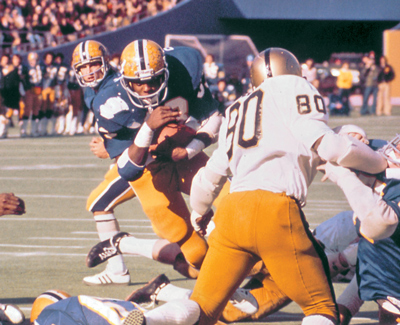 Photo courtesy of University of Pittsburgh

Full Name: Anthony Drew Dorsett Sr.
Date of Birth: April 7, 1954
Position: Running back
Years at University of Pittsburgh: 1973-1976
Career Highlights: Won the Heisman Trophy and led Pitt to the national championship as a senior in 1976 when he ran for 1,948 yards; four-time All-American who finished his career as college football’s all-time leading rusher (6,082 yards); named NFL Offensive Rookie of the Year in 1977 when he ran for 1,007 yards for the Super Bowl champion Dallas Cowboys; rushed for 12,739 yards and scored 91 touchdowns during his 12-year NFL career; four-time Pro Bowl selection; elected to the College Football Hall of Fame and Pro Football Hall of Fame.

One time when Tony Dorsett visited Three Rivers Stadium as a member of the Dallas Cowboys early in his career, the Steelers didn’t exactly offer him a warm reception, even though he was a hometown boy from nearby Hopewell in Beaver County. On one particular play, a Steelers’ defender—Dorsett no longer remembers who this was—roughed him up a bit after the play was over. At that point, Pittsburgh’s Mean Joe Greene barked to his teammates, “Leave him alone. He’s one of us. Do what you have to do to tackle him, and then leave him alone.” The moral of the story: Once a Pittsburgher, always a Pittsburgher.

Dorsett has made his home in Dallas ever since the Cowboys made him their first-round pick in the 1977 draft, but folks around here who saw him play at the University of Pittsburgh will always remember him as the electrifying running back who ushered in a terrific era of football for the Panthers. Pitt finished 1-10 in 1972, the year before Dorsett arrived on campus as one of coach Johnny Majors’ first recruits. Four years later, he captured college football’s most coveted honor, the Heisman Trophy, and the Panthers went 12-0 and were crowned national champions.
These days, the 54-year-old Dorsett resides in the Dallas suburb of Frisco, and he’s quite active in the business world. He has ownership in separate mortgage and investment firms, as well as in a company called Tony Dorsett Food Products, which produces pre-cooked foods for the military.

PM: Can you share your fondest memory of your days at Pitt?
T.D.: There was an awful lot of them, but my senior year—and I’ll never stop telling everybody this—was like a script for a Hollywood movie. You lose your starting quarterback [Robert Haygood] and your second-team quarterback [Matt Cavanaugh], and you’re down to a fifth-year guy who had never taken a snap before [Tom Yewcic]. After all we went through that year leading up to the Sugar Bowl, to go down there and beat Georgia to win the national championship was incredible. Being a part of that and seeing it come to fruition was an amazing thing.

PM: When you first got to Pitt, did you have any idea that something special was about to happen for you and the program?
T.D.: I had no idea. I really didn’t. I was hoping that something good would happen, but you never know. All I did was a little bit of due diligence on John Majors and his staff, and I knew they were changing programs around where they had been, so I was hoping the same thing would happen at the University of Pittsburgh. And fortunately for us, it did.

PM: Going into your final season at Pitt, were you confident you would win the Heisman Trophy?
T.D.: After three years at the University of Pittsburgh, I had outrushed two Heisman Trophy winners: [Penn State’s] John Cappelletti my freshman year and [Ohio State’s] Archie Griffin my junior year. Everyone said, ‘Archie was the first guy to go over 5,000 yards.’ So I made a bold statement and said, ‘You know what? I’m going to be the first guy to go over 6,000 yards.’ After that I thought, ‘Oh, man. I can’t believe I said that.’ Fortunately, I did make it happen. That year [Southern Cal’s] Ricky Bell was banging it out, but late in the season he got injured a little bit and that slowed him down. I was fortunate I was able to stay healthy and keep putting up the numbers. So I thought I was going to win it, but I wasn’t sure because of what had happened the year before.

This article appears in the July 2008 issue of Pittsburgh Magazine.