Tomlin Beats Belichick With a Smile

How Mike Tomlin dealt a blow to the surly Cult of Belichick. 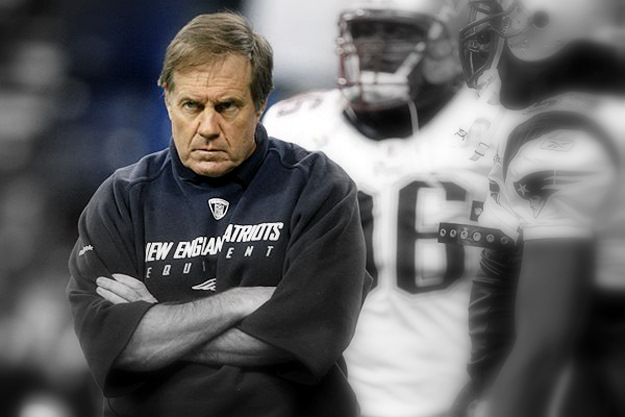 Something funny happened this past Sunday. The Cult of Belichick—that strange aura shielding the New England Patriots’ head coach from critical analysis, the unyielding devotion to a personality that would fit snuggly on a constipated corporate downsizer whose 6-year-old monochrome Blackberry just seized up—seemed to wilt in front of our eyes.

The defining moment occurred when a gaggle of assistant coaches approached the besieged Tom Brady on the sidelines with all manner of aerial photos and counter-strategy. Brady looked off into the distance and absently shook his head as they yammered at him.

In the midst of crisis, down by two scores on the road, Brady looked OMG SO ANNOYED, as the teenagers say on Facebook.

Perhaps Brady sensed that his sweatshirted sensei was in the midst of being outcoached by Mike Tomlin. Perhaps he had just heard enough negative reinforcement for one lifetime.

The unimpeachable NFL Narrative is inspired by Machiavelli’s eternal question, “Is it better to be loved or feared?” Thus, if you’re an NFL head coach, either you’re a charismatic buddy-cop motivator, or you’re the hermit-savant Bosnian warlord of your little practice facility sovereign state. Tomlin is the gold-standard for the former, Belichick the latter. There’s no room for in betweens or nuance in our national dialogue.

In the past, Tomlin played things too close to the vest against Belichick. This time, he followed his own poster-sized Tomlinisms. He dared to be great.

The strategy was daring, and remarkable: Tomlin effectively held out his veteran All-Pro, Hines Ward, in order to utilize the speed of young receivers Emanuel Sanders and Antonio Brown against New England’s flimsy secondary. But just when it looked like Tomlin was gearing up to go vertical with his speed-burners, which coincidentally would have exposed Roethlisberger to pressure, Tomlin flipped his gambit and played the short game instead. Roethlisberger shredded the Patriots with unpredictable, efficient, methodical drives that kept Brady brooding on the sidelines. Tomlin beat Belichick with his own devices.

For once, Tomlin deserves plaudits as a tactician and not just a master psychologist. Belichick thrives on anticipating an opposing coach’s tendencies—the mental tics they succumb to when under duress. He succeeds by being two steps ahead. So Tomlin turned around and walked the other way.

It was a huge leap of faith to trust in two second-year receivers in arguably the biggest game of the regular season, and a move that would have the potential to kindle a locker room rift if Tomlin didn’t have such masterful control over his players.

We saw it during last season’s improbable comeback against the Baltimore Ravens in the AFC Divisional Round. We saw it again after the team was eviscerated in Week 1 by those same Ravens. And we saw it once more this past Sunday. It’s more than a belief. There is a trust pervading the locker room that’s unmatched in the league, and it stems from Tomlin exhibiting one of the rarest coaching traits in the world: Positivity.

On NFL Network’s recent documentary, “A Football Life,” we got closer to Belichick’s impregnable mystique than ever before. We were given a rare peek behind the curtain, and what was happening in the Magical Mystery World of Micromanagement? A curmudgeonly, perpetually exasperated man telling everyone within earshot – assistant coaches, players, even his star quarterback – that his team sucked. We suck, he’d restate for emphasis.

You can just imagine every sadist junior college coach around the country chomping on Orville Redenbacher and nodding their head sympathetically as Belichick berated a bunch of grown-ass-men for running the Y-stunt double-Z backside pull like a bunch of Sallys or whatever.

Belichick fans just found more to love in “A Football Life.” Every mumble was an affirmation. But the documentary’s flashback to 2009 was a stark reminder that the whole shtick, the entire Cult of Belichick, is supported by a core belief that the coach himself has begun to undermine: The thesis is that we’re all in this together, and to hell with everyone else outside the locker room.

But how long does an NFL player buy into that Sam Spence orchestrated fairytale when they’re constantly seeing teammates treated as expendable chattel? How many friends does a Patriot have to see traded (Randy Moss, Richard Seymour) or cut (Brandon Merriweather, Gerard Warren, Leigh Bodden) before Belichick’s Us vs. Them propaganda starts to sound awfully hollow and insincere?

If the Patriots have a fatal flaw, it's their secondary. Belichick cut Merriweather and veteran safety James Sanders before the season. He cut Bodden last week. Belichick downsized his way into a staffing disaster.

For the past decade, Belichick’s grumpy-grandpa panache has been a source of inspiration for angry, authoritarian high school football coaches whose managerial style is defined by spittle, lingering sighs and southern-bumper-sticker-machismo. Middle-aged men have heroes, too.

On Sunday, Tomlin didn’t destroy the glorified myth of “Coach as Disappointed Dad,” but he offered another path to managerial success, a happier one without press conferences spent method-acting a severe personality disorder.

Tomlin let go. He trusted in the next man. He trusted his coordinators, his quarterback. He delegated control. He became an anti-coach.

And most importantly, Tomlin, just by being himself, showed us all how silly the façade of an anti-cool disciplinarian can look when exposed for what it really is: A swift kick in the ass dressed up in chintzy a windbreaker.

Down with the grumps. I don't know if it's ultimately better to be feared or loved, but I know which one is more fun. Somewhere between the time of Jack Lambert smoking cigarettes at halftime and the time when fans started beating each other up at tailgates, football used to be fun.

Tomlin is taking it back for all of us.