The Veterans Place of Washington Boulevard and BOB Project are collaborating on a plan for housing for homeless veterans. 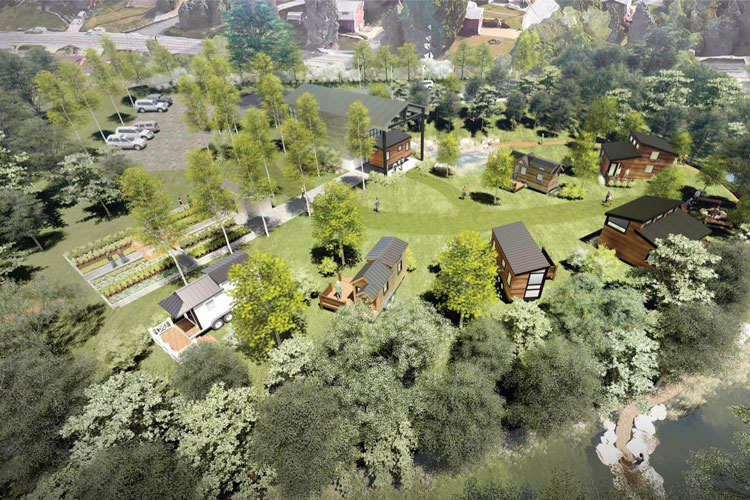 photo courtesy of the BOB project

Struggling veterans in the Pittsburgh area may soon have a place to call home. The Veterans Place of Washington Boulevard and a newly organized nonprofit organization known as BOB Project — “Bring out the Best in our community” — are spearheading a tiny-house community project to serve as a home for veterans leaving transitional programs.

“We decided that a final destination for veterans was needed,” Shawn O’Mahoney, acting project manager for the tiny-house community, and Veterans Place Executive Director Marlon L. Ferguson say in an email. “So often veterans are forgotten about, and this center and [its] amenities will bring the community to them.”

Currently, Veterans Place has a day program that picks veterans up from shelters on a daily basis and assists them with resources to get back on their feet. According to the directors, many are placed into the Veterans Place transitional unit, which provides case management for up to 48 veterans at a time. Services include anything from health-care issues, job resources and any other individualized care.

Graduate students at the Tepper School of Business at Carnegie Mellon University conducted a feasibility study for the tiny-house project, and their research developed into a plan. Organizers then connected with the architectural firm AE7, who created a specific site plan.

The project team has identified a 3.7-acre plot of land in Penn Hills, receiving tremendous support from Mayor Sara Kuhn and the entire planning department, the directors say. The project already has begun testing out its ideas.

“We introduced two smaller-scale tiny homes to Penn Hills from 84 Lumber and received positive feedback through and through,” the directors say. “We also introduced the project at our Memorial Day Parade, where many thanked us for bringing this project to our area.”

The project still needs to be brought to the planning board, but plans are to break ground in 2017. Although a preliminary budget exists, organizers continue to work to bring on corporate sponsorship and funding.

Aside from the tiny houses themselves, the site will include a community center providing multiple workshops, a community garden, walking trails and an apartment for family visits or partners of the community.

“The tiny house community [plan] seemed to check off most of the needs of veterans seeking homes or rentals all over the Pittsburgh area,” the directors say.