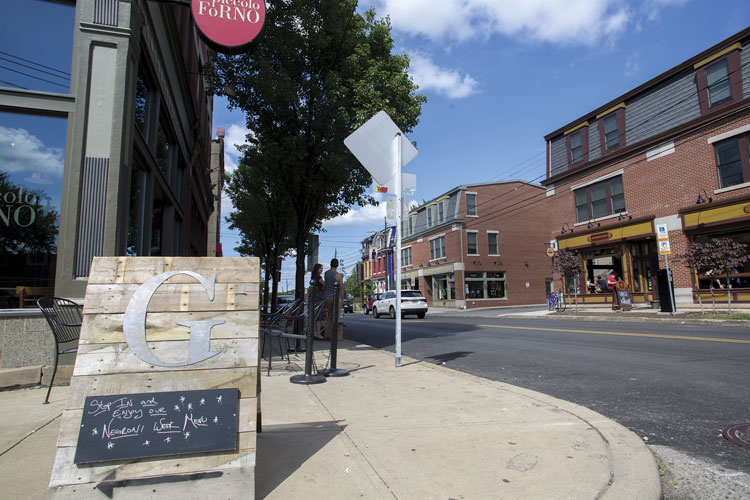 IT’S A GREAT WEEKEND TO WANDER IN LAWRENCEVILLE
Anyone shopping for a wedding present, birthday gift or awesome conversation piece knows it: There’s cool stuff to find along Butler Street in Lawrenceville.  Through Sunday, you can find great stuff en plein air as part of the Lawrenceville Summer Sidewalk Sale. If you tire yourself out hopping from store to store, recuperate inside Row House Cinema — it’s retro-teen-comedy week.
(Click here for Sidewalk Sale info)
— Sean Collier

EAT, ROCK OUT AND BE MERRY IN MCKEES ROCKS
After more than a decade of redevelopment efforts, McKees Rocks launched a free pop-up event  — FEASTival — in 2013 to show off its new businesses and facilities. With food trucks and music aplenty, the first iteration saw 500 attendees, which led to another edition in 2014 that brought in 1,500 guests. Now, with McKees Rocks’s multi-million dollar Father Ryan Arts Center up and running, Saturday’s FEASTival is your chance to take the drive to the Rocks and see what the neighborhood’s been up to.

MORNINGSIDE’S HOME BASE FOR BEER TAKES THE BAR EXAM
Most of our neighborhoods have a lot of bars. It’s kind of our thing around here. But it can be very refreshing when a particular corner of town has a clearly defined flagship — a watering hole that is identifiably the flagbearer for the neighborhood. In Morningside, that’s Bulldog Pub. The inviting Morningside Avenue bar is known for beer, burgers and a welcoming atmosphere — but how will the favorite tavern of this smaller neighborhood stand up to the Bar Exam? Find out in this week’s edition of After Dark!

On Saturday, Ireland’s road to independence will be commemorated with Easter 1916: Pittsburgh Remembers, a ceremony at St. Patrick’s Church in the Strip District followed by an “Irish wake” at Mullaney's Harp and Fiddle. — S.C.