This Week in Pittsburgh History: The Steelers and Pirates Visit the White House

It was a rare visit by two championship teams from the same city in the same year. 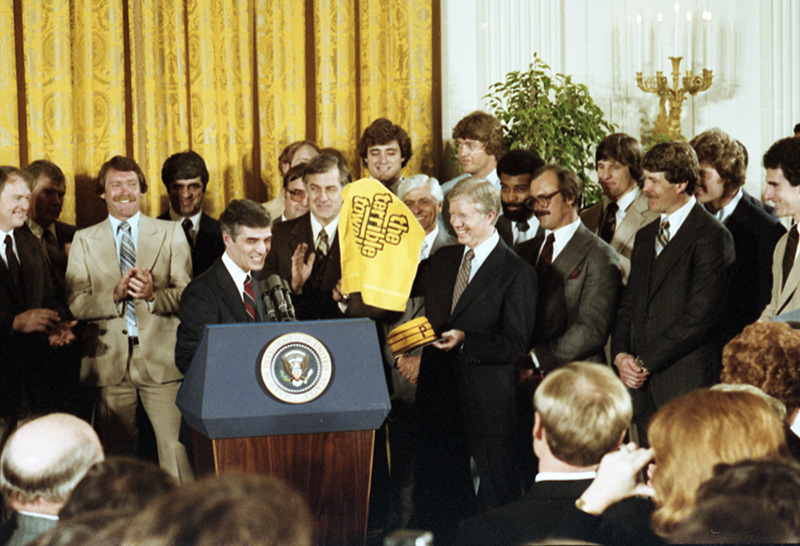 The Pittsburgh Steelers were the first Super Bowl champions to visit the White House on Feb. 22. 1980, and they shared the stage with Pittsburgh’s other championship sports franchise that year, the World Series-winning Pittsburgh Pirates.

Pittsburgh Mayor Richard Caliguiri presented President Jimmy Carter with a Pirates baseball cap and a Terrible Towel. In his remarks,  the President recalled his visit to the Pirates’ locker room moments after the Bucs defeated the Orioles in Game 7 in Baltimore.

“I escaped without getting tramped, by the skin of my teeth. But it was one of those exciting, historic moments in sports when the entire nation was thrilled at a tremendous achievement. I’ve not forgotten those exciting moments.

“Also, of course, we’ve got the Pittsburgh Steelers, who’ve shown the same kind of spirit and unity and courage and commitment and ability. Four times in the last 10 years the Steelers have gone to the Super Bowl; I’ve forgotten how many times they won — [Laughter] — four times.”

The President also singled out some of the teams’ individual stars for what they did off of the field, including the late Roberto Clemente for his relief efforts for the people of Nicaragua and Rocky Bleier for his military service in Vietnam.

“He was wounded severely. Some doctors, I understand, even said that he would not recover. But now he’s been able to overcome a combat injury of very serious nature, and he’s played 10 rugged years of championship professional football.”