Retired CMU art professor Susanne Slavick resides in an angular, Modernist home that was meant to usher in a new era of residential housing. 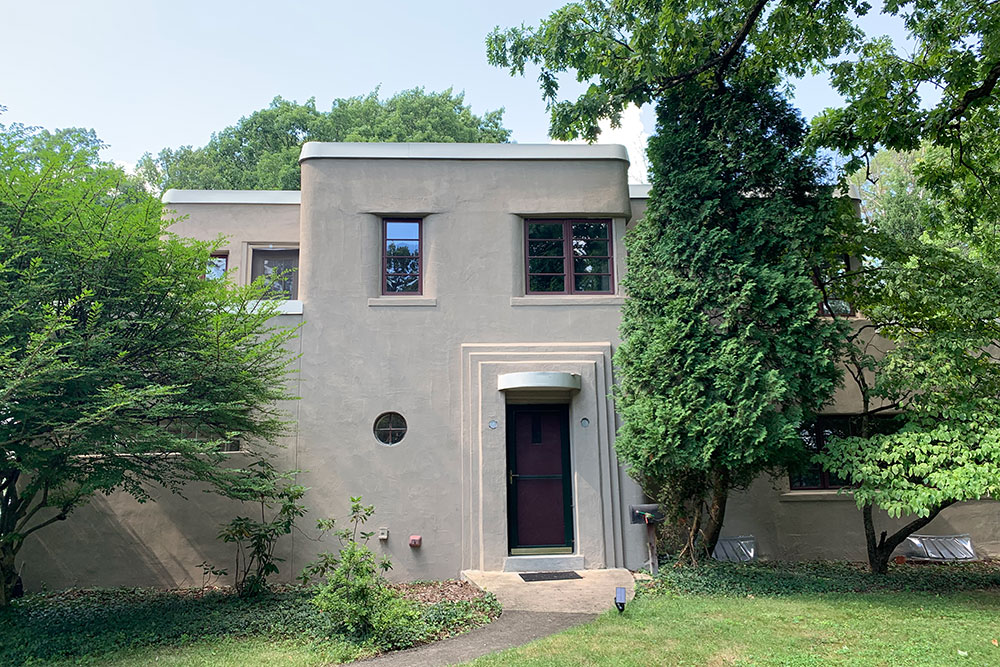 People like their houses to look like other houses. A drive down any residential street will confirm this.

We tend to be comfortable choosing from a limited array of familiar shapes, accessories and decorative motifs. A subtle twist here or customization there is usually sufficient to express our individuality. Most of us do not go in for blatant oddities.

Then there are people like Susanne Slavick and Quentin Beck. Slavick is a painter and retired Carnegie Mellon University art professor who lives in a remarkably unusual house in Ross. 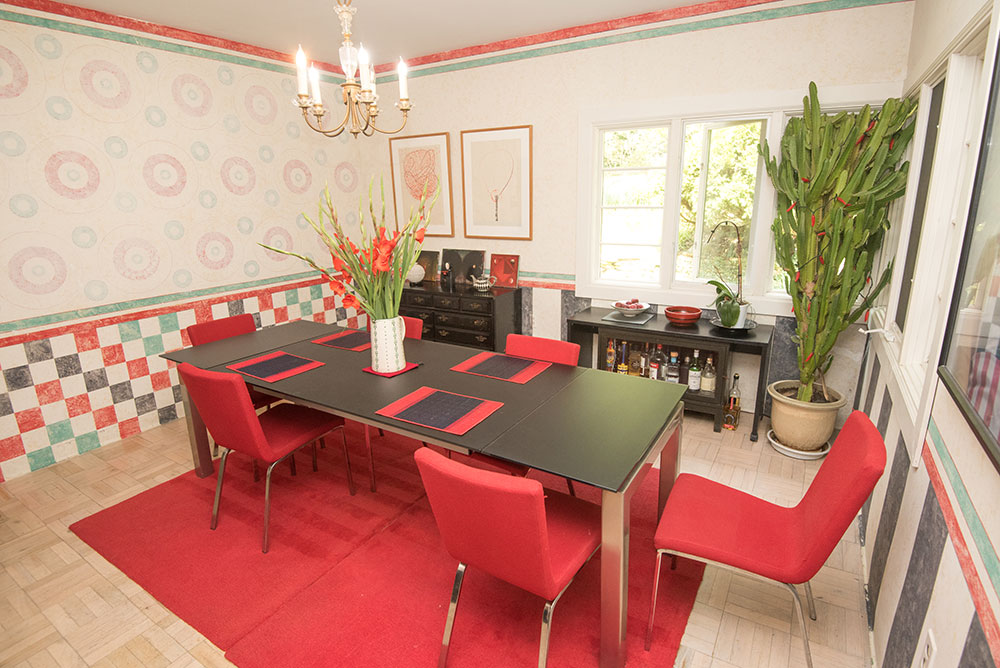 Beck was the young man who designed it almost 90 years ago.

Back then, he was a recent graduate from Penn State who had gone into business with his uncle doing residential construction with a new type of insulated reinforced concrete. Beck was the creative force behind Swan Acres, the region’s first suburban housing plan in what then was called the Modernist style. 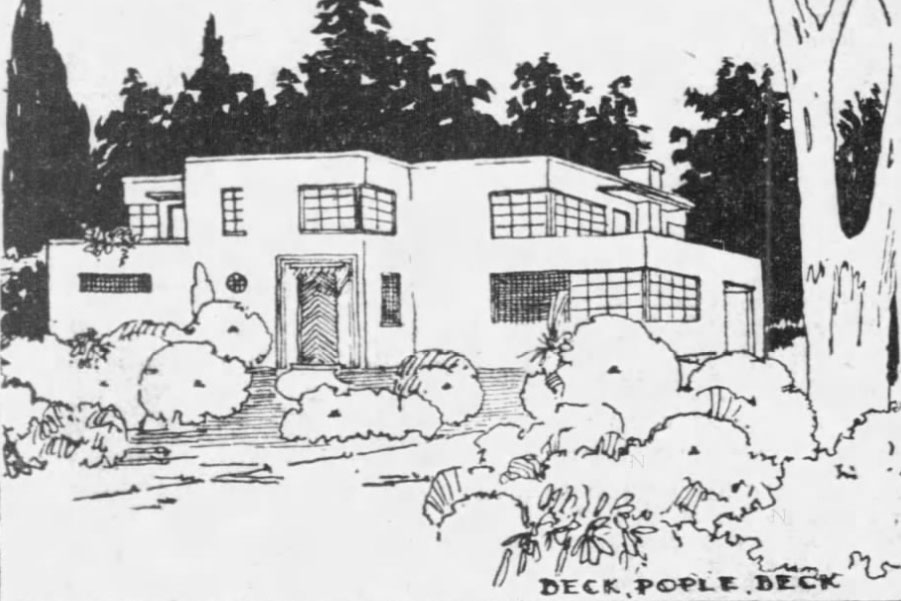 The blocky, low-slung, flat-roofed dwellings Beck created in Ross might also be classified as Art Moderne, Art Deco or International Style, a coinage that references the movement’s European origins. The terms aren’t precisely interchangeable, but one might say they reside in the same neighborhood. 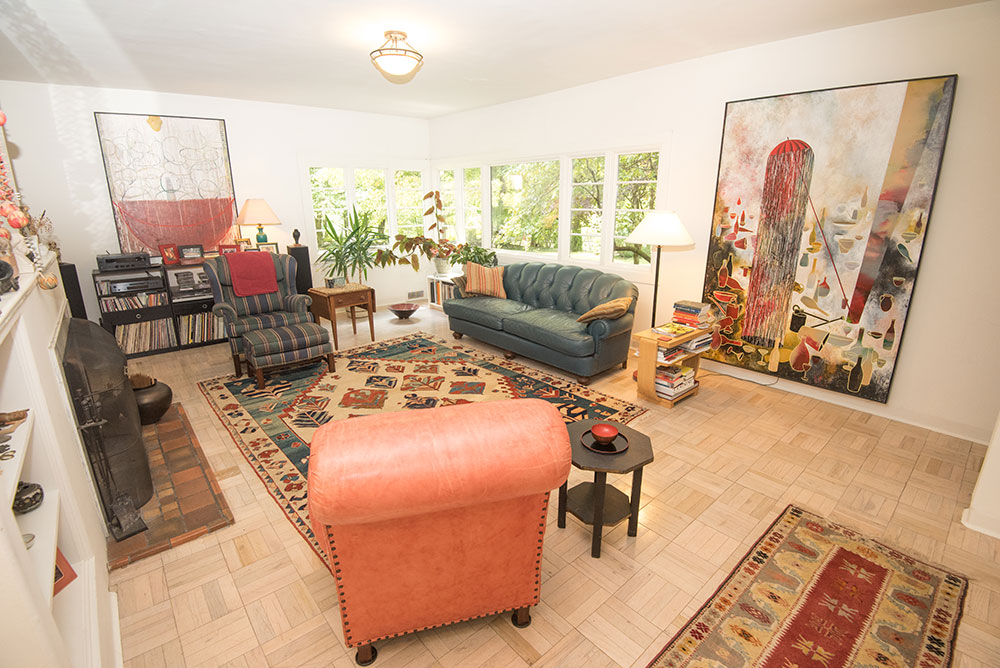 Houses in the unorthodox and arguably jarring style are seldom seen in typical neighborhoods, but they have unique charms. Take the living room of Slavick’s two-story house on Swan Drive, with its glass-block accents and the streamlined curve of its fireplace mantel, for example. A large wraparound corner window produces the pleasant sense of actually reclining under the shady limbs and pink-and-white blossoms of the dogwood trees just outside, rather than just looking at a flat picture of it.

“We just recognized the house has good lines,” says Slavick.

The daughter of an American literature professor and a high school French and German teacher, Slavick attended high school in Maine. She studied painting at Yale and then in Rome for a year before earning her MFA from Temple University. She moved to Pittsburgh in 1984 to accept a faculty position at CMU; she and her first husband bought the Swan Acres house five years later, shortly before the birth of their son.

Slavick employed her artistic abilities to decorate their home. It is full of paintings and photography by her and other artists; a Pompeiian fresco she discovered in a book from the campus library inspired a bullseye and checkerboard design she painted on her dining room walls.

The stucco on the outside is tan, bringing to mind adobe. But when this was a new model home in 1937, it was stark white and sleek, like the bridge of an ocean liner. That year, the trade journal Architectural Forum said Swan Acres would soon be “the nation’s first Modern subdivision.” 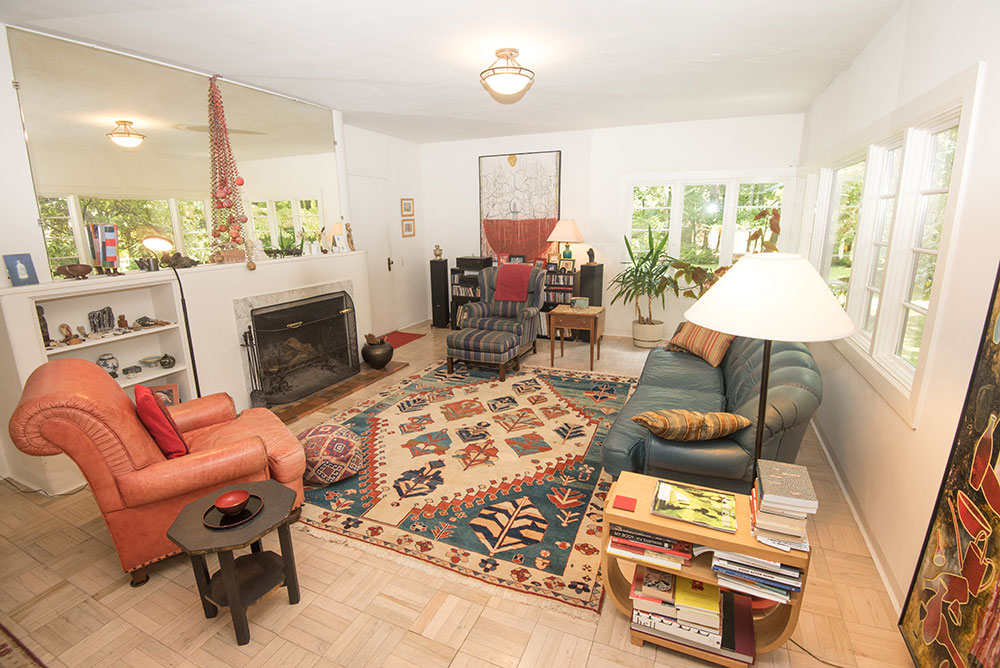 Harry Pople, a North Hills real estate entrepreneur, joined forces with the Becks to build four show homes in a new development off Babcock Boulevard. Pople told Architectural Forum he expected all 33 parcels to be sold by the following year, with all houses to be built in the angular Modernist style.

There had been neighborhoods like these before. Miami Beach was already awash in Art Deco houses by then, and in Indiana, a developer had bought half a dozen futuristic model homes from the 1933 Chicago World’s Fair and relocated them to his new community of Beverly Shores, on the dunes overlooking Lake Michigan. But if the claim that Swan Acres would be the first of its kind in America was overblown, the development was undeniably in the vanguard. 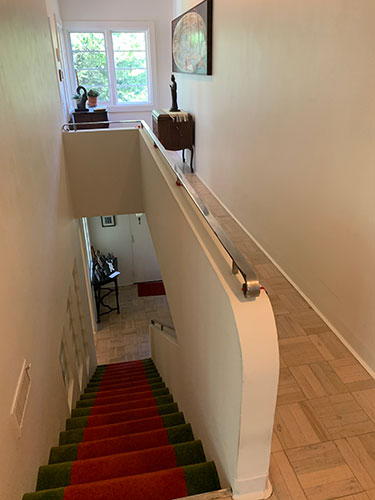 Unfortunately, Pople did not hit his sales targets. The short-lived firm of Beck, Pople & Beck dissolved soon after the four model homes went up. Some subsequent houses in the neighborhood nodded toward Quentin Beck’s originals, but the exclusive design restrictions were abandoned, and Swan Acres wound up looking more or less like other suburban plans of the era.

Pople’s vision that his development would be far removed from any hustle and bustle also turned out to be misguided. In the journal article, he said he had chosen a site “far enough out in the country to be five miles from any considerable shopping district.” But in 1951, the new McKnight Plaza Shopping Center just down the road would unveil the biggest parking lot in the North Hills, with 500 spaces.

The founder of Swan Acres stood his ground and lived in one of the original show homes. When Slavick moved in, Pople’s elderly widow, Emma Jo, was still living next door. The original owner of Slavick’s house, Fred Horst, was a banking executive and World War II Naval officer who was forced to sell after a merger left him with a gold watch but no more job.

As for Quentin Beck, his later home designs became less avant-garde, but he still kept an eye on the future. In his later years, Beck tried without success to win backers for his own mass transit concept, in which elevated trains would whoosh commuters into the city via clear plastic pneumatic tubes.

Slavick found love again in 1994 with another art professor at CMU, Andrew Ellis Johnson. Today, his art is as much of the interior decor as Slavick’s. Years ago, the couple had a large studio built next to the house where they both work, and Slavick is eager to spend more time there now that the demands of academia have receded.

This summer, after she retired and closed the book on 42 years of teaching, Slavick and Johnson finally got married.

Mark Houser is the author of “MultiStories: 55 Antique Skyscrapers & the Business Tycoons Who Built Them.”

This article appears in the October 2022 issue of Pittsburgh Magazine.
Categories: HOME + Design