The Boggs Mansion, now The Inn on the Mexican War Streets, is a testament to the legacy of an early Pittsburgh tycoon. 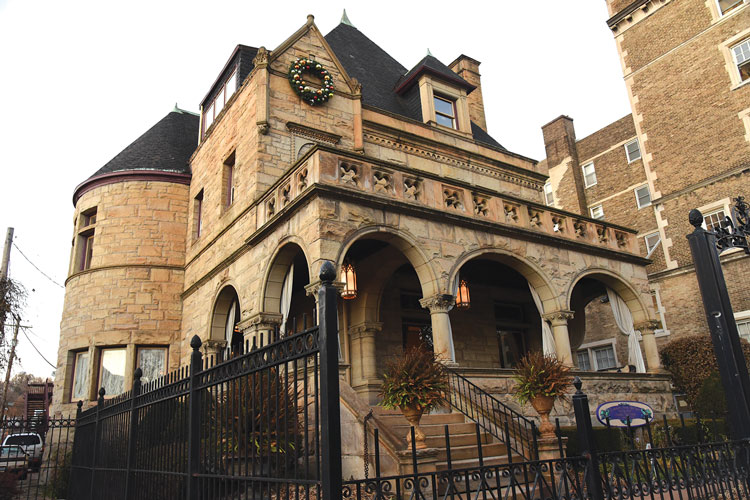 Of the remaining traces that the North Side was once the stomping grounds of millionaires, the stone townhouse on North Avenue that once belonged to Russell H. Boggs is among the finest.

Built as the 19th Century came to a close, the house has outlived the department store established by Boggs and his partner, Henry Buhl, in Allegheny City in 1869. Boggs & Buhl was demolished in 1960 for Allegheny Center Mall, now Nova Place. The store served the “carriage trade” — the well-to-do of old Allegheny City — and appropriately, the proprietors saw to it that their delivery wagons were drawn by handsome steeds.

Boggs also basically created the North Hills. The electric trolley line he built, called the “Harmony Route,” stretched from Pittsburgh to his hometown of Evans City and onward to New Castle. When it began service in 1908, at each stop along the tracks — Ingomar, Wexford, Bradford Woods — Boggs’ North Pittsburgh Realty Co. offered suburban lots for sale.

Boggs’ daughter also preferred the countryside, especially the family’s summer home in Sewickley Heights. When her father died in 1922 from injuries suffered in a fall, she sold the North Side townhouse to a seminary next door.

Retired teachers Karl Kargle and Jeff Stasko, partners for 40 years now, at one time owned 18 properties in the Mexican War Streets. When they bought the Boggs place in 1998 for $100,000, it was in grave disrepair. Downspouts in the stone walls had silted up, and water leaks formed icicles on the central staircase. Termites had consumed much of the woodwork, and a finial on the roofline had crashed through the porch roof and lay at the door like a tombstone.

​Kargle and Stasko estimate they put close to a million dollars into restoration. In 2000, they opened The Inn on the Mexican War Streets. Preserved articles from Boggs & Buhl, such as a piano and an old wind-up Victrola, can be found throughout. A mantelpiece of rare blood marble dominates the main hall.

A Steelers room with memorabilia nods to the sports fans who are frequent clientele. Still stored in the basement, however, is a row of seats from Three Rivers Stadium. “Jeff won’t let me bring them up,” Kargle says. “They have chewing gum on ‘em.”

The owners live in an expansive carriage house in back. For a year, they ran an upscale restaurant there; Stasko is also a chef who taught culinary arts and hotel management. Now the kitchen is for private occasions only — such as Kargle’s birthday party a few months ago.

For $159 on a weeknight, guests can stay in the master bedroom and enjoy the same view over West Park that Boggs did a century ago. Or, if that has a lasting appeal, the owners say they’re always ready to consider an offer to buy the whole place.