A historic row house in Deutschtown preserves the past — and adds kitschy touches. 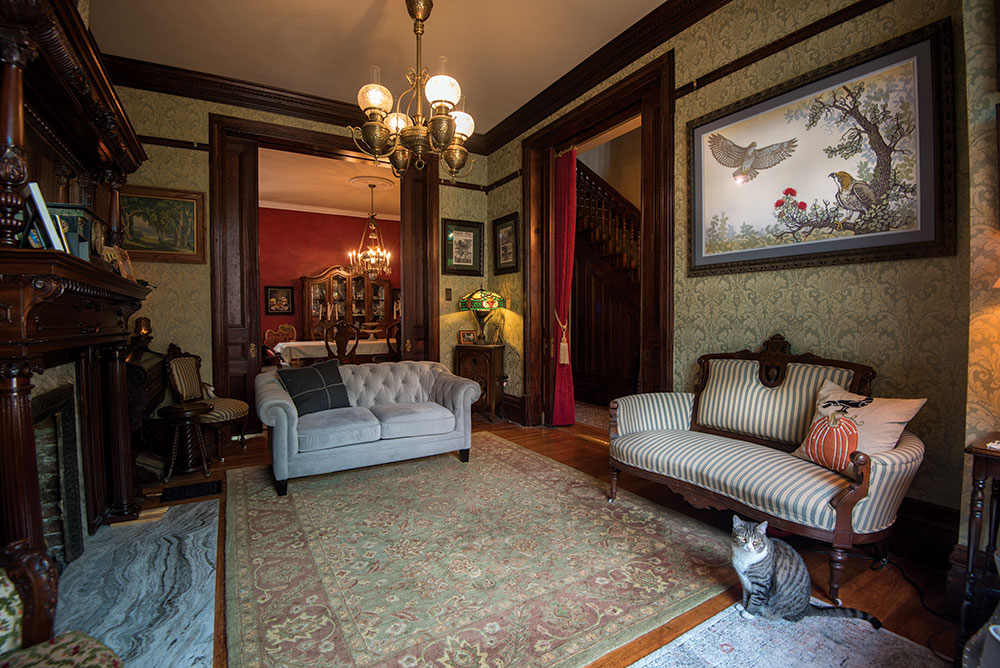 Sunlight filtering through the stained glass windows of a red-brick row house on Lockhart Street in Deutschtown glints on the glossy blue paint of a Pennsylvania state historical marker resting in the foyer. Until the government determines that installing signposts is essential work again, the newly minted sign commemorating the home’s first resident, Pauline Hanauer Rosenberg, will have to stay inside, leaning against the ornamental wooden staircase.

That doesn’t greatly perturb current resident Matthew Falcone, who scraped the paint off the woodwork of the staircase and banister, along with the window casing and door frames, the parlor pocket doors and crown molding, to get them all to look like they did when newlyweds Pauline and Hugo Rosenberg first crossed this very threshold in 1889, back when the place was brand new. It was through his efforts that the sign exists at all. 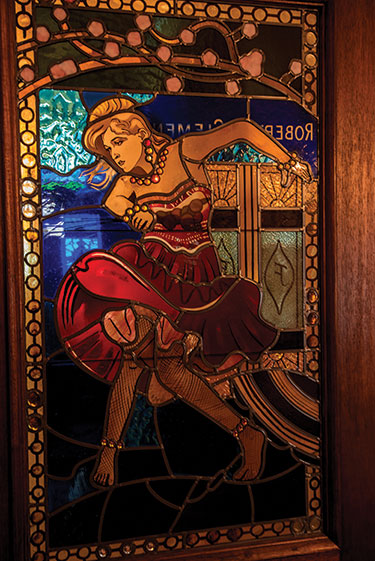 After working several years to restore the Victorian trappings of his family’s house, Falcone decided to find out more about its original residents. Hugo Rosenberg was a prosperous merchant, and Pauline Rosenberg, nee Hanauer, came from a prominent Allegheny City family and was educated at Barnard College in New York.

In her mid-20s, Pauline was a delegate to a women’s congress at the 1893 Chicago World’s Fair; in its aftermath, she became a founder of the National Council of Jewish Women, then served as the Pittsburgh chapter president before being elected president of the national organization in 1905. By then, the Rosenbergs had moved to accommodations more spacious than their three-story rented flat on Lockhart Street. But she stayed active in progressive causes, helping to establish the Irene Kaufmann Settlement for immigrants in the Hill District, advocating for women’s suffrage, and heading the Pittsburgh Women’s Club before she and Hugo moved to New York City in 1915.

Falcone was pleased to discover the Rosenbergs were members of Rodef Shalom in Squirrel Hill, the same congregation where he and his husband, Adam, are members. Adam is a partner at a civil law firm based in Washington, D.C., while Matthew, a former art professor, is an active volunteer in the community as president of Preservation Pittsburgh and a member of the Pittsburgh Historic Review Commission.

Through Matthew’s efforts, the paperwork is in motion to have city, state, and federal authorities designate the Falcones’ property on Lockhart Street as a historic landmark. As a member of the city commission that considers such applications, Falcone says this experience has brought a new perspective.

“I think for me what really fundamentally changed was when I had an understanding that my own house had significance, and there was a really important narrative there that I didn’t know moving in. I can definitely understand and sympathize with people in the exact same situation,” he says. “There’s still a lot of places out there — a lot of houses and buildings — where the memory may have faded.”

When Falcone discovered that the building’s owner, and the Rosenbergs’ landlord, designed and sold stained glass, he became especially enthralled. Falcone earned a master’s in art history at the University of York in northern England, and a significant portion of his graduate work involved repairing and replacing stained glass at York Minster, considered one of the world’s finest cathedrals. After he and Adam bought the place a decade ago, Matthew made several historically accurate pieces for the front of the house, including a front door transom with the number 16 — an original street number that no longer corresponds with the present address — and another with pineapples for the parlor.

He eventually quit making stained glass himself, concerned lead on his work clothes could harm their two young daughters. But the windows keep coming, only now Falcone commissions them to spec. They are a sight to behold. 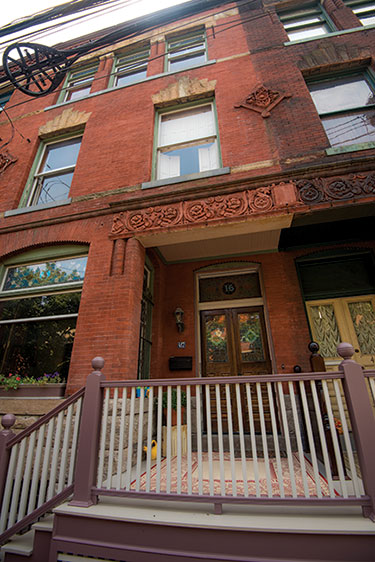 Replacing a pane in the door between the foyer and dining room, Falcone took inspiration from the long-gone original of a dancing Victorian maiden. Instead of the 1880s, the replacement is pure 1980s, with a reproduction of Cyndi Lauper gyrating wildly on the cover of her debut record, “She’s So Unusual.” The stained glass treatment enhances a background detail many Pittsburghers might have missed the first time around — on the wall behind Lauper is the name of Pirates legend Roberto Clemente (pictured).

Another piece with scenes from “Moonstruck” and “The Golden Girls” firmly puts the kitsch in kitchen. And in the parlor is one of a family crest, with Steelers hypocycloids above a falcon and wolf, representing Matthew and Adam’s former surnames, Falk and Connor, which they combined for their married name, Falcone. It all makes sense in Deutschtown.

“This neighborhood is definitely one of the quirkiest in the city,” Matthew says. “From its onset, it’s always been a socioeconomically and ethnically diverse neighborhood. You have a real hodgepodge of folks.”