After remaining vacant for nine years, this Victorian-style house in Allegheny West has regained its original character. 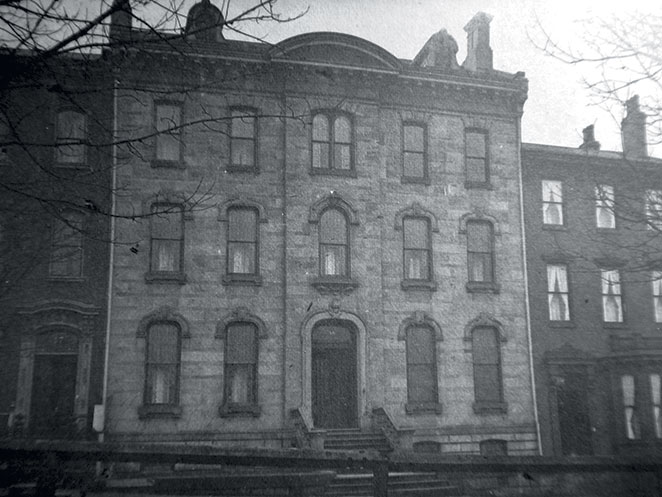 Holmes Hall in 1886/photo by William A. Caldwell Jr.

John DeSantis knows a worthwhile house when he sees one.

As former chairman of the Historic Review Commission for the City of Pittsburgh and a member of the Allegheny West Civic Council, DeSantis learned of Holmes Hall when he moved in 1977 to the Allegheny West neighborhood of the North Side. The home had been empty for nearly a decade when DeSantis was volunteering there during the Allegheny West Christmas Candlelight House Tour. He says he immediately recognized its potential for restoration and greatness.

“It was dilapidated, with plaster crumbling and neglect everywhere, but it was all still there — intact and quietly waiting for its next chapter,” he says.

Within a few months, DeSantis had reached an agreement to purchase the house. He spent four years restoring it before he and his family moved in on Christmas Eve in 1992.

Holmes Hall, established in 1868 on two city lots facing Allegheny Commons Park, was built for Letitia Caldwell Holmes and her young daughter. The 18,000-square-foot home was named for Letitia’s husband, who died in 1863. The surrounding neighborhood once was populated with well-known Pittsburgh families and residents — among them the family of Gertrude Stein, the Laughlins, the Kaufmanns and the Joneses of Jones and Laughlin Steel Company.

​DeSantis says he felt fortunate to find most of the home’s original aspects remained intact. He also helped to locate and bring back a few significant pieces that had been lost or sold. 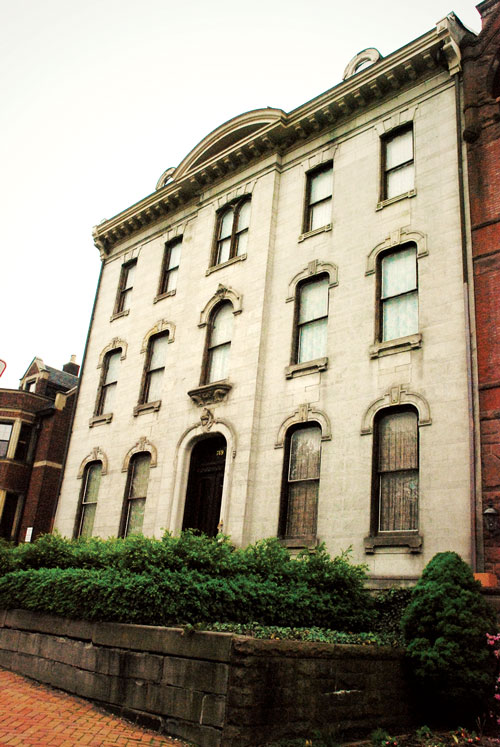 Within four years of purchasing the home, DeSantis tracked down two overmantels from the ballroom, three bronze fixtures from the parlor mantel and a bronze figure of a woman that adorns the newel post in the hallway. DeSantis found the mirrors by chance in the possession of two local antique dealers who live a few streets away from Holmes Hall. Also by chance, DeSantis found the newel-post figure in a catalogue for Great Gatsby’s Auction Gallery in Atlanta. When he went to pick it up, he found the other bronze fixtures there as well.

​DeSantis restored the home with a Victorian-period interior. “This house looks [today] largely like it could have looked in the first 25 years of its life,” says DeSantis. “I’m confident that Letitia approves in every way.”

He’s also incorporated pieces that once were used in other prominent local homes. In the parlor, the andirons originally were used with a fireplace in the Jones’ mansion. A painting that hangs near the mantel came from the Laughlin mansion, and chairs in the front left corner of the room came from the Mellon house in Shadyside.

“I’ve collected deliberatively things from Pittsburgh’s past from this era, along with other pieces as well, because this is part of the fabric of what went before here,” says DeSantis.

After Henry Buhl Jr.’s 1884 mansion burned down in 2002, DeSantis also obtained the rescued front porch — hand-carved by a German artisan — and rebuilt it in his backyard. The green-and-yellow porch enhances quaint gardens that flourish behind Holmes Hall, as do the grapevines DeSantis planted on the day he signed the sales agreement for the home.

“Over the years, we’ve used those grapes in making our own wines, and my grandsons and I enjoy plucking sweet white concords on warm summer days,” he says.