This Old Pittsburgh House: Built in 1803 and Still Occupied

The log cabin and church that make up part of the Depreciation Lands Museum in Hampton Township depict everyday life in the 18th century. 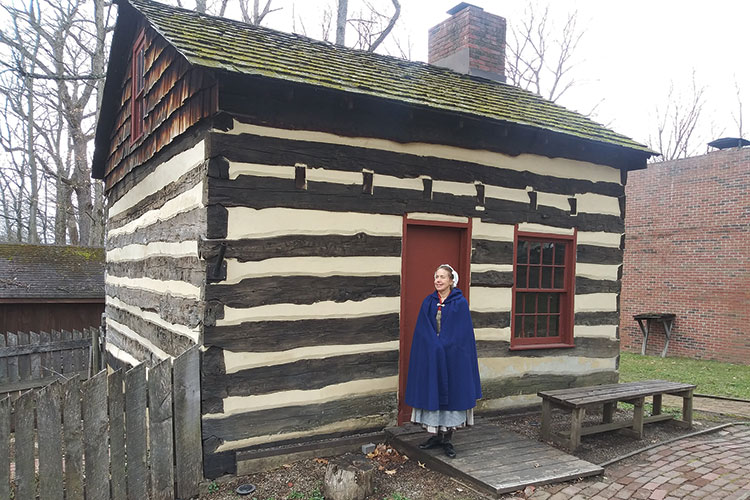 The welcoming smell of homemade stew bubbling above a cozy hearth fire tantalizes visitors at the old log house.

But guests at the Depreciation Lands Museum in Hampton Township will have to be satisfied with the aroma alone. Whatever the cook is whipping up — ham hocks and greens, pheasant, rabbit — is for the volunteers after their day is done.

It does seem a fair reward. From 1 to 4 p.m. each Sunday from May through October, locals assume the roles of western Pennsylvania pioneers in the late 1700s while giving demonstrations, including spinning, weaving and woodworking. While all are dressed in historically appropriate clothing, some wear outfits they hand-sewed themselves using linen produced from flax grown on the grounds.

The styles are generally familiar, though sometimes they can surprise. Take Dennis Raible, who occasionally accompanies his tricorne hat and hand-stitched waistcoat and knee breeches with an extravagant white floral dressing gown. Known as a banyan, it was the height of male summertime fashion in that era.

“It’s interesting to experience history in the way people did in that time, and to see just how hard life was,” says Raible, who trades his regular sales job in the wholesale beer business for the role of farmer, carpenter or merchant on Sundays. “I’m actually surprised we’re here as survivors, considering how hard it was to live in the 18th century.”

Not much is known about Thomas Armstrong, the frontiersman who built the 18- by 19½-foot log house for his family in 1803. But he would still recognize his simple, sturdy abode, though it is a bit shorter. When the local historical society purchased it from his descendants in 1973 and moved it here from its original site a mile away, the sill logs at the foundation were rotted beyond saving. So the house is now 9 logs tall, rather than its original 10.

It’s still in the Depreciation Lands, though nobody calls it that anymore. In the pre-1783 era, the territory stretching from the Allegheny and Ohio rivers north to the shores of Lake Erie was closed to settlers. Lenape, Seneca and other Native American tribes used it chiefly as a hunting preserve. Pennsylvania bought it from them after the Revolutionary War, and parceled out the southern portion to veterans to compensate for the fact that their wages in Continental currency had steeply depreciated in value — hence the peculiar name.

Armstrong’s house was relocated to the grounds of the 1837 Pine Creek Covenanter church, built by a breakaway congregation of Scots-Irish Presbyterians. The church now is the main display area of the museum, stocked with frontier tools and display cases and a large working loom. It’s the favorite place of Karen Parsons, the volunteer coordinator and retired music teacher who has been working there 20 years. Her hands and feet fly over the loom’s churning wooden handles and pedals, worn smooth over generations. “It lets you reach out and touch people from 200 years ago,” she says.

The museum also has an herb and dye garden, an outdoor beehive oven and smokehouse, a blacksmith shop, a barn that houses a Conestoga-style covered wagon, and a one-room schoolhouse where Parsons sometimes acts as schoolmarm, teaching 15-minute lessons to visiting children around the potbelly stove. Consistently the most popular subject is neither reading, nor writing, nor ‘rithmetic — it’s punishment. Kids love it when she gets out the dunce cap, she says, and they giggle when made to stand with their noses to the doorframe.

The tavern on the grounds has both a working modern kitchen as well as a historically accurate cooking fireplace. If you decide to rent it for a frontier-style dinner party, check with the volunteers first. They might share their recipe for pheasant.

This article appears in the June 2019 issue of Home & Garden.
Categories: HOME + Design