Jim and Rebecca Stehle raised their family in the four-bedroom, Craftsman-style home filled with original details. 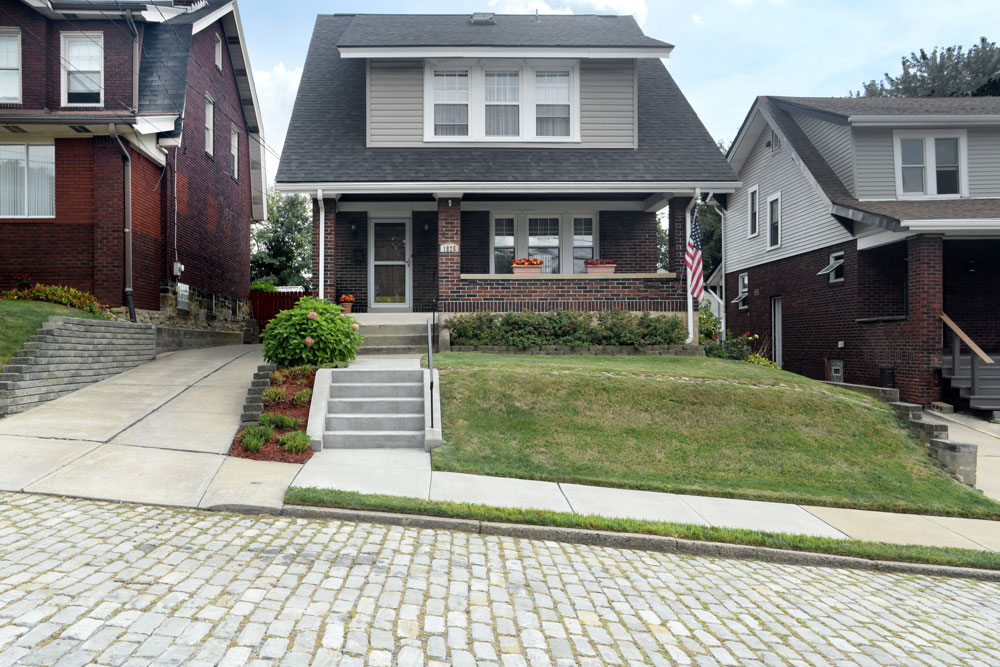 Pittsburgh is the kind of town where it’s still common to find families who’ve lived in the same place for 40 years. The city is full of nice little neighborhoods — and nice folks — so why move?

After all, that’s exactly how Jim and Rebecca Stehle wound up staying at 1825 Kleber St. in Brighton Heights for more than four decades.

“We moved here in 1982,” Rebecca says. “It was very neighborly, a very family-oriented street. Back then, kids still played in the street.”

The Stehles raised three children in the four bedroom, one full and two half-bathroom home. Now empty-nesters, they’ve moved to a one-level ranch home nearby.

“We were one of the last original families to be there that long,” Rebecca adds. 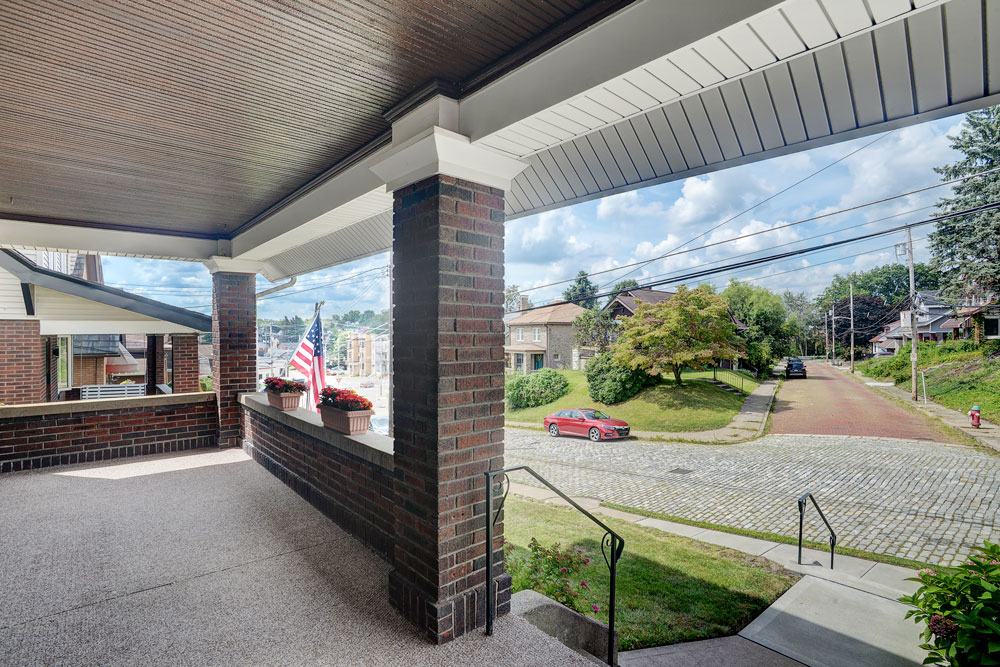 The Stehles are only the second family to own the two-story, Craftsman-style home, which was built in 1930. The brick-and-siding home sits on a nice-sized lot and features a lovely porch as well as a front yard with manicured landscaping. The driveway is able to park two cars in tandem. 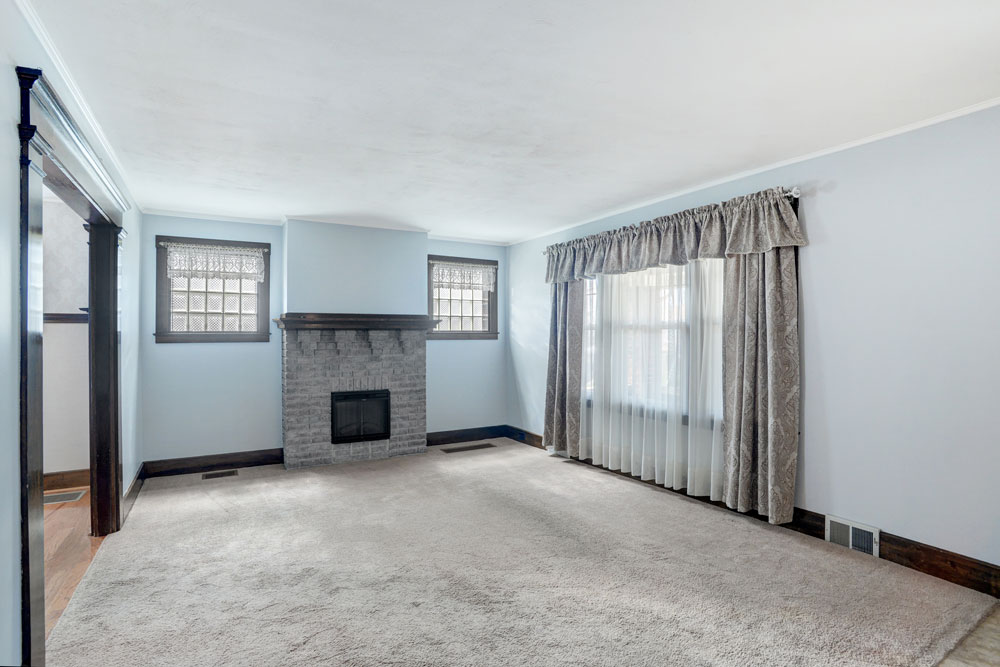 Inside, the home opens to a carpeted, generously sized living room with the still-intact original trim and stain. The fireplace has a stone façade and is flanked by a pair of windows. There’s also a handy coat closet.

“Some of the rooms still have hardwoods,” Rebecca says. “We added some new subflooring to the rooms with carpet.” 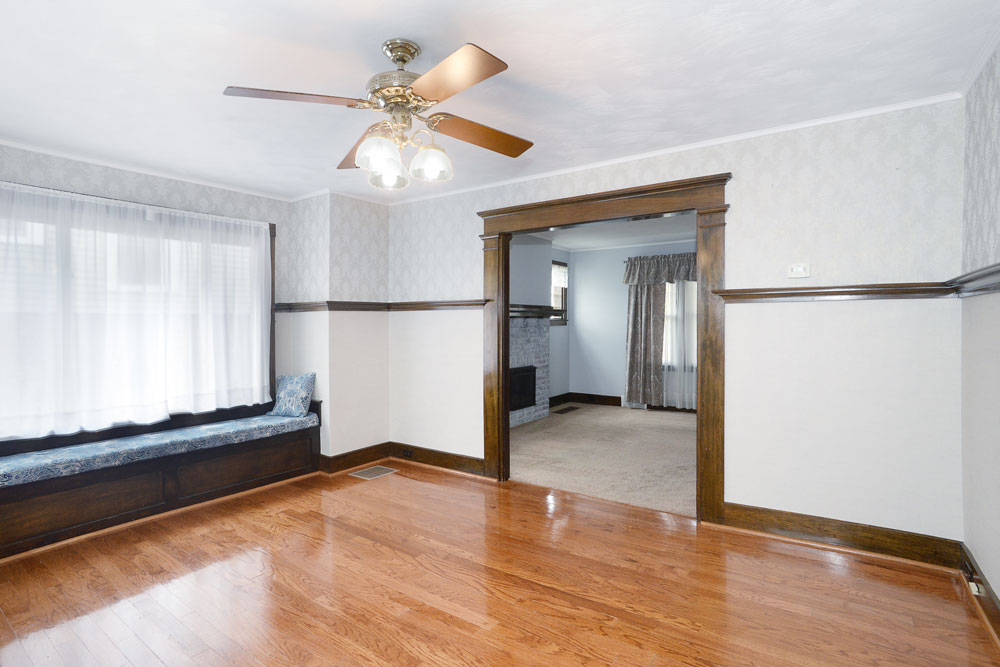 At the far end of the dining room is a large window with a built-in seat. A chair rail runs the circumference of the room; The wall is painted a creamy white below the railing, while a soft jacquard print wallpaper above it adds a nice touch.

As their family grew, the Stehles say they entertained a lot in the home. Over the years, they renovated the kitchen twice, most recently four years ago.

“We upgraded the cabinets, bought all new stainless appliances and replaced the countertops,” Rebecca says. “We also added a nice new wallpaper.” 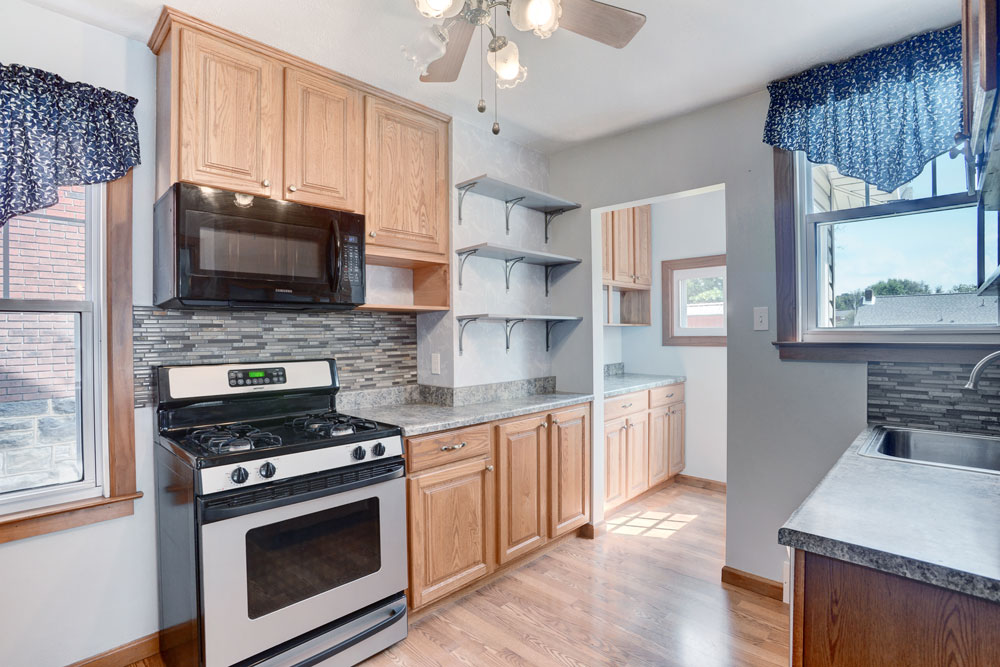 They made the most of the kitchen’s layout, adding a stack of open shelves that are both practical and on-trend to a chimney wall. The couple also relocated a back door, turning a formerly underutilized space into a mudroom.

“The door went straight out to the backyard,” Jim says. “We decided if we put the door on the side, we could continue with the cabinetry. We modified the back so the exit also went to the new side patio.” 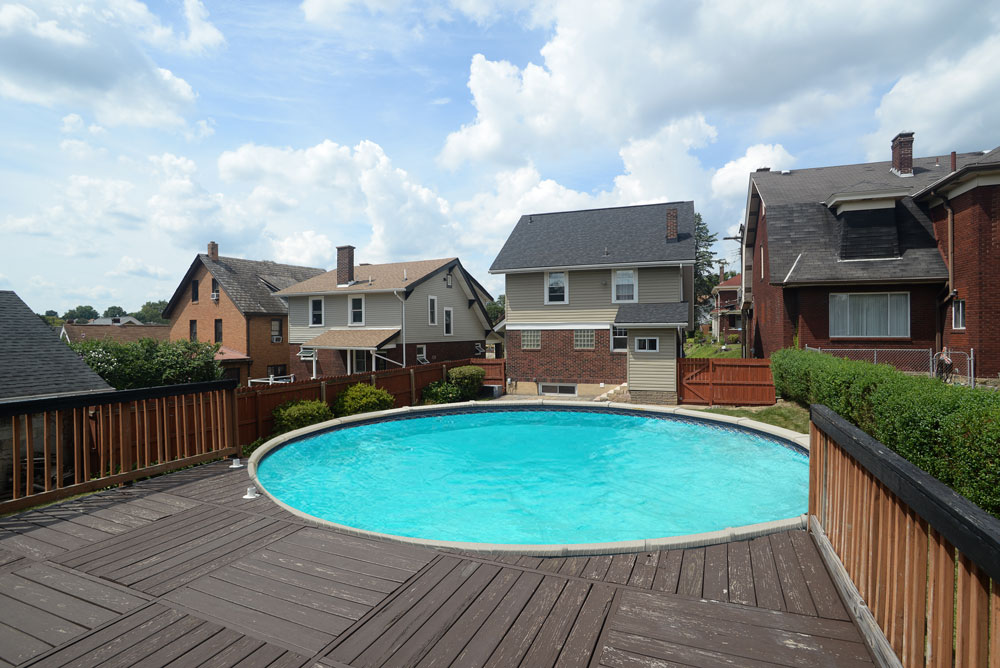 Because of the above-ground pool, the yard was required to be fully fenced in. A large leisure deck surrounds the pool, and there’s an additional safety rail the couple installed for their grandchildren. The yard also hosts a large storage shed.

On the home’s second floor are three bedrooms and one full bathroom. Facing the street, the front primary bedroom has wallpaper, a chair rail, crown molding and a bank of three windows. There’s also an attached powder room and nice-sized closets. 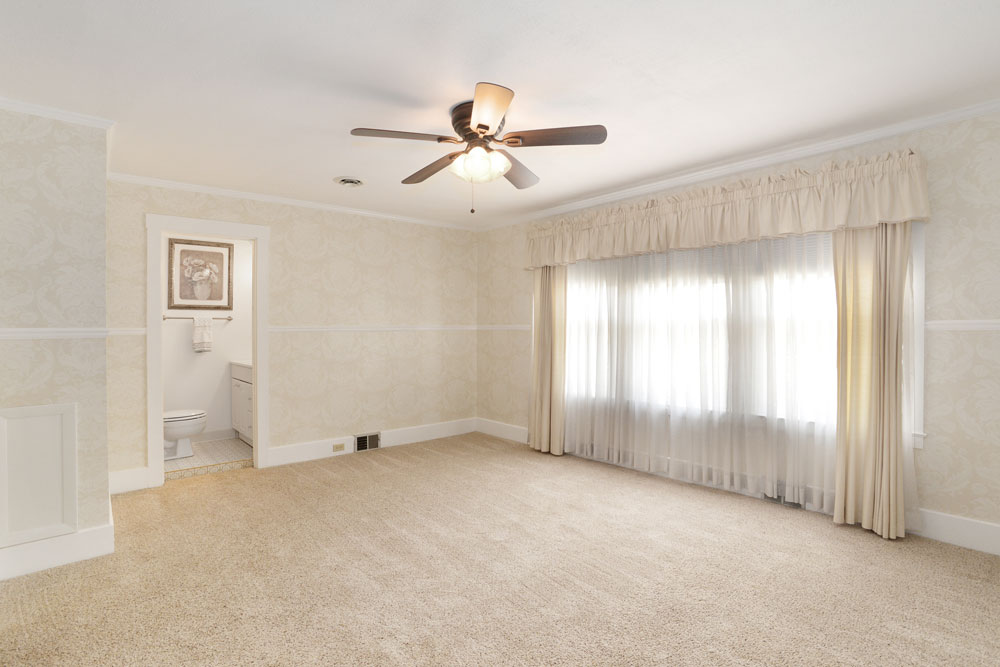 The two other bedrooms are similar in square footage. One is wallpapered and the other is painted blue; The decor in both plays nicely against the natural-stained woodwork. 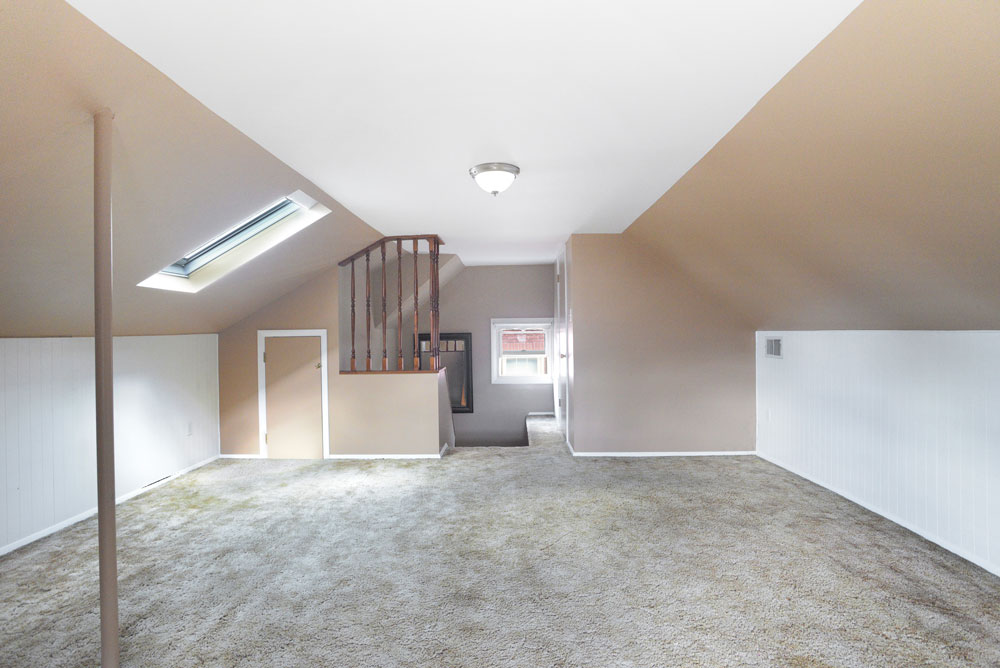 The third floor has been wonderfully finished with the addition of closets and a smart paint job that enhances the ceiling dormers. The couple also replaced the skylight when they replaced the roof in 2021.

“We had two sons and they wanted their room up there,” Rebecca says of finishing the attic space.

The large, open basement holds a laundry room and a separate powder room with a white porcelain pedestal sink.

As they move on to their next phase of life, Rebecca says they’ll take their fond memories of the neighborhood with them.

“We had grandparents from both sides that lived in Brighton Heights,” she says. “There’s a great sense of community and family that we all really enjoyed.”

About: Brighton Heights (brightonheights.org)
Population: 7,247
Planes, Trains & Automobiles: A 21-minute commute to the airport. Daily transport via Pittsburgh Regional Transit. Street parking, Rideshare.
Schools: Pittsburgh Public Schools (pghschools.org).
Neighborhood: The neighborhood is undergoing a renewal, thanks to its convenient location along Route 65 as well as an amazing inventory of stately homes and churches that are loaded with ornamental woodwork, stained glass windows and original fireplaces. An annual neighborhood house tour features many of these elegant buildings. Large maple trees, a local swimming pool, access to Riverview Park and a strong community group also are attracting many home buyers. Eleven separate sets of city steps keep the neighborhood connected.