This Brit Fell in Love with Pittsburgh's Dirt

During the Civil War, a British writer was enchanted by Pittsburgh’s dirt and soot. 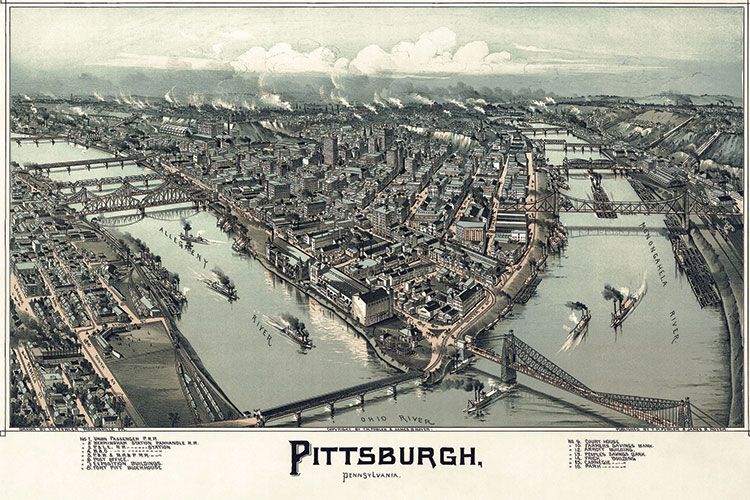 After all the spring rains, Pittsburgh this year is lush and green. If you stand at the West End Overlook, the vegetation on the steep hillsides of Mount Washington and on the North Side is impressive. There’s something primordial and beautiful about the trees and plants and wildflowers thriving here. But it hasn’t always been so.

Travelers in the 19th century seemed to relish portraying Pittsburgh as a dirty, smelly carbuncle of a place, a world capital of coal smoke and industrial pollution. Perhaps the most quoted put-down of the city was James Parton’s 1868 description, comparing the view from the Hill District into the Strip to “Hell with the lid taken off.”

Several years before Parton’s quote, however, as the not-so-united states of America were engaged in the Civil War, the popular British writer Anthony Trollope came to North America for travel — avoiding war zones and potential battlegrounds. He stayed in Canada and in states that had not seceded from the Union; eventually, he published “North America,” a travel book in two volumes, the second of which included a brief stop in Pittsburgh.

He was direct: “It is without exception the blackest place which I ever saw.”

Trollope did, however, recognize a good urban location when he saw it and understood the beauty of Mount Washington: “As regards scenery it is beautifully situated, being at the foot of the Alleghany [sic] mountains, and at the juncture of the two rivers Monongahela and Alleghany. Here, at the town, they come together and form the river Ohio. Nothing can be more picturesque than the site; for the spurs of the mountains come down close round the town, and the rivers are broad and swift, and can be seen for miles from heights which may be reached in a short walk. Even the filth and wondrous blackness of the place are picturesque when looked down upon from above.”

One has to wonder if he exaggerated. “I was never more in love with smoke and dirt than when I stood here and watched the darkness of night close in upon the floating soot which hovered over the housetops of the city. I cannot say that I saw the sun set, for there was no sun.”

Although he doesn’t mention his hotel by name, he ends his report with some personal specifics about bathing in a sooty city: “Everything in the hotel was black; not black to the eye, for the eye teaches itself to discriminate colours even when loaded with dirt, but black to the touch. On coming out of a tub of water my foot took an impress from the carpet exactly as it would have done had I trod barefooted on a path laid with soot … ‘You shouldn’t damp your feet,’ a man said to me, to whom I mentioned the catastrophe. Certainly Pittsburg [sic] is the dirtiest place I ever saw, but it is, as I said before, very picturesque in its dirt when looked at from above the blanket.”

That pervasive layer of industrial soot may be hard to imagine now, but it’s how this city grew to prominence. Sadly, we still get bad marks for air pollution from the American Lung Association, so we still need to clean up our act, more than 150 years later.

This article appears in the July 2019 issue of Pittsburgh Magazine.
Categories: Rick Sebak