Think Outside the Walls

Boundary-pushing theater company Off the Wall Productions moves into a new home in Carnegie. 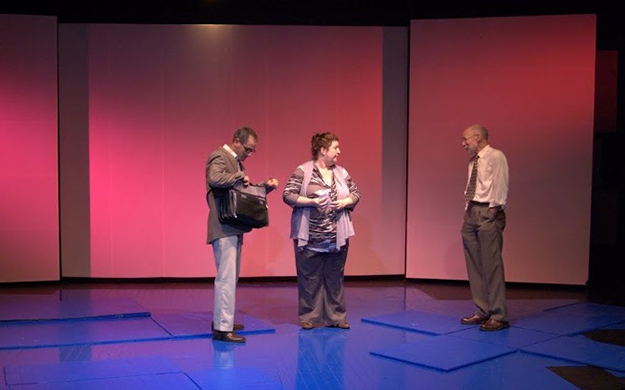 Way back when, we gave the stamp of approval to Off the Wall Productions — a plucky theater company in Washington, Pa., that seemed determined to push boundaries and tackle difficult work despite their impressive distance from the Cultural District.

From their 2007 birth through the spring of this year, they mounted acclaimed productions of daring work, from Neil LaBute’s gut-wrenching 9-11 drama The Mercy Seat to Diana Son’s explosive sexuality drama Stop Kiss.

And — while they developed a devoted following — it may have been too hot for Washington.

“We started out as a community theater, and people wanted Neil Simon and musicals,” explains Managing Director Hans Gruenert. “Which we didn’t want to do. So in our second year, we became an equity house and we used our theater to develop new plays. We developed quite an audience from Pittsburgh, but lost our audience in Washington — we did have a hardcore audience there of about 50 people, but a lot of people gave up on us.”

The problem stretched beyond a lack of Brighton Beach Memoirs. The old building they were renting had a laundry list of problems — including leaks so bad that the audience stood to get rained on during particularly bad storms. There wasn’t a decent place for a post-show meal or a pre-show drink. Finally, the lease was up.

Enter the borough of Carnegie, who Gruenert says “has done just about anything for us.” The small town through the tunnel was offering moving grants for businesses, and Off the Wall jumped at the opportunity. After gutting and renovating an office building, the company has a handsome new home on West Main Street. “They made us very welcome,” Gruenert adds.

Inside, take note of the music (highlighting a different local group or musician with each production) and the small gallery down the hall (doing the same for a rotating crew of local artists.) Pick a seat in the intimate and comfortable theater, perfect for Off the Wall’s fearless productions.

And if you go this weekend, you’ll get an excellent, moving show, too. The Other Place, Sharr White’s domestic drama about the daily tragedies of dementia, is a captivatingly crafted piece of work; we are led, unreliably, through a full deck of mysteries by aging biophysicist Juliana, played by Virginia Wall Gruenert (Off the Wall’s Artistic Director and Hans’ wife.) The performance is heartbreaking; the supporting turn by Mark Conway Thompson as Juliana’s beleaguered husband, Ian, is even more so.

If it sounds like a heavy evening at the theater, it is and it isn’t. The Other Place — aptly named for the move, although it was selected as season opener long before the relocation was official — finds time for humor, intrigue and warmth, even amidst its dire subject matter. It is, however, moving and affecting in that subtle way that any weighty drama should be: It makes us slowly realize the staggering implications of its subject, rather than simply talking to us about them. It’s deft, and handled capably by a sharp team led by director Melissa Hill Grande and scenic designer Gianni Downs.

A great way to open a great new space, then; if you have even a passing interest in Pittsburgh theater, go out this weekend. It will likely be the first of many visits. Can’t make it this time? Head to insideoffthewall.com for previews of the rest of the season; the Pittsburgh premiere of Rajiv Joseph’s Gruesome Playground Injuries, called “darkly humorous” by the Daily News, comes in mid-December.