Think Outside the Penalty Box

Get moving this summer with these awesome and unusual sports—because who doesn’t want to learn how to sword fight? 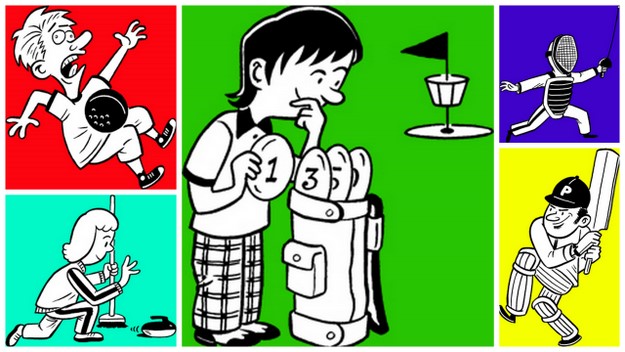 Pittsburghers love their sports, but these days, you don’t have to pitch or tackle to enjoy a good game. Local athletes can dabble in all kinds of sports that involve bats, balls, polished rocks—and even sabers. Here is a sample of some of the lesser known sports Pittsburgh has to offer.

The rules are easy: You take a plastic disc, which looks halfway between a Frisbee and a discus, and you toss it into a metal basket. But mastering the right flick of the wrist can take years. Disc golf (or “frolf”) uses the same terms as regular golf—like “hole,” “par” and “birdie”—but disc golf is free, open to anyone and is played mostly by young, bearded dudes. Pittsburgh has an abundance of courses—from Schenley Park to North Park and Deer Lakes. Most players enjoy disc golf for its relaxed camaraderie, but if you start acing holes, you can join leagues and compete in open competition, thanks to the Pittsburgh Flying Disc Society. pfds.org

For years, curling has been somewhat of a joke. What kind of goofball plays a sport involving brooms, a heavy stone and an ice rink? It turns out that a lot of goofballs do: The Pittsburgh Curling Club is so popular that its summer session, dubbed “TropiCurl,” is completely booked, and the waitlist is extensive. This good-humored bunch offers regular curling lessons and practice, but die-hard curlers may also compete with teams in other cities. Sponsors can support this nonprofit club by buying a T-shirt or having their name engraved on a “rock handle.” pittsburghcurlingclub.com

Cricket is played all over the world, and it looks a heck of a lot like baseball, but it’s almost unheard of in the United States. Astonishingly, Shailesh Bokil discovered that Pittsburgh had a cricket club in 1883. He and his cohort started the Pittsburgh Cricket Association in 2004, and, in keeping with tradition, the organization reinstated the club’s original charter and updated the registration for the state records. “The games are pretty serious,” says Bokil, the association’s president and treasurer. There are weekly practices for rookies, but the real events are the round-robin games that are played by 15 established teams. pittsburghcricket.com

There is hardly a person in the world who hasn’t, at some point, yearned to swordfight. If you’re daring, you can find a rapier and challenge a roustabout to a duel. But for a safer pastime, join the Three Rivers Fencing Center, a club based in Point Breeze. Novice fencers can study foil, epee and saber, and all equipment is provided. Students of all ages can learn parries and lunges from Iana Dakova, the former national champion of Bulgaria.
While fencing is a more expensive sport than, say, rollerblading, the all-inclusive classes are a real bargain. And ambitious students can compete for medals and ratings in regional tournaments. Touché! trfc.typepad.com

No gym class would be complete without a dodgeball session. Yet adults rarely have the chance to whip rubber balls at scrambling opponents—until recently. Thanks to the Pittsburgh Urban Magnet Project (and maybe some inspiration from Vince Vaughn et al), fast-ducking athletes can enroll in summer dodgeball at the North Side YMCA every Wednesday evening. But be warned: These aren’t casual pickup games. Dodgeballers must register, join a division and sign a waiver—not that dodgeball is dangerous, per se, but PUMP likes commitment. pump.org

This article appears in the July 2011 issue of Pittsburgh Magazine.
Categories: Top Doctors