Make a date with a carnivorous plant, hear a live stand-up album recording and celebrate the 100th anniversary of the Negro Leagues this weekend. 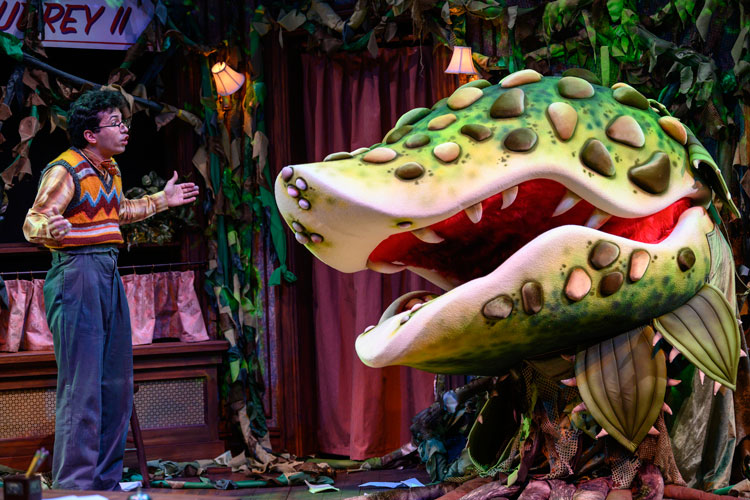 The Best Reason to Leave Your House This Weekend
Little Shop of Horrors
Through Feb. 23
O’Reilly Theater

Anytime you have an opportunity to watch a puppet eat a living human, you should seize it.

In this case, the puppet is the famous carnivorous plant Audrey II, brought to life in Pittsburgh Public Theater’s production of “Little Shop of Horrors.” The tale — first a 1960 film comedy, then a 1982 off-Broadway musical, then a 1986 film adaptation of the stage version — concerns Seymour (Philippe Arroyo), a hapless flower-shop employee who unwittingly cultivates the hungry plant. His newfound fame is complicated by the need to feed people to his leafy ward; the tale, told through appealing ’50s-style doo-wop numbers, is pleasantly silly with just a bit of gallows humor.

The plant is the main attraction, embodied here via puppetry by J. Alex Noble and voiced, in a dynamite performance, by Monteze Freeland. An innovative staging brings the audience even closer to the action in the already-intimate O’Reilly Theater, and Lauren Marcus, as the original Audrey — Seymour’s hard-luck love interest — shines, particularly during the ballad “Somewhere That’s Green,” the show’s high point.

In the first half of the 20th century, many of the best baseball players in the world suited up for Pittsburgh’s storied Negro League teams: the Homestead Grays and Pittsburgh Crawfords. While similar hotbeds of talent existed in New York, Kansas City and other markets, rosters featuring the likes of Josh Gibson, Satchel Paige, Cool Papa Bell, Judy Johnson, Buck Leonard and Oscar Charleston made western Pennsylvania unparalleled for sheer talent.

That history and its legacy will receive a spotlight this Thursday evening at the Sen. John Heinz History Center, as a panel discussion marks the 100th anniversary of the Negro Leagues. Experts on hand will include Pittsburgh Pirates great Al Oliver, Josh Gibson Foundation executive director Sean Gibson (the slugger’s great-grandson) and others. While you’re there, take a look at Paige’s glove, where some of the most feared pitches in the history of the game were born.

The Persad Center, an organization that aims to improve the well-being of the LGBTQ and HIV/AIDS communities, holds its Quarterly Queer Carnival. This flea market and food drive features vendors, artists and activities, and the cost to get in is a monetary donation or a shelf-stable item for the Persad Center Pantry.  A portion of the proceeds will benefit TransPride Pgh. — Jesseca Muslin

Stand-up comic Ricky Glore is the originator of the “Explain a Movie Plot Badly” Twitter account (example: “Maniac works two jobs” for “Flashdance”) and a favorite on the nationally syndicated Bob & Tom Show. He has not, however, yet recorded a stand-up album. He’ll correct that Saturday night, as he heads to Burning Bridges Comedy Club — the DIY club adjacent to Lawrenceville bar Hambone’s — to tape his debut record. Glore, a Cincinnati native, will perform two shows on Saturday, at 8 and 10 p.m.

Answers to The Most Frequently Asked Wedding-Planning Questions

How To Plan Your Wedding in No time, or By Taking Your Time

These Are the Cozy Colors You’ll See in 2021

Restaurants in Pennsylvania Will Be Allowed to Raise Indoor Occupancy Limits