They Love Us — They Really Love Us!

You can't surf the web for five minutes these days without running into some Pittsburgh praise. 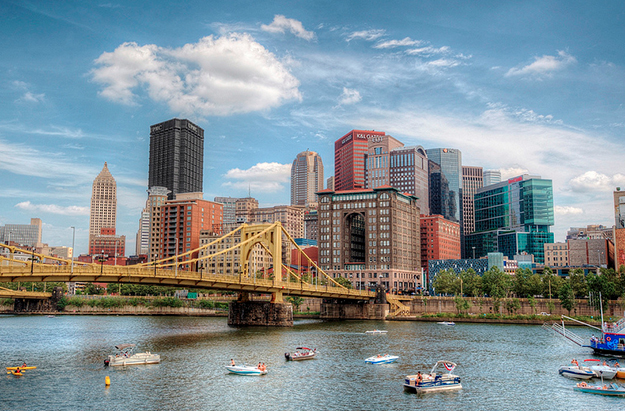 There's something special about praise from an outsider. Growing up, it was nice when your mother would catch you after a soccer game and say, "Great game, kiddo," but it was an entirely more satisfying feeling when a stranger walked up to you to say the same thing. Moms and dads, by the laws of the universe, have to tell us our art is the best even if they guessed our drawing of a boat to be a hippopotamus, so accolades from those closest to us have a diminished worth compared to those from outside our circle of life.

Much the same way, it's one thing for a local publication or blogger (ahem) to constantly praise Pittsburgh and to say that Pittsburgh's art is the best and museums are the best and so on. Thanks, Mom.

But here are some recent articles written about Pittsburgh by outsiders or former Burghers who are now outsiders. It's not just Mom who thinks we rock. Just try not to cringe every time an author talks about our dingy, dirty, smoky past.

— Starting with the expected "once known for its steel mills and smog," CNN Money goes on to describe just how close Pittsburgh is to truly becoming the new Hollywood in this online piece that reports 24 movies have been filmed in our city in the last three years alone. Pretty soon we're going to have our own paparazzi. I might be one of them.

—  A travel writer with Oswego County Today in New York chooses "dingy steel town" to describe our past and then reports on the amazing renaissance we've undergone. Her favorite places are the Senator John Heinz History Center and the Carnegie Museum of Natural History.

— GeekMom at Wired graciously makes no mention of smoke, soot, dinginess or smog, so I already like her. She geeks out over two of Pittsburgh's treasures, the Carnegie Science Center and the Children's Museum, calling it one of the best in the country. Also, does anyone else feel like they want to puke every time they go in the Gravity Room? Just me?

— In the Santa Barbara Independent, a former Pittsburgher now living in Portland calls us a former "rust-belt steel town" and then compares Pittsburgh's burgeoning bicycling scene to Portland's, naming us "The New Portland." As I like to say on occasion, "Suck it, Portland." While I'm waiting for him to mail me my bonus points for knowing the fourth river's name, I'm going to watch this video of bikers trying to make it up the steepest street in America and the second steepest street in the world, Canton Avenue:

Is it wrong I laughed at the guy at 1:00 who tried the zigzag move, and failed … slowly?

I know what you're thinking though. It doesn't look that steep, right?

Try it from this angle:

I'm having Gravity Room flashbacks. Somebody come hold my hair back.

This article appears in the September 2012 issue of PittGirl.
Categories: PittGirl