These Three Amazing Outdoor Spaces Will Inspire You

From a rural “entertainment barn” to a suburban oasis and an urban rooftop driving range, these innovative spaces have one thing in common — they’re all awesome. 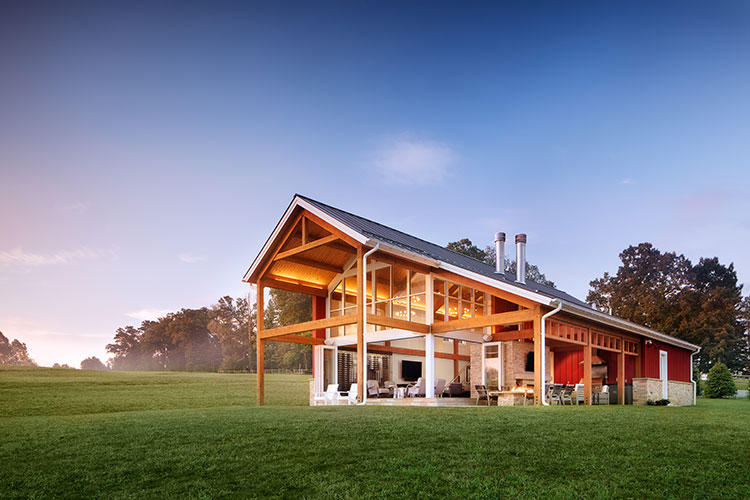 Ask any Pittsburgh native to describe a summer in southwest Pennsylvania and you’ll likely get some variation of partly cloudy, humid and, of course, short. Way. Too. Short.

The brevity makes an outdoor sanctuary a Pittsburgh imperative — you have to make the most out of the weather you’re dealt.

Three homeowners in the region certainly will be making the most of their summers. This trio of amazing and inspiring outdoor spaces—one rural, one urban and one suburban—are stocked with shrewd practicalities and innovative surprises, offering design inspiration and a bit of real estate envy. 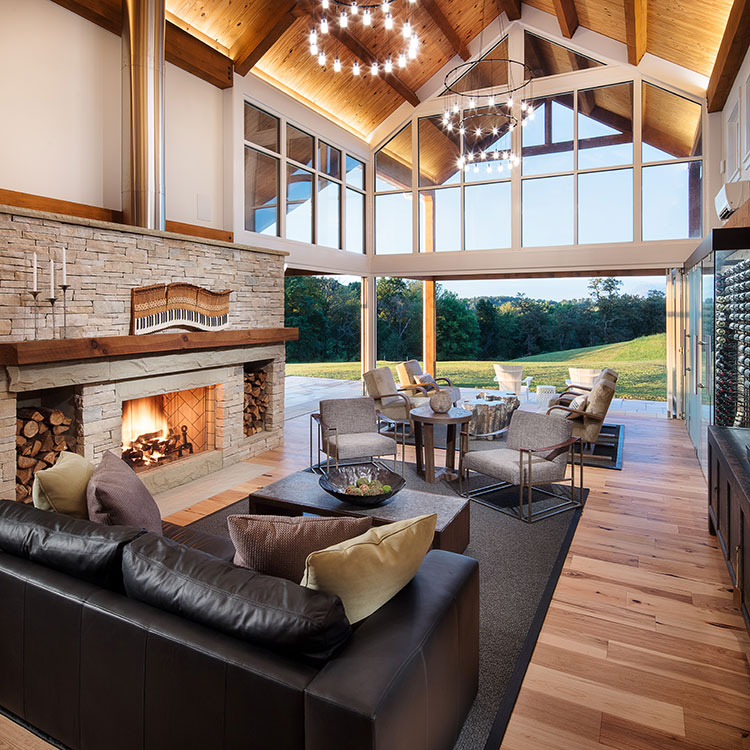 The homeowner’s bold plan to transform an existing, timber-frame barn into a luxurious Laurel Mountains getaway and entertainment space quickly fizzled, as best-laid plans so often do.

The century-old structure was falling apart and lacked a proper foundation. A renovation would have been difficult and costly and required compromises no one wanted to make. So the architects at DLA+ Architecture & Interior Design in Green Tree suggested a different route: Tear the barn down and start anew. 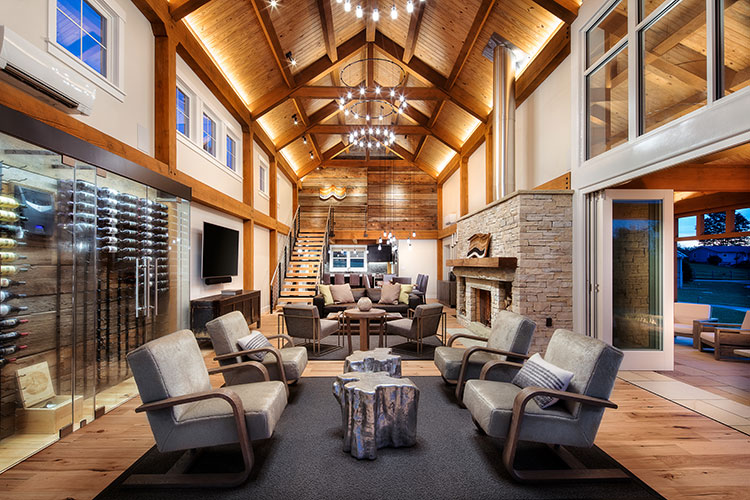 Though the resulting “entertainment barn,” as they call it, technically is new construction, it retains the character and silhouette of the original building. The frame was erected the old-fashioned way by an Amish construction crew using true mortise and tenon timber joints. The demolition team salvaged some of the original barn siding, which was repurposed as wooden slat walls in the new build.

“We really wanted to recall and honor the structure of the original barn,” says project architect Geoffrey Lester. 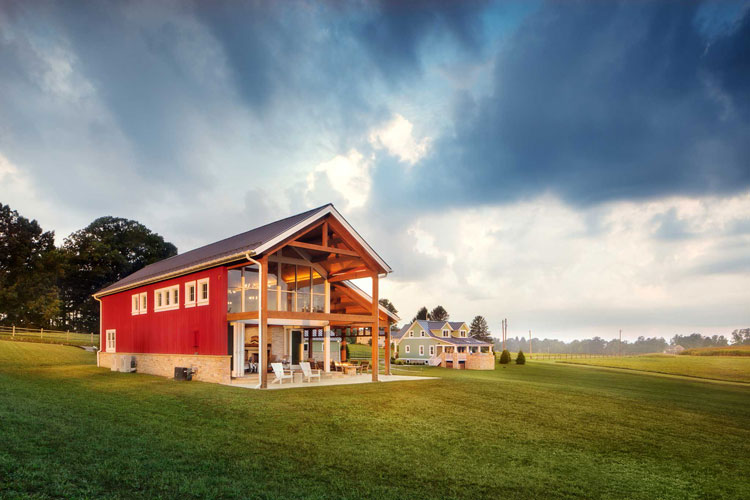 The result is 1,950 square feet of agrarian opulence housing two bedroom suites, an apron of hickory floors, an outdoor kitchen, a massive double-sided stone fireplace, an aquarium-style wine storage case and a system of folding glass doors that open to a flagstone patio and 16 acres of rolling countryside.

“It has both a rustic and an artistic feel to it,” says construction project manager Jim Roberts. 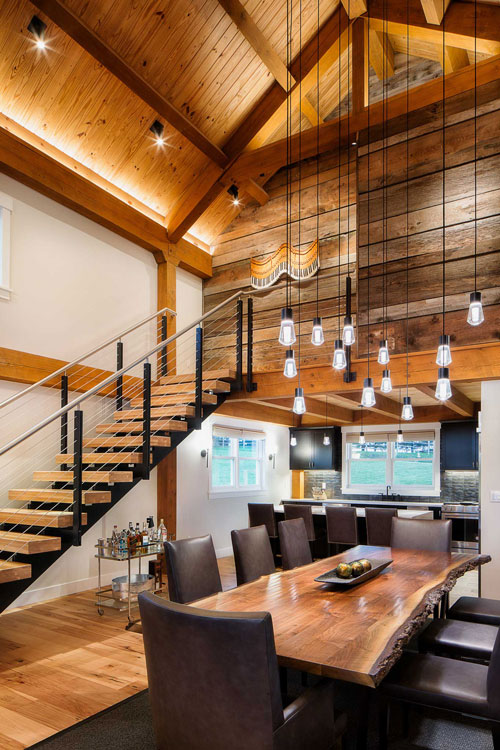 Of all the unique design touches Lester included, Roberts points to the staircase as his favorite. The cantilever-style treads rise from the main floor to the second-story guest suite and feature a metal-and-wire railing.

The barn is one of three buildings DLA+ renovated or constructed on the property, and it’s not the only lesson in contrast. In addition to the barn and a restored farmhouse, Lester and his team dismantled a corncrib chicken coop and reassembled the pieces to create a lavish outhouse (yes, that’s a thing) with running water.

“We completed all three buildings at about the same time,” Lester says. “We liked the idea that all of the pieces work together. It’s a true campus.” 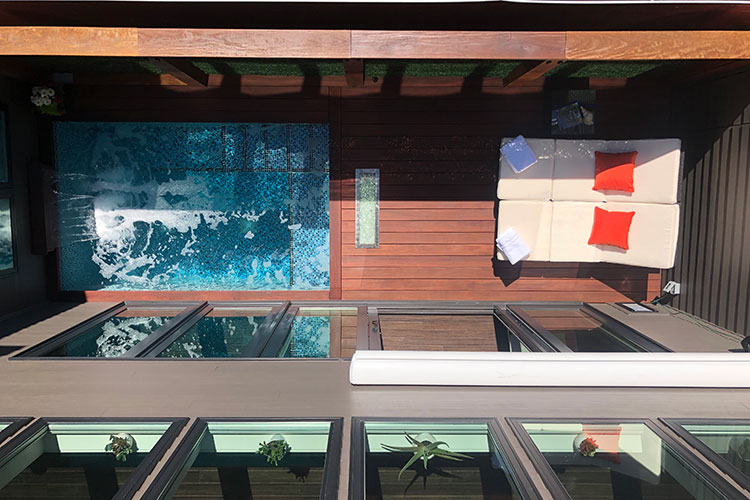 Architect Paul Eichler designs luxury homes for a living, the sprawling suburban kind where no expense is spared.

But when it came time to create his own space, Eichler, president of Archipello architecture design firm in Pittsburgh, tossed both the literal and proverbial blueprints out the window. His more than 3,400-square-foot, industrial-meets-residential new build in Lawrenceville, featuring an exterior of corrugated aluminum and cement board siding, rises for four stories and offers technological frills and outdoor amenities akin to a high-end hotel.

Plus, he did it all on a budget.

“I wanted to keep it timeless, and I didn’t want to overdesign,” Eichler says. “We’re in the city, but I didn’t want the ultra-modern feel; I wanted it to feel warm.”

The interior captures that feeling with wide windows, bamboo floors, a gourmet, eat-in kitchen and fun, techy gadgets, such as a color-changing water vapor fireplace.

“It looks like fire, but you can put your hand in it,” Eichler says. 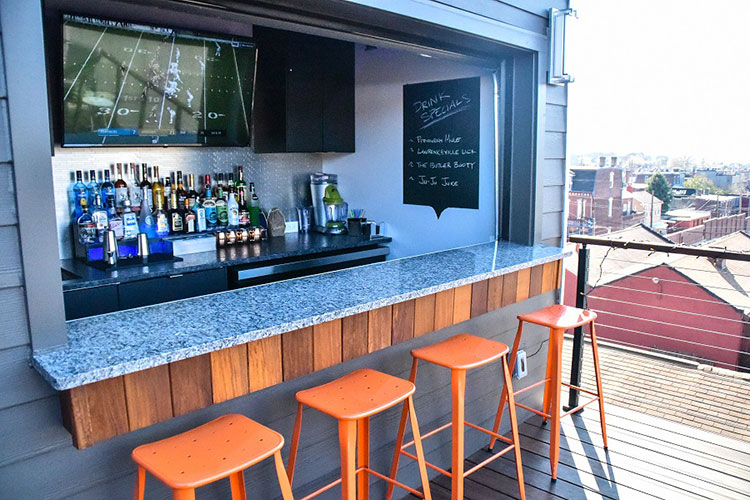 But the outside is the showstopper. Eichler carved strategically placed cutouts into the corrugated metal exterior to achieve maximum sunshine, privacy and party capacity.

The party starts at the top of the house — which you can reach via elevator — with a fully stocked rooftop bar and integrated sound system. The west-facing porch looks out over the city and gets full sun in the afternoon. 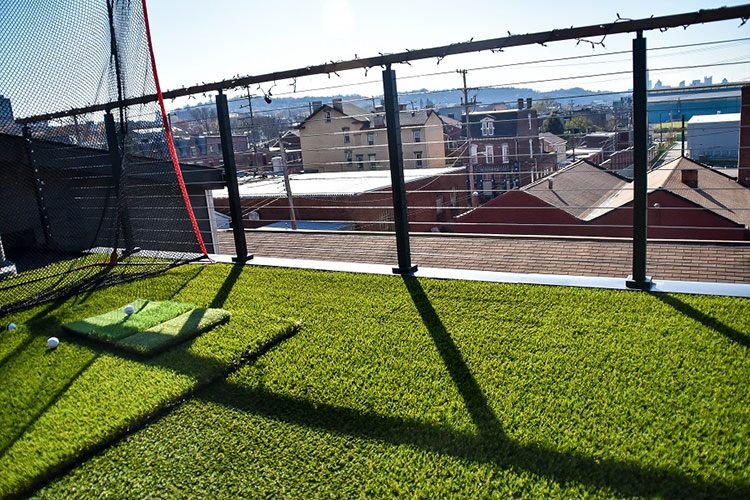 Following a house-warming party last year, Eichler added a sliding canvas cover to the area to cool things down when the weather is too sticky. The top level also features a sundeck, covered in grass, which serves as Eichler’s rooftop driving range. (Don’t worry, a net catches the golf balls before they can sail out over the neighborhood.)

The pièce de résistance, however, is the second-floor deck, which is home to a 3,500-gallon, heated, saltwater plunge pool. A faux boxwood wall makes the deck private and a prime spot for sunbathing, while a waterfall at the far end drowns out the sounds of urban life.

Though Eichler spent one year designing, and close to another year building, his dream house, he says it’s still not complete. He has flourishes he’d like to add this year, including a flush fire feature on the pool deck. 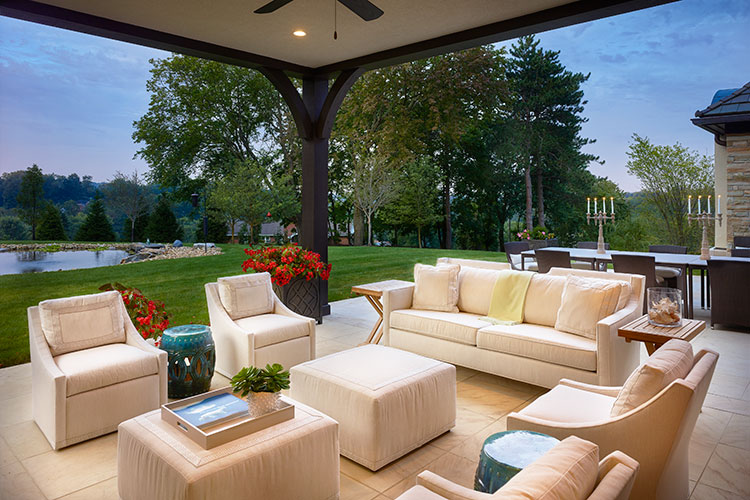 When LSM Interior Design owner Lisa Scalo McMenamin’s clients decided to build a home from the ground up in Pittsburgh’s South Hills, they immediately called to ask if she would be up for the task of designing it.

They were hoping for a floor plan that was a bit more open and a design scheme that was a bit less formal. McMenamin’s challenge was to incorporate the couple’s beloved, heirloom antiques.

She had three words for them: “Yes” and “French Country.”

The traditional, rustic style proved to be the perfect balance of effortless and elegant, as McMenamin situated their antiques in rooms with wood beams and soothing palettes.

“It almost looks like something you’d find in Aspen,” she says.

But then she had to find a way to take Aspen outside. 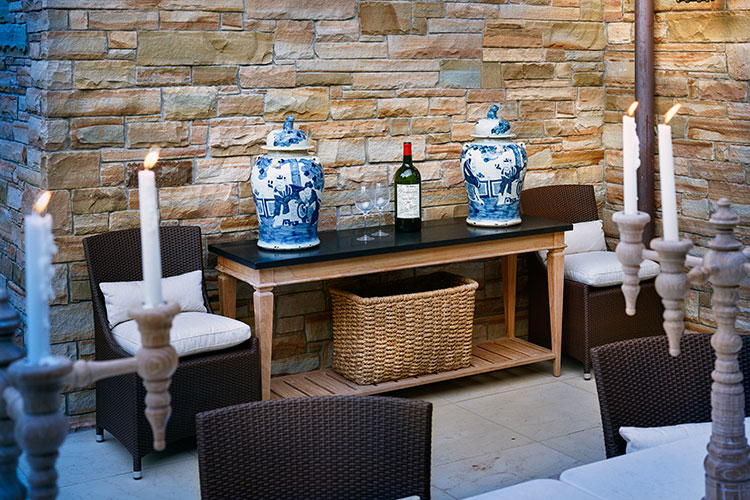 The home’s sprawling back patio — half under cover and half not — demanded hefty pieces to fill the physical space, but also needed clean, flowing lines to keep with the home’s sophisticated style.

So McMenamin went big. She covered a sofa, four chairs and two oversized ottomans in a creamy, outdoor fabric with a Greek key trim and flanked them with natural, teak side tables and 24-inch by 24-inch planters. Automatic screen shades hidden in the patio roof roll down to offer protection from the sun and add a bit of privacy for the homeowners. 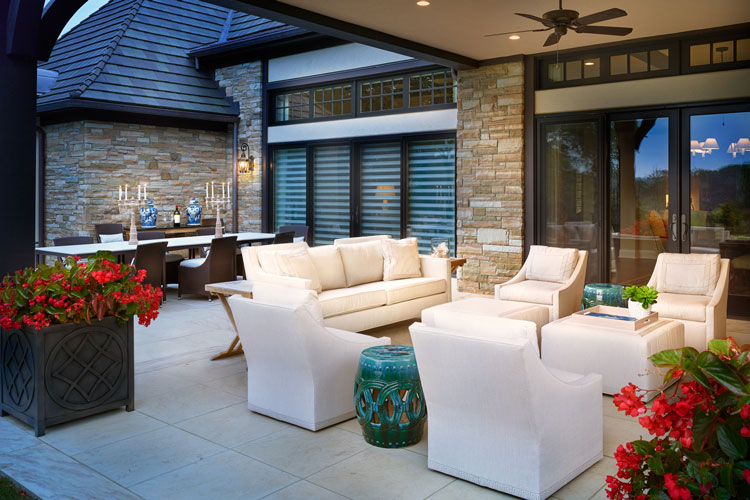 Three, 48-inch, limestone tables in the adjacent dining area offer full flexibility. They can be combined for outdoor dinner parties or separated for casual affairs. McMenamin also added a custom, black granite top to a teak buffet table that is able to withstand both wine stains and Pittsburgh winters.

A soaring outdoor fireplace matches the stonework inside the house while making the outdoor space useable on cool, fall nights as well as warm, summer days.

The view isn’t bad, either. The patio overlooks a lush lawn and pristine pond, which a fox and dozens of birds visit each morning.

“My goal was to take that level of comfort we created on the inside and bring it outside,” McMenamin says. “This house was just a dream to work on.”

This article appears in the June 2019 issue of Home & Garden.
Categories: From the Magazine, HOME + Design, Hot Reads