Find out why these couples ditched the traditional guestbook and instead chose a drum head, a giant wooden letter and a dictionary for their guests to sign. 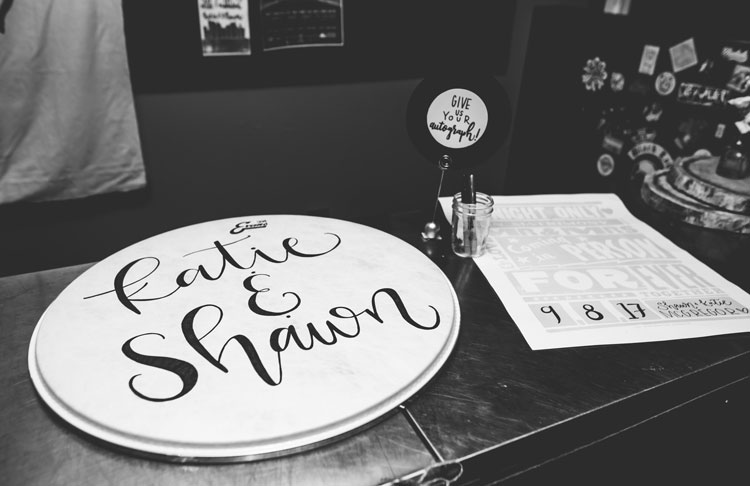 Before Katie Harbison got married herself, she was a bridesmaid in 13 weddings and a guest at even more. At most weddings, Katie noticed the guestbook was just a traditional, plain book that guests left a small note in as they signed.

When she talked to the couples, Katie says it seemed like they never looked at it again.

When it came time to plan her heavily DIY wedding to Shawn McGregor, they both felt it was a waste of money to go with the traditional guestbook. They wanted to find something special for them that coincided with their music theme. 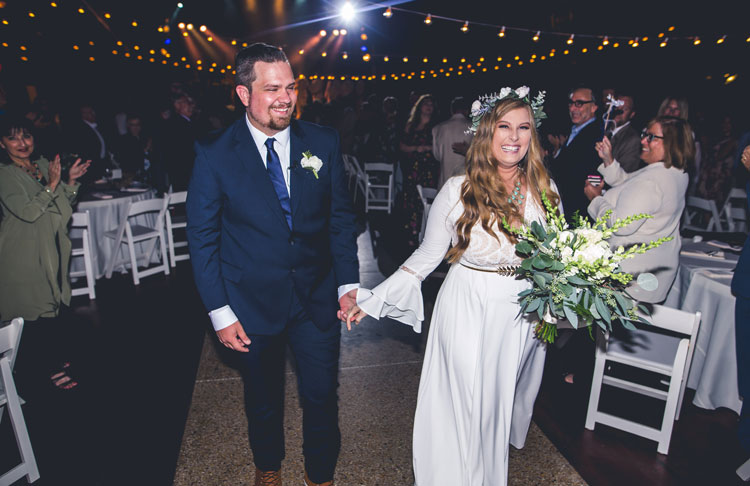 As part of the couple’s engagement photo shoot, Katie included a drum head with “Katie & Shawn” handwritten in the middle. They had the idea to use the drum head as their guestbook, but they worried that their guests would run out of space to sign. So, Katie searched for something else to use with it. She remembered touring Hatch Show Print with Shawn on a trip to Nashville; the shop prints concert posters for notable bands and artists such as Guns N’ Roses and Bon Iver. During their tour, Katie noticed they sold a poster that could be customized for weddings.

Katie looked through Hatch’s online shop and found one in blue that had spaces at the bottom to write the wedding date and the name of the couple. The poster matched the couple’s colors perfectly, and Katie quickly ordered it to use at their wedding.

On the day of their September wedding at Mr. Smalls Theater in Millvale, the couple set out their guest books together with a 45 record in the middle with a note that said, “Give us your autograph!” 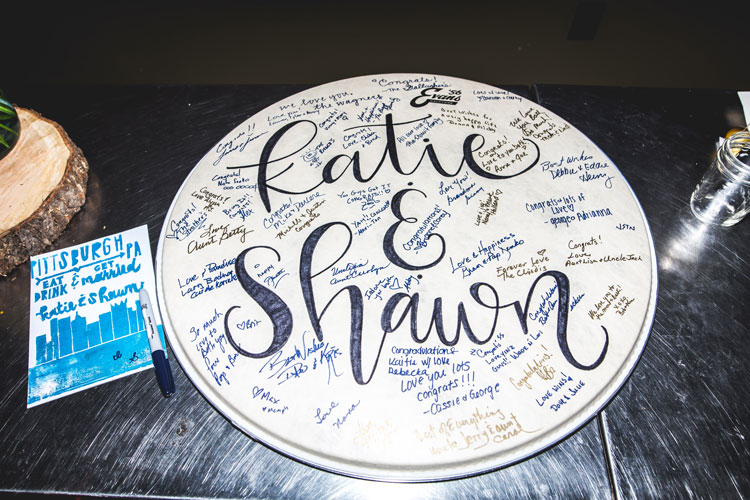 Katie says guests seemed apprehensive at first to sign the items, but by the end of the night, both were filled with notes to the newlyweds.

“It was awesome,” says Katie. “It looked like autographs on a concert poster.”

The drum head currently hangs in a room in the home alongside other drum heads Shawn has acquired through his career as a drummer in different bands, including The Commonheart. The poster hangs in another room on a wall with other musically influenced décor.

Even after seven months of marriage, Katie says, “We still have people talking about it.” 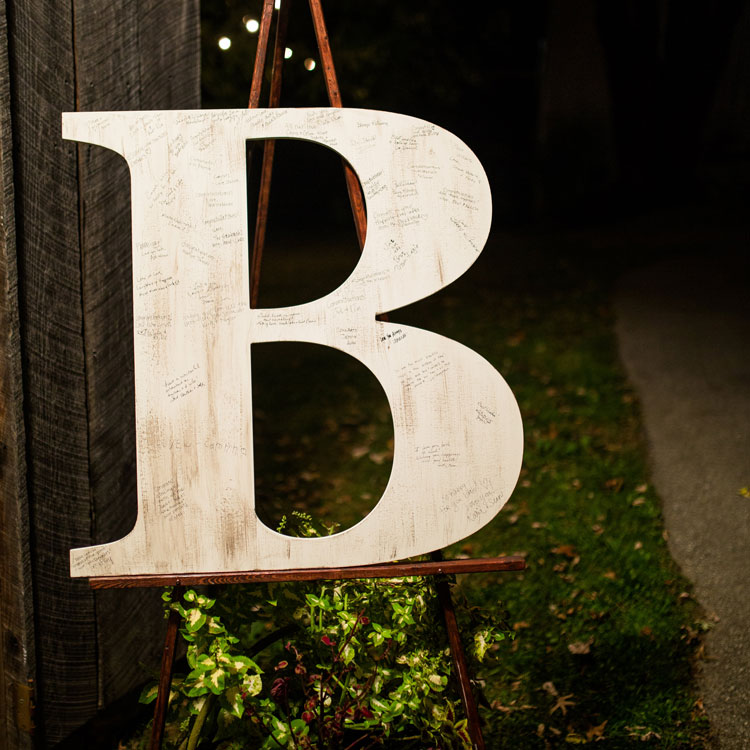 Lyndsay Petruny can’t remember exactly how she came across the idea for her nontraditional guestbook for her wedding to Justin Bersuder but says it was likely while browsing Pinterest or Etsy. But when she stumbled upon an Etsy shop based in Broken Arrow, Okla, called A Simple Place On Main that makes customized signs, she knew she found the perfect item.

Lyndsay and Justin ordered a custom-made, 30-inch wooden letter “B” that was a cottage cream color with espresso wash finish to go along with their rustic wedding theme. 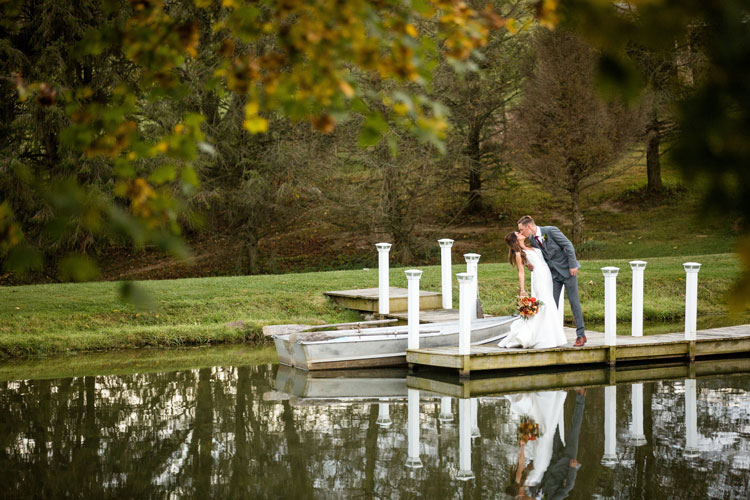 At their Oct. 7 wedding at Shady Elms Farm, the venue staff set the guestbook on an easel for guests to sign as they entered.

The couple recently moved into a new home and are still deciding where to hang their guestbook. They want it to be a focal point so they can see it often as a reminder of the love their family and friends showed on their special day.

“I’m really happy we decided to do it,” says Lyndsay. 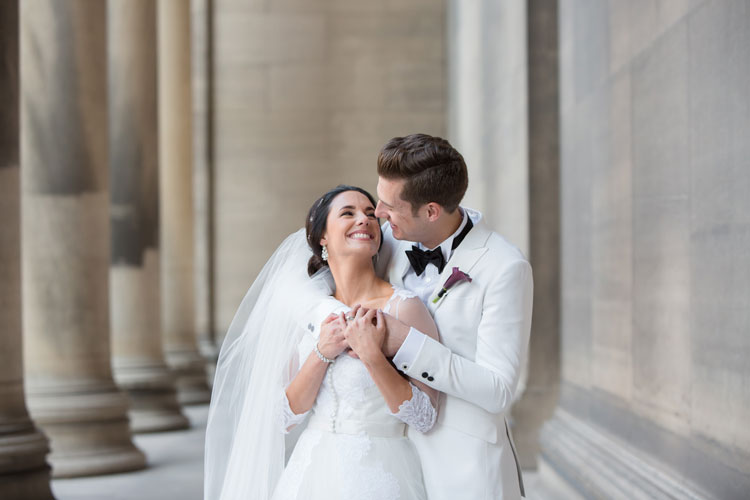 When Mallory Smitch and her fiancé, Mark Spirnak, were planning their wedding, they knew they wanted a festive atmosphere for their guests. To keep with that idea, the couple decided to include more interactive aspects with personal touches, which is how Mallory came up with the idea to use an old dictionary, a gift from her godfather, as the guestbook.

Malloy and Mark asked their guests to circle a word in the dictionary that reminded them of the couple and leave a message along with it. Mallory liked that guests could fill any down time during the wedding by searching through the book for the perfect word.

“I really liked the idea of people being able to leave us messages,” says Mallory. 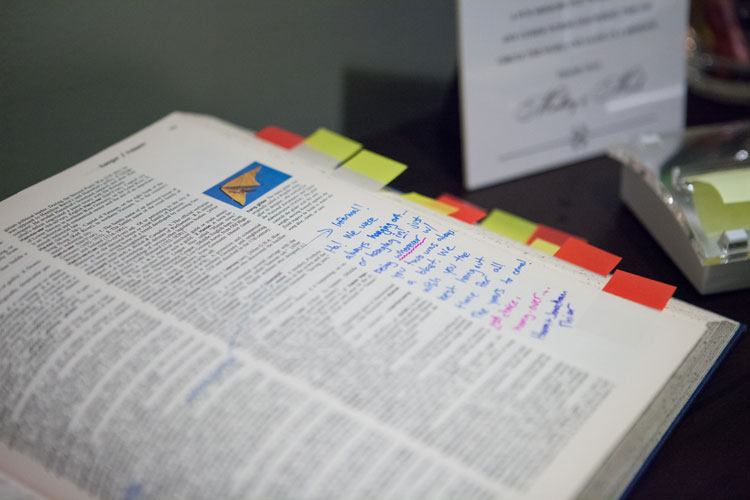 The most memorable message was left by the priest who married them on Oct. 13 at St. Paul’s Cathedral. Their priest baptized Mallory when she was young, and then transferred churches where he ended up as the priest at Mark’s church. Since they both had this connection with him, he was a special part of their day.

He circled the word “marriage,” and Mallory says he wrote a note with a touch of humor: “Without me, you two wouldn’t be married. God Bless.”

“That was really special to me too because he was a huge part of our day, and we loved him,” says Mallory. “I wasn’t expecting him to sign the book.”

Now, the couple displays their guest book dictionary on a bookshelf in their home — an easy spot for them to pick it up and look through the messages every so often. 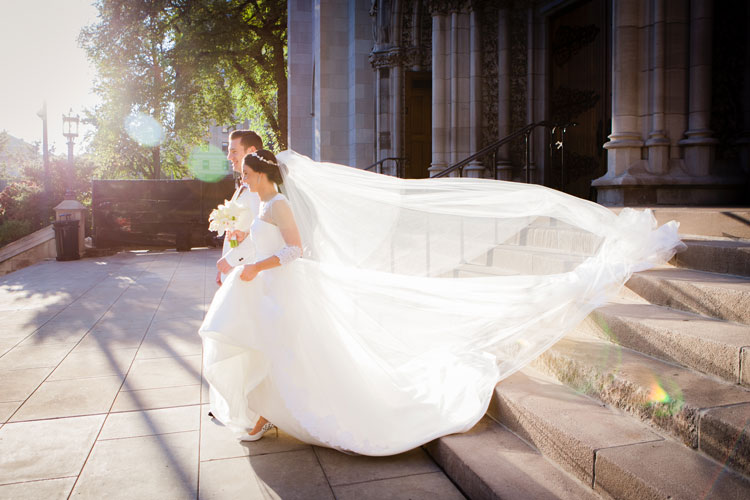