There's Only One Clown You Need to Worry About, and She's in the ScareHouse Basement

A review of the haunted spot's extreme sister attraction. 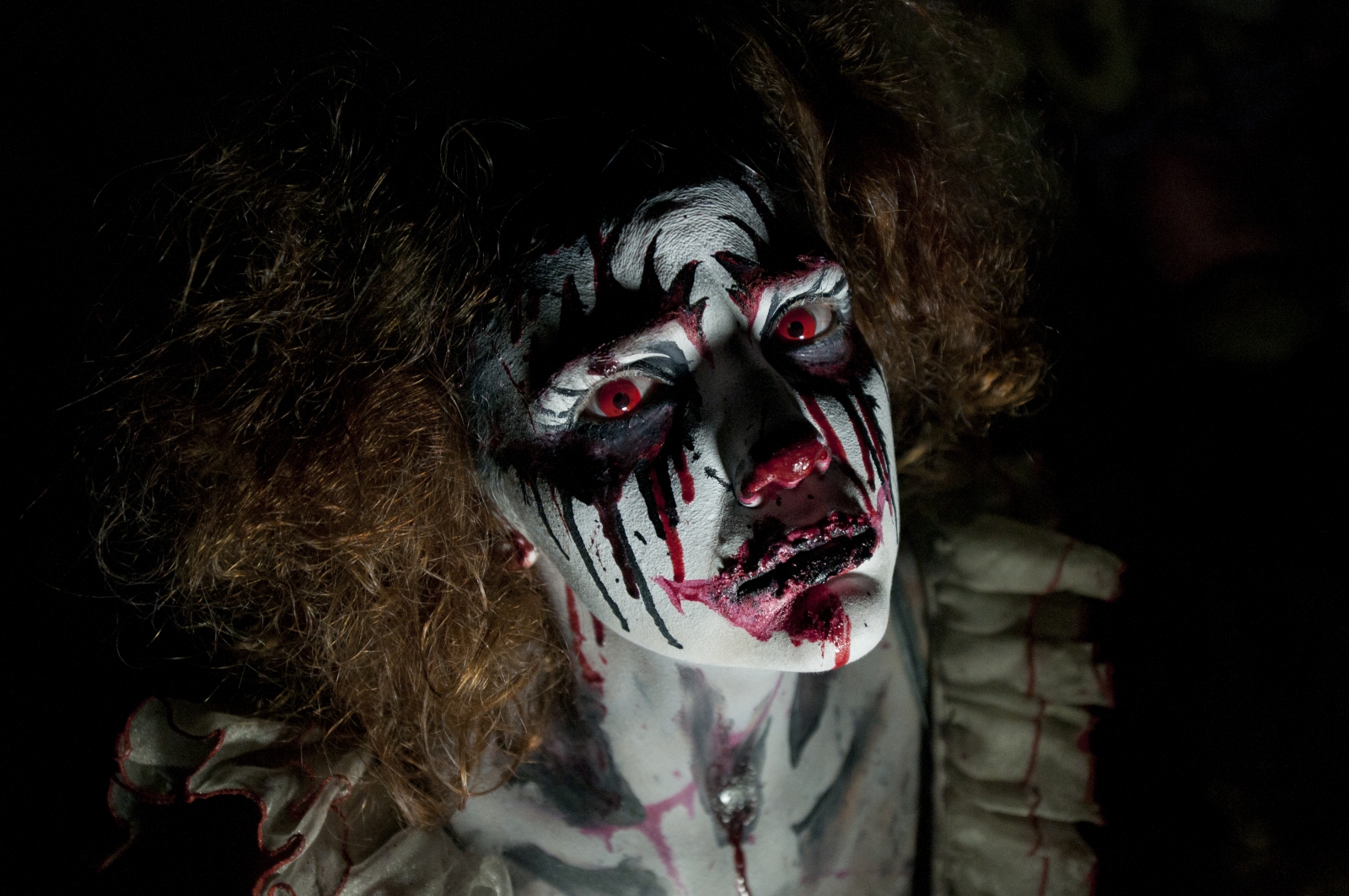 I am not afraid of clowns.

Never have been. Maybe it’s because I didn’t see the TV adaptation of Stephen King’s “It,” the source of many contemporary clown fears, until my 20s. Maybe it’s because I was exposed to the actual artform of theatrical clowning as a teenager, shaping my opinion of the clown as performer. Maybe my fears just run a little more towards traditional terrors.

Whatever the reason, I’m not afraid of grease-painted jokers. And in spite of the evil-clown hysteria currently sweeping the nation — probably a case of mistaken identity and false identification stemming from breathless media coverage, from where I’m sitting — I generally find the proliferation of creepy clowns in Halloween attractions to be an ineffective tactic.

I am, however, afraid of Happy the Clown.

That’s her, in the photo above. She appeared in the final room of the original ScareHouse basement in 2013. After 40 minutes of being bound, hooded, threatened, psychologically tormented and generally spooked, it was a diminutive harlequin who appeared in the attraction’s ultimate scene. And she was terrifying.

I left thoroughly shaken by Happy; something about her playful, manic intensity was utterly chilling. I can’t remember precisely what happened in that last room, but I remember the feeling it created: If I don’t do exactly what this tiny clown says — if I upset her in any way — she’s going to devour my soul, giggling while she does it. It’s all in the performance, I suppose; actress Bonnie Banner has an innate knowledge of how to take control and manipulate the emotional responses of her terrified guests.

So it was with a mix of trepidation and excitement that I learned that this year’s Basement attraction, the extreme sister production to the ScareHouse’s more traditional haunt, was called “Happy’s Birthday Party.” After that first-year experience, handing the reins to the scares over to Happy was a natural choice. But I knew it meant I was in for another thorough rattling.

To repeat some of what I reported the first time I reviewed the Basement: This is not an attraction for everyone. Pay careful attention to the waiver you’ll be asked to sign before embarking on your journey, because it is quite serious; everything it mentions (graphic scenes of simulated horror, sexual content, mild electric shocks, confined spaces and so forth) will absolutely happen. You’re always safe, and you have the option of bailing out at any point via a pre-discussed safe word; even with that knowledge, however, the intensity of the Basement outpaces what you’re likely expecting.

Even at that, though, I’m frequently asked what to expect down there — what should a guest be ready for? The short version: You should be comfortable with an abundance of physical contact with strangers, being roughly pushed around and exposed to things you’d rather not touch. You’ll be restrained and blindfolded. The content does tend towards the sexual; without getting into spoilers, the Basement likes to play with the close mental relationship between sexuality and fear.

While those caveats absolutely should discourage those not up for such an experience, don’t let them imply that the Basement isn’t fun. It is. It is unpredictable, bizarre and often quite funny. It’s an immersive theater experience unlike any other, like living through a particularly disjointed horror film. And you’ll absolutely feel exhilaration and accomplishment on emerging.

So what goes on at Happy’s Birthday Party? I never like to specifically spoil anything that happens in the Basement, so I’ll speak generally. This year’s experience has much more in common with the first Basement — a lot of raw, aggressive terror — than the past two installments, which tended more towards the uncanny and theatrical. I’ll admit a slight preference for the latter (I’m always eager to find the story behind the scares), but there are a number of scenes in the latest version that are absolutely perfect.

The best, of course, are the moments leading up to Happy’s appearance. She’s got a compatriot this year, in the form of Trixie, a slightly less manic but still fully terrifying clown-pal; Trixie is played by fellow Basement veteran Jennifer Dallas and sets guests up perfectly for the whirlwind arrival of Happy moments later. Much like Banner, Dallas is a charismatic force of nature; she emerges from the darkness as a potential ally before slicing through your trust with surgical precision. Watching Happy and Trixie vie for control while you play the powerless onlooker is by turns captivating, hilarious and horrifying, and it’s one of the best sequences the ScareHouse has ever cooked up. (There is also a twist ending that’ll be particularly effective for longtime ScareHouse fans.)

Those up for an intense ordeal should absolutely make plans to venture down to the Basement this year. (Buy tickets now — nights are already beginning to fill up, and Halloween approaches.) For those too timid to try it, I should note that the main attraction is perhaps the best I’ve seen from the ScareHouse; its concluding chapter, “Infernal,” is absolutely brilliant — one of my favorite chapters of a Halloween attraction ever.

Now if you’ll excuse me, I’m going to go make sure Happy isn’t hiding in the back seat of my car. I wouldn’t put it past her.