There’s a Bar in Cranberry Going Through an Identity Crisis

Pig Iron Public House has a ton of great beer, some pretty good food and an unfortunate theme. 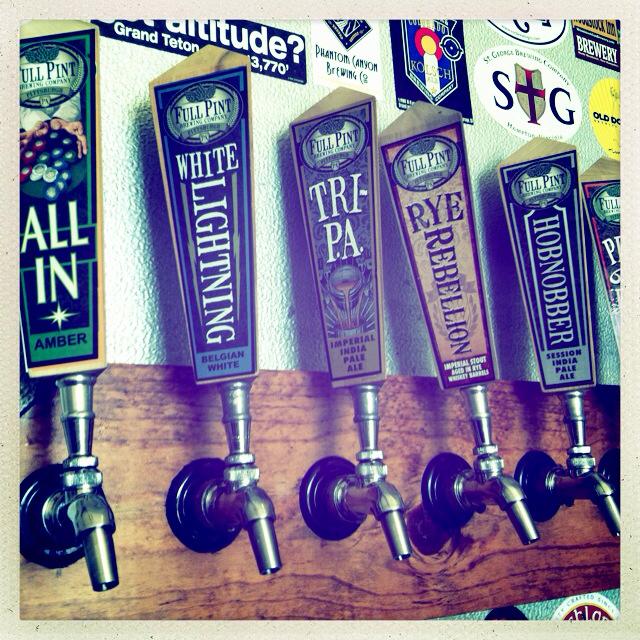 While many fine places to eat and drink have opened in the city’s northern suburbs, Pig Iron Public House, which opened in late October in Cranberry, almost certainly boasts the best draft beer list north of the Point. An impressive 66 craft brews are on tap at any given time, tilting on IPAs and dark brews.

Plenty of locally-made creations are available; on my visit, a Full Pint Brewing tap takeover was underway, with eight offerings from the North Versailles brewery ready to try. I also spotted fine choices from North Country Brewing Company, Spoonwood Brewing Company, East End Brewing Company, Draai Laag and more, as well as options from some of my favorite craft purveyors nationwide.

They offer eight spins on the Moscow Mule — I tried the orange, which was quite good — as well as seven signature cocktails and a quintet of beer cocktails. The focus of the cocktail list is decidedly on refreshment and sweetness (a selection of juice-based concoctions is also available). Many of Pig Iron’s creations utilize locally-distilled spirits; Wigle Whiskey, Maggie’s Farm and Boyd and Blair are all represented.

I devoured a plate of white buffalo dip myself and considered ordering more; there are plenty of filling favorites represented on Pig Iron’s menu, from nachos with chorizo to a beer-cheese macaroni dish to pierogies with Brussels sprouts. I was more surprised, though, to find a number of less-conventional options as well: an apple and heirloom-tomato spinach salad. Roasted carrot and sweet potato bisque. A fruit panini on raisin bread. Ragout. (Ragout!)

And therein lies the confusing — almost bewildering — thing about Pig Iron Public House. This place is fancy. Not white-tablecloth fancy, but for a pub in the ’burbs? Fancy. They have juice cocktails. They have refined, French-Canadian beer on tap. They put Brussels sprouts in the macaroni and cheese. They offer more than one champagne-based mixed drink.

Yet: Go to their website. Pig Iron Public House adopts a hard-working, just-off-my-shift-at-the-mill theme throughout. Your check will be called an “Invoice,” and the deliberately sparse decor around the joint seems designed to invoke a shop floor. Images of blue-collar laborers adorn the bathroom doors.

You know — blue-collar types who enjoy unwinding with a few vanilla-jalapeño juice cocktails before wolfing down some sweet potato bisque.

Let me be clear about this. I have no problem with working-class bars; I love beer-and-a-shot joints. This is not that kind of place. And I have no problem with any of the offerings I mentioned above; on the contrary, I love seeing them at a restaurant that would be perfectly justified in sticking with burgers and wings. The food and drink at Pig Iron Public House is quite good.

It’s just a head-scratcher — why offer refined cocktails and grub and play-act at some sort of steel-hewn authenticity? It’s bizarre. It doesn’t make the food taste any worse, nor does it make the drinks any less refreshing (and boozy, by the way).

But it does almost seem in poor taste to throw photos of mill workers on the wall and then charge $13 for a Moscow Mule. And I probably wouldn’t have noticed the disconnect if it weren’t for a stupid tendency for the menu to invoke the concept of “manliness” in some of its descriptions: There’s a section labeled “sandwiches,” then another section groan-inducingly labeled “working manswiches.” I guess the regular sandwiches are just for women and the unemployed, then? (And while we’re at it, champagne and stout is not a “Man-Mosa,” it is a Black Velvet. And there was nothing wrong with the original name. There is plenty wrong with the name “Man-Mosa.”)

One more time: The food’s good, and the drinks are good. It’s a little overpriced, but who cares. All of this other stuff just kind of rubs me the wrong way. If you’re trying to open a new restaurant, why risk putting people off? Be who you are and call it a day.