There Will Be Blood

As the NHL lockout enters its final, desperate and depressing stage, the suits should remember the fate of the Steel City. 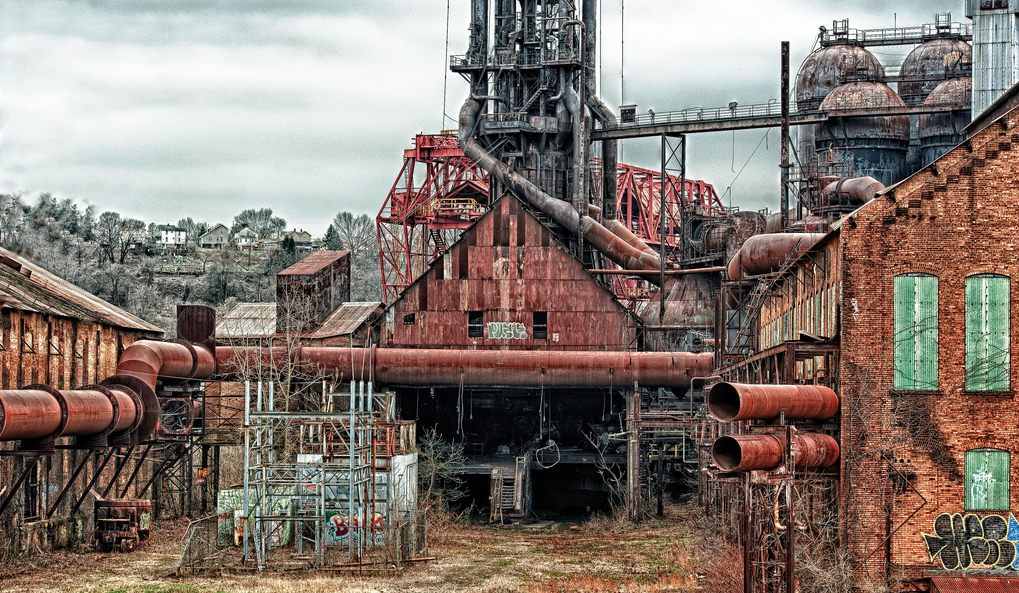 Photo of the former Carrie Furnace in Homestead by Dave DiCello

We used to make things in this country. In 1957, the United States produced more than one-third of the world’s steel. Many millions of tons were made right here in Pittsburgh. So much of it, in fact, that the mill chimneys puffed black smoke into the air and it was nighttime, almost all the time, forever.

Then in 1959, there was a major labor strike. For four months, 85-percent of steel production in the U.S. was shut down. The United Steelworkers of America wanted better wages, and the mill owners thought it would drive costs too high. Sound familiar? Since these are bitter, polarized, flame-baiting times (in The Year of Our Perpetual Rage Boner), I’ll let you fill in the empty spaces about which entrenched ideology was to blame for the extended strike. None of that comment-section nitroglycerine really matters. The point is that both the steel bosses and the union bosses underestimated one thing: the threat of competition.

As the farcical dog and pony show of the NHL Lockout Redux lurches into mid-December, the suits who are ultimately pulling the strings, namely NHL commissioner Gary Bettman and NHL Players’ Association executive director Donald Fehr, continue to saunter up to media podiums for yet another round of snipey rhetoric and ideological diarrhea.

As we approach the edge of the cliff this week, Bettman and Fehr seem totally prepared to saddle up and ride a tandem nuclear warhead into the abyss Dr. Strangelove-style.

They’re playing the oldest political game in the book.

It's a phrase that's been uttered in Washington for decades.

It’s why Wall Street is endlessly corruptible. It’s why Congress is a middle school cafeteria. It’s part of the reason why the American steel industry collapsed. And it’s why sports fans have endured lockouts in three of the four major sports in the past two years.

When this gross, unpredictable and incredibly costly lockout ends, Bettman and Fehr will each claim victory, inevitably spinning that they’ve stomached immense losses for a greater good. But best of all, they’ll both be obscenely rich. Bettman will soon retire, vilified and Photoshopped in effigy by NHL fans, but undeniably rich. Fehr will crawl back into his feral lawyerly bunker, loathed by many players for telling them to hold out for more when it looked like the owners were about to buckle, but undeniably rich all the same.

When the 1959 steel strike finally came to an end, after federal intervention from President Eisenhower, the steel workers got a 7-cent an hour pay raise and better benefits, and the steel tycoons were still exactly as they were before — lecherously, insanely, immovably wealthy. Even in that pre-cable-news-gongshow world, both sides spun their narrative of moral victory in the newspapers.

Sure, the strike of 1959 is just one piece of the complicated and possibly inevitable decline of the American industrial monopoly. But what’s indisputable is that it opened the door for foreign competition.

When the smelters began smouldering and the black nimbus clouds of smoke once again hung over the city of Pittsburgh, it seemed like all was well with the world. But it was already over. Japanese, Chinese and Eastern European steel had already begun to flood American and foreign markets.

Today, China produces 44-percent of the world’s steel, six-times the tonnage produced by the US.

But by the time anyone noticed that the US steel industry was losing its grip, the suits who had argued for months over lavish continental breakfasts were long gone. Rich and gone.

As the weather turns colder and the NHL’s top stars are still languishing in foreign leagues and community ice rinks, Bettman and Fehr would do well to remember the long game. In the long-tail Web World of Sports, there are more options for a 12-year-old kid than ever before. He can live-stream a soccer game from England, or YouTube MMA videos, or pick up a lacrosse stick.

In the early ’90s, after the Penguins won back-to-back Stanley Cups, there was a hockey boom in Pittsburgh. Kids wanted to emulate their heroes. They built nets out of PVC piping in their driveways, asked for ice skates for Christmas and passed around dubbed VHS tapes of Lemieux and Gretzky highlights. Soon, hockey rinks were going up everywhere. Within a decade, some of those kids — Ryan Malone, R.J. Umberger, George Parros and Dylan Reese, to name a few — did what was once thought of as impossible and put on NHL sweaters. A lot more of the kids of that golden generation became NHL season ticket holders.

Los Angeles won two championships in the past year. The Kings won the Stanley Cup, led by an incredible, young, American-born goaltender and a secretly charismatic Slovenian superstar. During their Cup run, they played hockey the way it was meant to be played. They threw their bodies in front of slapshots, lost teeth, passed the puck seemingly by telekinesis, and played some of the best team hockey you’ll ever see.

It was the NHL's wildest dream come true. A major market team full of likeable personalities wins the Cup.

How many potential hockey nuts are growing up in LA at the moment, asking their parents why there’s still not a Kings game on tonight?

That’s if their attention spans even hold up. Because another LA team just hoisted some silverware. Last week, the LA Galaxy won the MLS Cup, their second title in two years. And if hockey fans are bigoted enough to believe that the namby-pamby MLS, with its stubbed toes and flailing Frenchmen, isn’t a serious threat to the hearts and minds of 12-year-old kids, think again.

If videogame sales are a leading indicator, soccer has already overtaken hockey. For the past four years, the FIFA series has outsold the NHL series on every videogame platform in the U.S. The MLS and top European leagues are not just aired live on ESPN, but this year the English Premier League also started to air on Fox directly after NFL games.

How many American kids watched the dramatic MLS Cup Final, then went outside and started juggling a futbol in the backyard when they could’ve been firing pucks at the garage door? For a lot of them, Dustin Brown’s toothless grin is fading with each overheard news report about the boring minutiae of the labor stalemate.

Let’s not forget the parents, the ones who are already inundated every day by Google alerts linking traumatic brain injury with the sport that their kids are begging them to spend $4,000-plus per year to let them play.

The narrative all along was that another extended lockout wouldn’t kill off the NHL in the long run, because the diehard fans would always be around. But with the arrogance that Bettman and Fehr have shown in their months-long farcical grandstand, in their days and days and days of non-meetings and continental breakfasts and bullshit-lacquered corporatized robo-speak, hockey's integrity (arguably its most marketable asset) has been irreparably damaged.

According to a new poll by NRG Research Group and Peak Communications, a staggering 58 percent of Canadians don't care if the lockout is settled.

Whenever this ends — tomorrow, next year — who wants to buy a $150 jersey? An $8 hot dog? Better yet, who wants to pay a tax to fund a new arena? Are we still in on the joke?

The suits, they’ll be gone and rich. Us, the fans, the parents who drive through the white night to hockey tournaments in the frozen meatlockers of North America, the kids who set their cell phone alarms to “O’ Canada” to get up for 6 a.m. practices, and the millions of niche weirdos who want to believe that hockey is something different — something more than just a bunch of overgrown, mulleted kids knocking around a piece of rubber, lorded over by a cohort of dot-com zillionaires and finanical grey-market profiteers eating incomprehensible seafood in luxury boxes, well … we’ll always be here, won’t we?