There is a Light: Signs of Hope in the Tree of Life Tragedy

In the midst of a tragic weekend, some Pittsburghers chose to funnel their grief into action — moments that may seem small on a grand scale, but helped to hold the city’s foundation together.

The massacre at Tree of Life synagogue in Squirrel Hill on Saturday brought a cloud of darkness over Pittsburgh — but groups of brave, deep-hearted individuals are providing rays of light.

While seeing these moments of hope doesn’t lessen the gravity of the pain pulsing through the city, it does provide a stepping stone to healing, a new lens to look through — to see the ones who, in the face of suffering, show up with a smile, a thank-you and pizzas to share. Here are just a few examples of the love we found in Pittsburgh this weekend.

Snack suppliers at the scene

It was the first responders, police officers and SWAT teams who confronted the alleged gunman and prevented the massacre from claiming an even greater mortality rate, according to FBI Pittsburgh Special Agent in Charge Bob Jones. Their heroic acts were not invisible in the Squirrel Hill community, where residents (including this grandmother and her grandchildren) brought donuts and other snacks to officials at the synagogue.

An amazing gesture by PICU nurses from Boston Medical Center (@The_BMC) this morning. They sent pastries to the UPMC Presbyterian emergency department staff with the below message. Thank you! pic.twitter.com/8UCa2c1wjn

The scene was similar in hospitals where several wounded at the shooting are still undergoing treatment. A mother and her son delivered pizzas to the emergency teams at UPMC Presbyterian in Oakland on Saturday night, saying “this is from the whole neighborhood to say thank you.” The next morning, the same teams received pastries from nurses at the Boston Medical Center in Massachusetts, who said “we stand with you, UPMC Presbyterian. Stay strong.”

An outpouring of interfaith support

While the shooting was an act of division, Pittsburgh’s response to the tragedy was overwhelmingly one of love and support across faith backgrounds. Just hours after the tragedy, students at Allderdice High School in Squirrel Hill organized a vigil with the help of Sixth Presbyterian Church, Dor Hadash and the Jewish Community Center that drew thousands of people to flood Murray and Forbes avenues, where they sang Jewish songs of healing.

“It’s right to be angry,” a student organizer said. “But it’s also important to comfort one another.”

“Muslims Unite for Pittsburgh Synagogue,” a local fundraiser started by two Muslim groups, has already collected more than $180,000 dollars for Tree of Life victims. Northway Christian Community held a prayer vigil Monday night for community members to lament and pray for victims; the event filled the room at its Oakland campus.

The floral arrangements accompanying each memorial at Tree of Life are the product of Ronna Wedner Levin — a florist who’s run the Squirrel Hill Flower Shop for the past 40 years and has been a member of the Tree of Life congregation her entire life. Levin channeled her grief this weekend into elegant, thoughtful arrangements to grace the memorials of those she’s known and worshiped beside for years. 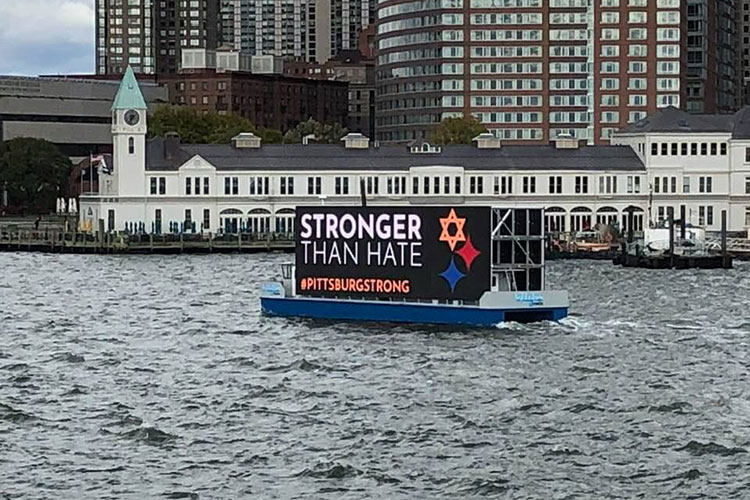 We are not alone

There have been expressions of support from cities across the country and countries around the world. One example is this picture taken at Battery Park in Manhattan on Monday morning.