Uniontown native David Nehls’ The Great American Trailer Park Musical rolls into his hometown at the State Theatre Center for the Performing Arts. 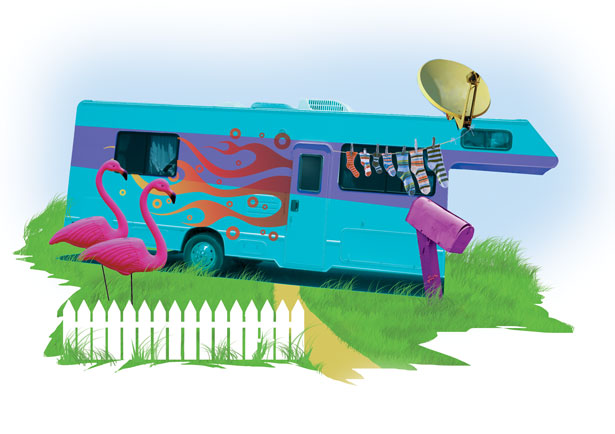 When David Nehls was a young paperboy living in Uniontown, his favorite stop was the local trailer park. “It wasn’t really a trailer park—it was more of a court behind the football field,” he recalls. “I don’t want to call them ‘lower income,’ because they were the coolest people ever.” The locals would invite him inside, offer him snacks, tell him stories and ask about his life. While some in America mocked and ignored the mobile-home community, Nehls started to study its offbeat characters. Little did these folks know that, in 2005, Nehls’ The Great American Trailer Park Musical would grace the stages of New York. What started as a fanciful idea evolved into a cabaret-revue and then into a full-fledged musical.

Now 43, Nehls has made a name for himself as a composer (contributing music to the musicals It’s a Wonderful Life, The Watercoolers and Fishwrap) and as a musical director (directing regional productions of The Full Monty and Hedwig and the Angry Inch). Music has always been Nehls’ driving motivation; when he graduated from Laurel Highlands High School in 1982, he had studied piano for 10 years with his instructor, Irene Hoak. He was accepted to Shenandoah Conservatory, an arts college near Washington, D.C., where he wrote his first musical, Starting Another Day. The show hit pay dirt, receiving a special gala performance at the Kennedy Center in 1987. He left Shenandoah to pursue acting in Washington, D.C., for three years and then was on the road for 10 years with shows such as Me and My Girl, City of Angels, Little Shop of Horrors and in Europe in The Rocky Horror Picture Show.

But Trailer Park seems to be his biggest and most personal achievement to date. After premiering at the New York Musical Theatre Festival in 2004, the show has blossomed like an oversized sunflower: It has been independently revived, its 2006 cast album is beloved by fans, and now the musical gets its homecoming. Nehls’ opus will return to the town that inspired it, thanks to the sponsorship of National City Bank. Trailer Park will play for one night only at Uniontown’s State Theatre Center for the Arts—an added bonus to seeing the show: The State Theatre, which opened in 1922, is a small movie palace designed by noted architect Thomas Lamb.

Reflecting on his musical playing in his hometown, Nehls offers: “It’s kind of crazy. It’s a part of that [touring] circuit, but I never thought it would end up right there.” In fact, Nehls remembers performing at the State Theatre as a child, usually for Easter sunrise services. Tragically, Nehls won’t be able to see the show himself; he’s currently music director for a Florida production of Smokey Joe’s Café. His father, Ronald Nehls, is a former Fayette County commissioner, and his mother, Darlene Duall, worked at Uniontown Hospital; they still live in the area and plan to attend the show in David’s stead.

So what exactly is The Great American Trailer Park Musical? In recent years, musical composers have shown affection for the world’s grimmer lifestyles. Les Misérables was set in Parisian slums. Urinetown: The Musical was a parable of poverty and power in a small town. And Pittsburgh’s own Duquesne University Red Masquers took show tunes to the streets with Homeless: The Musical. But nobody’s taken on the trailer park—that ubiquitous cluster of wheeled houses rusting on the fringe of larger towns. Trailer Park smacks of nachos, Pabst Blue Ribbon and small-town discos.

Nehls has a nomadic lifestyle, splitting his domestic life between Colorado and New York City and staying for extended periods in places like Ohio and Florida for work. He may have found inspiration in rural Pennsylvania, but his setting is Armadillo Acres, a rough patch of Florida real estate. Here we find Jeannie, an agoraphobic TV addict, and her husband, Norbert, who works as a tollbooth collector. Everything is hunky-dory in Armadillo Acres—give or take a “Dr. Phil” overdose and some rollicking domestic disputes—until Pippi shows up. Pippi, an ex-stripper and runaway, is seeking escape from her hectic career in pole dancing. Along the way, we encounter Armadillo’s other strange citizens: Lin, the soon-to-be-widow; Betty, the landlady; and Pickles, the perpetually pregnant teenager.

“A lot of people ask how I feel about making fun of these people,” Nehls says. “And I’m like, ‘Whoa, whoa, whoa, whoa! Nobody’s ever setting out to make fun of anybody. For lack of a better word, we’re kind of exalting these people. It’s an ode to my peops. It informs how you treat people on a daily basis.”

Sure, these people are obsessed with soap operas. Fine, they’re fond of spray-on cheese. And yes, most of them are
catching rays in their lawnchairs instead of looking for jobs. But deep inside, these are good people—and man, can they sing! Nehls’ score calls for doo-wop, R&B, country, rock and blues; the music is fast-paced, and the harmonies are complex.

The best part? Nehls’ witty lyrics, which combine Cole Porter cleverness with a Hot Pockets sensibility. Show-stoppers include “Flushed Down the Pipes” and “This Side of the Tracks.”

This article appears in the March 2008 issue of Pittsburgh Magazine.
Categories: Things To Do